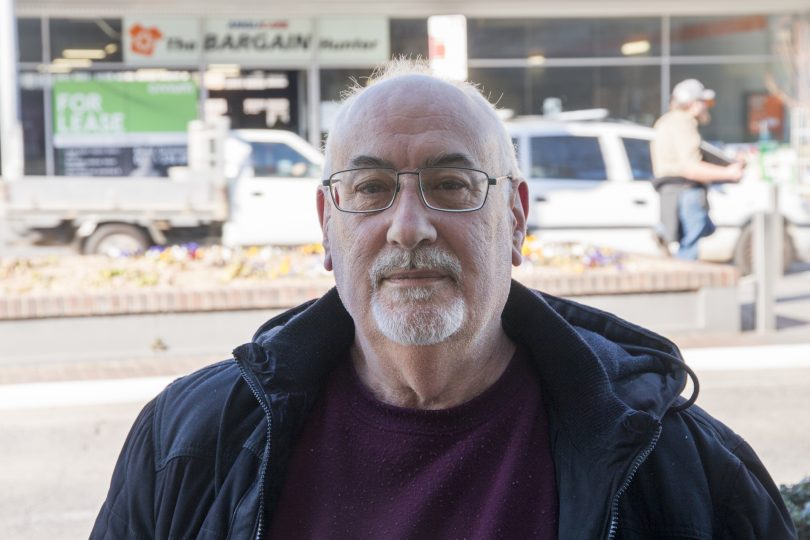 Bill Furneaux says roads and infrastructure are top of mind for him ahead of Saturday’s Eden-Monaro by-election. Photo: Dominic Giannini.

Just days from the Eden-Monaro by-election, what is motivating voters?

Despite the Federal manoeuvring, it’s unsurprising to discover that many people are strongly focused on local issues.

Region Media journalists Edwina Mason, Alex Rea, Karyn Starmer and Dominic Giannini asked voters in Tumbarumba, Tumut, Narooma, Bega, Braidwood and Queanbeyan what was on their minds ahead of the poll on Saturday, 4 July.

Voters at Queanbeyan’s early polling station were focused on what the candidates would be doing for one of regional NSW’s fastest growing areas.

Bill Furneaux nominated bushfire recovery, roads and infrastructure. “I live out of town so roads are a big issue,” he said. “Captains Flat Road: we got funding for it but we can thank [state MP John] Barilaro for that. It was long overdue and it’s still not going to be enough to fix what needs to be fixed.”

Peter was also most concerned by local government and development issues, and said he’d seen little of the candidates apart from Trevor Hicks for the National Party.

“Quite frankly, I am a Liberal voter but I did not see [candidate Fiona] Kotvojs in the last election and I own a business in Queanbeyan,” he said. “She should be walking the street and talking to people. I would like to see more of a presence here.

“Jobs are a little bit different here because so many people in our area work in the public service in Canberra so they did not lose their income [during COVID-19 lockdown] as opposed to regional areas and the cities. Jobs are a big thing but we are a little bit protected in that regard. 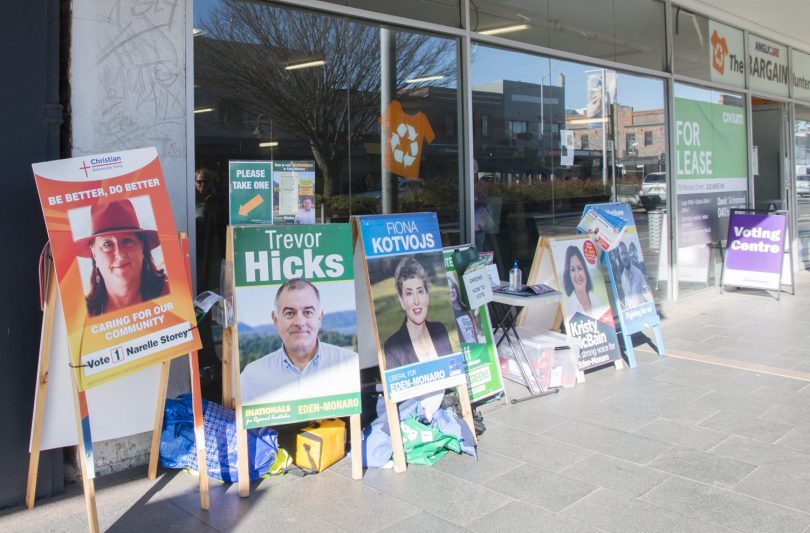 In Braidwood, there’s local concern around water extraction from the Shoalhaven River for the Dargues Reef Gold Mine. “Water is being taken from the river from dawn to dusk and sent to the mine,” said one voter. “It wasn’t long ago the Shoalhaven stopped running.”

Julia Green was looking for “action on global warming, remove support for fossil fuels and consistent support for renewables. Support for local resilience and sustainability, especially food and energy security, respecting and incorporating Indigenous knowledge, culture and truth-telling,” she said.

Steve from Narooma wondered whether candidates would have any influence with the LNP [Liberal-National Party] government, and was concerned about employment opportunities and health facilities, including prioritising the new Moruya Hospital.

Local issues are also a strong focus further over the range. Despite being a state issue, the word on everyone’s lips in Tumbarumba is demergers. The volume of people who named the forced amalgamation with Tumut to form Snowy Valleys Council as a concern far exceeded any other issues.

“Definitely changes need to occur as a result of the bushfires,” said Sophie Gairn. “Our phone tower is still being run by a generator as far as I’m aware. The lack of phone reception meant many local residents could not get information or be contacted during the emergency. This continued for a matter of months for some.

“The recovery has been slow and impacted by COVID-19. We still need help and support here to rebuild from the fires.”

Jess Willis’s family was burnt out twice by the Dunns Road bushfire and they blame private pine plantations for the size of the blaze. She was mostly concerned with fire management issues.

“You’d have to have your head in the sand to not see that these fires grew to the magnitude they did by running through unkempt plantations and national parks,” she said. “For example, we watched two unmanaged plantations burn out of control, hit a managed plantation (thinned) and completely peter out. The fire barely burnt two feet up their trunks.

“This is the only thing that stopped the fire on 4 January. Dad and I sat in on the webinar with the candidates, facilitated by NSW Farmers last week, and this issue wasn’t mentioned once.”

Annelies Leaver agreed. “Private pines border parts of our farm, too,” she said. “If the plantation was cleaned up after thinning and the boundaries cleared, we would not have lost 90 per cent of our arable land, sheds, hay and machinery.”

In Tumut, Phil Barton also nominated fire recovery and the importance of having a local member as part of the governing party. “I see a huge benefit in Fiona [Kotvojs] being our representative in the halls of power,” he said. “And obviously because I am chairman of the Batlow to Tumut Rail Trail, the only help I get is from Fiona.”

But Tim Martin thought the candidates were depressingly similar.

“I don’t know who they are,” he said. “Plenty of issues matter to me but I have very little confidence the government will do anything to get them resolved. But they generally revolve around the general excise tax system, and the way microbreweries are charged for their tax compared to wineries and cideries.