In uncertain times,
we give you certainty.
23 September 2020 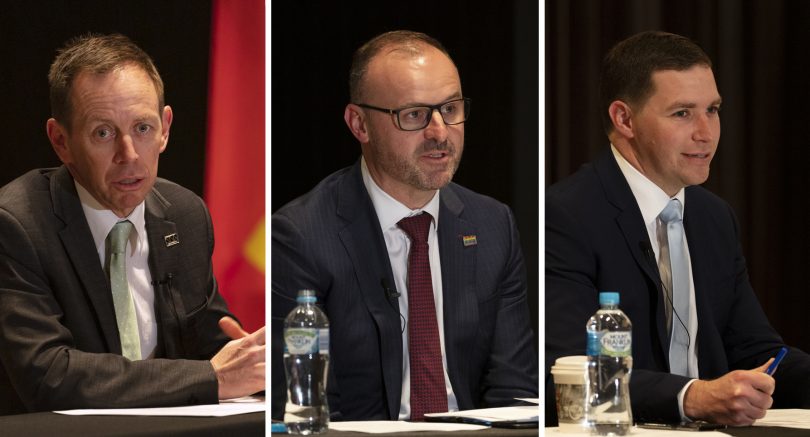 Zoya Patel says with the ACT election looming, her apathy has taken on an even more bitter tinge. Photo: Thomas Lucraft.

I remember a time when elections, both state/territory and federal, would create a surge of energy in the community. Like the revival of a stale marriage, suddenly politicians were interested again in their voters, wooing us with fancy new policies, and promises of playgrounds and funding for swimming pools.

The first election I got to vote in was the 2007 federal election, where I (and many other Australians) was caught up in the heady promise from Kevin Rudd of a progressive change, away from the long, monotonous 11 years of John Howard. I ate my (vegan) democracy sausage with pride that year, and wore my ‘I Voted’ sticker like the badge of honour it was.

Fast forward to today, and after the political upheavals and constant disappointments of the past political decade (for voters with my predilections anyway), the prospect of October’s ACT election leaves me cold and cynical. I drive past the avenues of corflutes thinking how, aside from the currently elected, I don’t know a single thing about any candidate and I’m not sure that I care to find out.

I read policy announcements with a cold detachment, and an overwhelming sense of ‘what does it matter, they’ll just do whatever they want when they’re elected anyway’. My sense of agency in a democratic system has been marred, and I have to wonder if it’s because I’m no longer in the comfortable majority with my views – is this how other people have felt all along?

READ ALSO As social housing projects roll out, beware an attack of the NIMBYs

After the Tony Abbott victory in 2013, it felt like every election, Australian and international, replicated the same feeling of disappointment and gloom. By the time Trump was elected in 2016, I didn’t even have enough interest to feign the tragedy and frustration my left-wing peers felt. And last year, with the shocking (to me, anyway) election of Scott Morrison, I felt more resigned than ever. It seemed to me that the political tone across western democracies was tending further to the right, and my politics was back on the sidelines. Instead of being galvanised for change, I renewed my Netflix subscription and tuned out.

Now, with the ACT election looming, my apathy has taken on an even more bitter tinge. You would think that as a left-wing voter, I would feel in my element in the Territory where the Labor party has reigned for 19 years and it feels hugely unlikely that Alistair Coe will be the Liberal to lead his party to their first election victory in almost two decades.

But instead, the prospect of more of the same, unchallenged and therefore unending, fills me with dread. Does incumbency for such a long period of time lead to complacency? Is there any genuine power left in a democracy where the current Government can feel fairly smug in their likelihood of remaining in power, leaving them with little impetus to woo the public?

Perhaps the issue is that there isn’t the same sense of a big election issue, a single principle to debate on, a line drawn in the sand to guide our voting one way or the other. When the options are more clearly different (Trump v Hilary), it’s easier to feel connected to one side or the other because the gulf between them is significant. In Australia, the two sides look alarmingly similar, so the choice feels less distinct – there are radicals on both sides, but the leadership of both parties is always safely in the centre for the most part.

Is political apathy the inevitable outcome of a frustratingly immovable two-party system? Is a democratic system ever capable of leading to genuine, revolutionary change when needed? Or am I alone in my democratic depression?

If you can’t get enthusiastic about the ACT election, take out a few of your recent rates notices and stare at them for a while.

The Canberra Liberals are just far too religion and right wing for Canberra. They need to reform and become electable and put up some actual talent from outside their “faith” groups. Running a church fete is great but we need a little more from a government.

There is a large proportion of religious people in Canberra especially Christians. Why wouldn’t the liberals try to appeal to them?

Being too religious and right wing, whatever that means, is a claim frequently made by Labor/Greens of the Liberals, but without details or evidence. In fact one of the Liberal candidates is wearing a turban which indicates they are recruiting widely from the community. Fear of change seems to prompt fear-mongering.

Opposition to same sex marriage (for example) is not exclusive to Christianity. Faiths that are sometimes violently opposed to each other can unite in countries like Australia in an effort to fight against things they both consider to be sinful.

Because our democracy works. Both sides of politics pretty accurately track the will of the people, both know that indulging their preferred extremism means losing votes, which is as it should be.

The reason Trump and Hillary were different is because, in great degree, US democracy doesn’t work. Trump was not a republican: he was a protest candidate.

Beats me why people complain when things are going so great down here in Oz.

A conservative is someone who is averse to change. The Labor Party has now held government in Canberra for 19 years, proving that the majority of Canberra voters are the most conservative in Australia.
Labor/Greens has become the party of choice for staid, status quo loving, risk averse, fretful, oh my goodness we can’t risk change, conservatives.
If you don’t want to be a conservative – then be a radical and vote for change.

That’s pretty sad if that’s all the Libs can muster after 20 years, that they’re “different”. Perhaps if they were actually worth voting for?

I know it’s hard to change when one has been voting in the same party for 19 years but when the facts change, I change my opinion. What do you do?

Also, I find your definition of a “conservative” quite amusing. By that defintion, you could classify an anarchist as a conservative.

Holding true to your values or voting patterns, does not a conservative make.

Acton, Have you ever voted for Labor?

Maya123: Have you ever changed a nappy? Politicians and nappies should be changed regularly for the same reason.

No facts have changed.

Using your analogy, have you ever changed who you vote for? (You didn’t answer the last question.)
To change who one votes for, there needs to be an alternative. Coe is not an alternative.