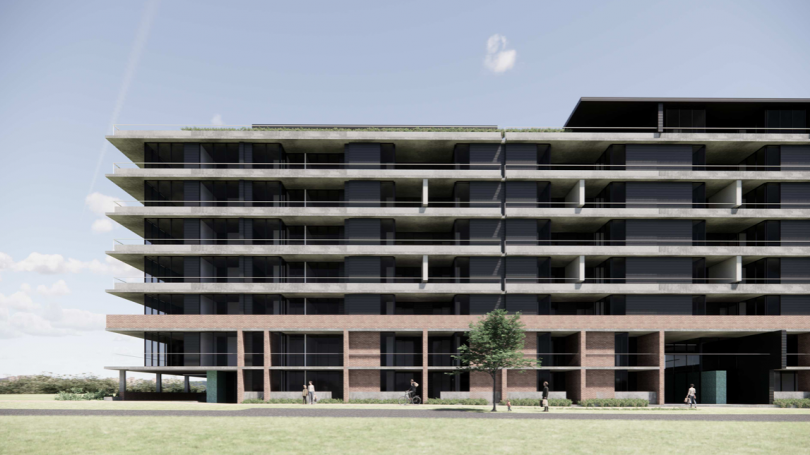 An artist’s impression of the proposal. It comes with a rooftop garden. Images: Stewart Architecture.

Empire Global has lodged plans for a $23 million, eight-storey, mixed-use apartment block in Greenway that will add 146 units to the area, but it faces opposition from nearby residents upset at the building height and the parking and traffic impacts.

According to the pre-DA consultation comment, some also doubt whether there is sufficient demand to warrant the development.

The proposal is for a rear section of Block 2 Section 57 at 305 Anketell Street, fronting Limburg Way near the lake. The block is mostly cleared of vegetation and consists of a Wilson’s car park and Margaret Guilfoyle House, which will be retained, as will half of the car park.

This will be Stage 1 of development on the 7279 square metre site, which was the subject of a previous proposal from the same developer in 2017 for 375 units over four buildings of seven and eight storeys and 400 car spaces.

The DA says Empire Global is now staging the development as demand needs. 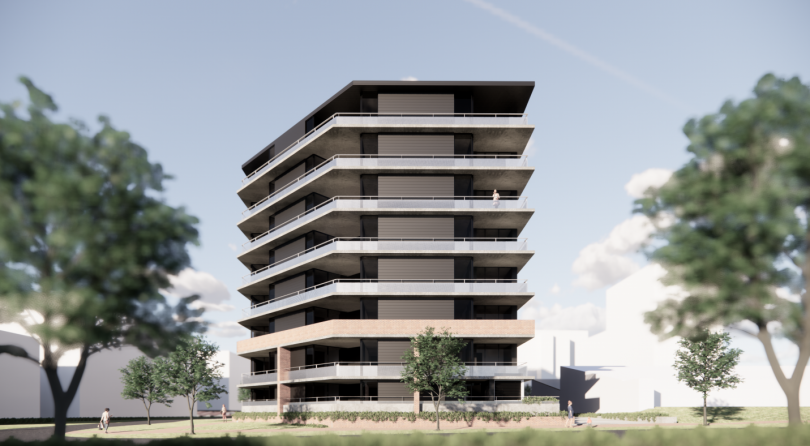 Another view of the proposal, Stage 1 of an overall development plan for the block.

The ground floor will be given over to shops such as a convenience store for residents to activate the street frontage.

The building steps down towards the south, and a right of way easement of about 20 metres separates the southern boundary of the site from the neighbouring building.

Strips of open space are planned on Reed Street and Limburg Way, while a rooftop garden is proposed.

Two levels of basement parking will provide 160 spaces, including 15 accessible, as well as cages for bicycles. 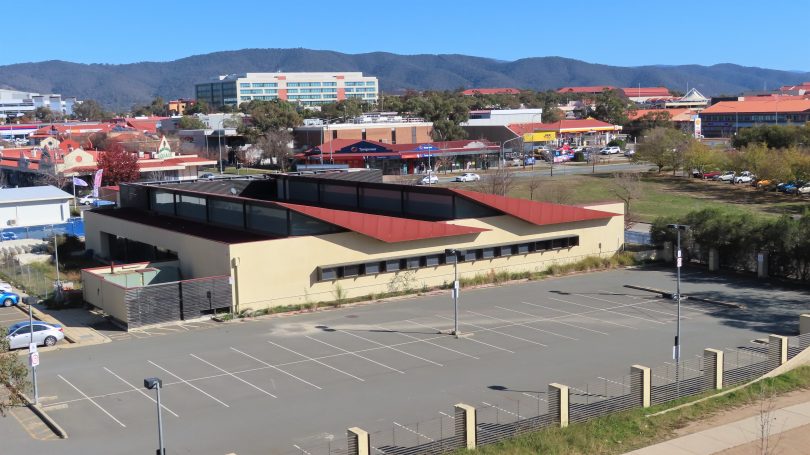 The site in front of Margaret Guilfoyle House where the development is planned.

The traffic report estimates the daily traffic generation of the site, including the new residential block and retained commercial office area, at 1342 vehicles per day and 85 an hour in peak periods, which the reports says can be accommodated.

Despite concerns the development will increase pressures on parking in the area, the traffic reports note that the number of spaces is more than required and that parking also be available in the car park retained on site.

According to the community consultation, residents in the neighbouring SQ1 complex fear they will be overshadowed, and their views and privacy affected.

But the DA’s shadow diagrams show limited overshadowing of the SQ1 development allowing reasonable levels of sunlight in the morning and afternoons.

It also says the building height is within the precinct Code and that the Territory Plan does not consider a ‘right to a view’.

Nearby residents also fear development creep and believe community facilities would be a better use for the site.

The proponent also wants to change the lease to allow residential use.

The design isn’t breathtaking, but these will be fairly affordable so I think for the price point it looks okay.

The part I can’t get over is the residents at SQ1 complaining about views and overshadowing… have they forgotten what building they live in?

Greedy developers. Already a glut starting to appear in this market.

Not to mention it’s bloody ugly to look at!

If people want better design and better quality then they should support the smaller boutique developers pushing envelope. But this usually costs little extra than the norm. Unfortunately people just go with the cheapest they can find and so these mediocre developments continue on.

It’s already a shemozzle around the roads in that zone at peak hour. I’m OK for them to Build extra housing in Tuggeranong (it’s needed) but please also ensure there is adequate infrastructure to support the additional people.

Satisfactory Infrastructure and amenities are sadly lacking in the area.

The only problem I have with it, is that its fugly!!!

And the parking for visitors and essential services? Bunnings is already full.

The ones opposite bunnings are still largely vacant. The developers were even offering 30k visa cards to people to just buy in and get them off their books

probably will become the 'great wall' of Tuggeranong 6months after its built!

I thought Empire Global went bankrupt? Or is Geocon backing them again like they are in Gungahlin?? And changing plans to squeeze more apartments in etc with less parking! 🤔

I encourage everyone to go onto the ACT Planning website and let them know your concerns – traffic, lack of parking, overshadowing etc. Unfortunately these people sit in their offices and make decisions on unrealistic reports that are presented to them. They should come out and see the real situation. Firstly, as a visitor, they will be able to experience the trouble of getting a parking spot, first hand.

And will they give something back to the community of Tuggeranong? Or is that not asked of these profit making developers anymore?

Yet another unimaginative concrete box. Can't the architects come up with something that is pleasing to look at? If people have to live all squished together, at least the building should be attractive!!

Going to look awesome with everyone’s washing on the balcony... 👌🏼

Of course people will whinge

Of course the design is going to be basic. I'm not a huge fan but it isn't terrible. When you are selling 1 bed units for $300k, no one in Tuggeranong is going to pay more for a great design for an extra 100k per unit. The reason they stick with up and down designs is its quicker and cheaper to build.

Tom Munro - 1 hour ago
Conrado Pengilley Nothing to do with ACT government. It’s NCA land and would be federally funded. View
Brice Smith - 10 hours ago
Malcolm Snow is a conservative. Got nothing to do with Barr. View
Brice Smith - 10 hours ago
Good old conservative Malcolm Snow, strikes again. That’s the type of dumbassery we get from the Libs... View
Property 7

Paroksh Datta Prasad - 3 hours ago
Adam Burzynski I called it in 2013 hehe View
Adam Burzynski - 3 hours ago
Paroksh it has begun.... View
Scott Humphries - 19 hours ago
"Braddon of the south" . So the light industry and commercial businesses will eventually be pushed out by apartments, just as... View
ACT Election 15

Darron Marks - 4 hours ago
Schools being closed I would assume is a direct reflection of the change from the Southside being the former nappy belt of th... View
Evan Hawke - 4 hours ago
Darron Marks Yep, as the Government has been putting in great infrastructure in Gungahlin they have been downgrading the infr... View
Darron Marks - 12 hours ago
When the construction moves so will the priorities for Government to build new infastructure. And it would have been the same... View
News 14

Jess Peil - 14 hours ago
This is so exciting! View
Roland De Saxe - 17 hours ago
Great idea for Eden area View
Talla Mc Bogan - 22 hours ago
happened in the otways ,, mountain bikes took the moto tracks ,, they only use a small area though ,, so plenty of moto track... View
Opinion 32

@The_RiotACT @The_RiotACT
When the @BrumbiesRugby won the Super Rugby AU competition, the inevitable question was asked: how would they have fared against the Kiwis? Tim Gavel ponders what might have been https://t.co/enysfEZ1Si (3 hours ago)

@The_RiotACT @The_RiotACT
Are you ready to try a new sport? Kimberly Lennard tells what it was like to try softball for the first time https://t.co/xElifKJU5D (13 hours ago)