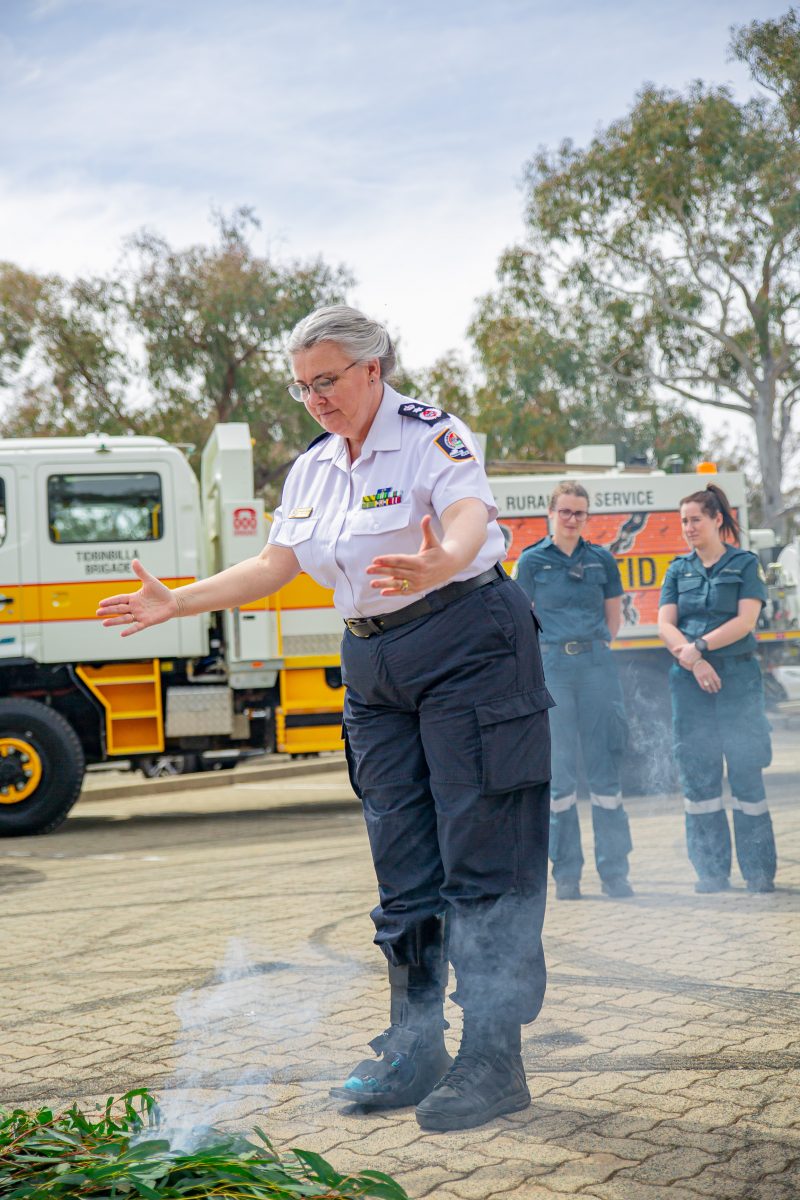 The ACT Emergency Services Agency Commissioner, Georgeina Whelan, has moved to reassure a worried Canberra community over its fears that fires to the south and west of the ACT border will pose a threat to the community.

The commissioner made the comments while addressing the media this afternoon (10 January).

“I absolutely acknowledge the anxiety right across our community. I understand the stress. I appreciate the concern. As the ESA Commissioner, as a wife and as a mother of four children, I’m managing my family as you are managing yours,” Commissioner Whelan said.

“I’m also managing many emergency services staff who have lived through the 2003 bushfires, so let’s work through this together as a team.”

The Commissioner and the Chief Minister Andrew Barr both reiterated that the fires do not currently pose an immediate threat to homes in the ACT.

“I stress the point that I have made on several occasions,” Commissioner Whelan said.

“These fires are unpredictable. The weather is unpredictable and I ask Canberrans to remain alert to the fact that I cannot guarantee fires will not encroach our borders and will not reach our urban interface.”

Commissioner Whelan said while there have been two grass and bush fires in Canberra today, they were extinguished very quickly.

There are four main fire grounds the ESA is keeping a close eye on with their NSW Rural Fire Service colleagues. These fires continue to burn to the west and south-west of Canberra’s border. 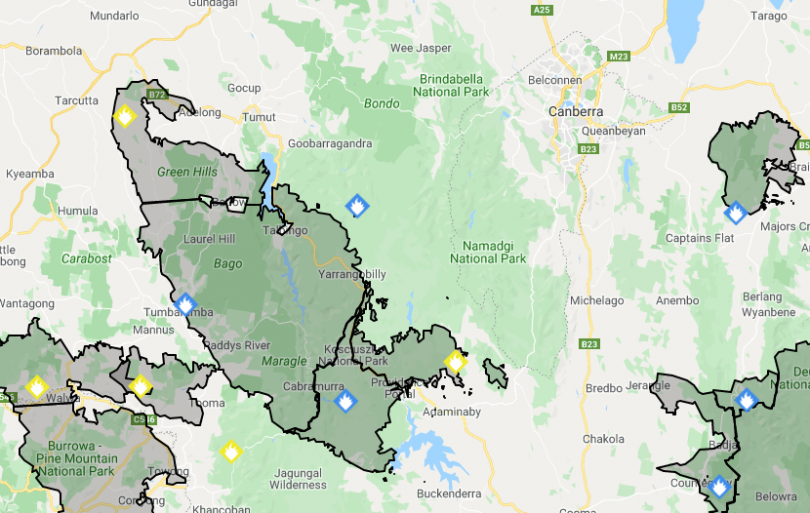 A screenshot of the fires burning near the ACT border as of 5:00 pm, 10 January. Image: NSW RFS.

The Atkinson Fire, at advice level, is burning 20 km west of the ACT border and 45 km from urban areas. The Commissioner said this fire has increased by 100 per cent since yesterday and there is fire activity on all edges of the fire ground. The fire is being fire-bombed from the air only, as the terrain makes on-ground firefighting impossible.

The Mt Morgan Fire is also burning to the south-west of Canberra. Commissioner Whelan said there was no active fire front at 2:00 pm today.

The third fire is the Adaminaby Complex Fire, which is the closest to the ACT’s southern border. The Commissioner said this fire is 4 km from the southern ACT border and 45 km from urban areas. Fire crews are working on small spot fires being fuelled by north-west winds. A southerly change later this evening may push the fire to the north towards the ACT border. There are more than 100 firefighters and heavy appliances working to establish containment lines ahead of the wind change.

The Dunns Road Fire is 50 km from Canberra’s urban area. It is a large fire that has already burnt more than 300,000 hectares. There are more than 50 heavy plant vehicles establishing containment lines. There are currently no fires on the eastern edge of the fire ground, but Commissioner Whelan said they will monitor the fire closely during the next 12-24 hours.

There is also fire activity near Blowering Dam and it is expected that the Hume Highway may be closed.

There are also very large aircraft and the ACT’s Firebird 100 helicopter working out of Canberra Airport to drop fire retardant and perform surveillance activities.

Fires in the vicinity of the ACT are beginning to increase in activity as shown in this satellite image. For information on fires in NSW, refer to the NSW RFS: https://t.co/DvrnV4ohGY ACT Emergency Information: https://t.co/szD5NKqJ8h pic.twitter.com/XvIGGWUWiw

The Commissioner said she would like to thank the community for its support of her firefighters and all the support staff and volunteers from across the ACT have given their efforts in working to keep the community safe.

“As the commissioner, I now ask the media to work with me to help keep our community alert and not alarmed,” Commissioner Whelan said.

“I have committed to keeping the community informed and up to date about what I know and as soon as I know it, and I ask the community and the media to continue to work with the ESA on what we acknowledge is an unprecedented event.

“I ask this as I do not want any misinformation to undermine the confidence of the community, the firefighters and those providing support, day in and day out.”

This follows confirmed reports of a small grass fire near Woodcock Drive and Preddey Way at Gordon today.

Following analysis of the scene, police and fire investigators believe the fire was deliberately lit. The circumstances surrounding the fire are being investigated.

Assistant Commissioner Ray Johnson said police will continue to patrol specific areas in the ACT during total fire bans to deter and detect any suspicious activity or anti-social behaviour.

Police ask that anyone who may have witnessed the incident or has information about the fire, including CCTV footage or dashcam footage from around the area, to contact Crime Stoppers on 1800 333 000, or via the Crime Stoppers ACT website. Please quote 6483281. Information can be provided anonymously.

I just looked at the BOM weather radar and it shows extensive smoke coming from a line of fires to the south of Canberra. A new fire has started just south west of Mt Bimberi and the wind in the area is about 20 kmh from the south. There is very little detail on the NSW RFS maps howver the Adaminaby Copmplex fire has been ” threat upgraded” and it would appear that fires are again burning on the eastern edge of the fire front.

I would like to know where the containment lines are being contstructed as the Dunns Rd Fire must now be less than 40 kms from urban Canberra.

Why isn’t there back-burning underway along the Murrumbidgee corridor? I know they are doing their best but it looks like another 2003 fait accompli coming up.

Lynne McLenaghan Lynne here is another update, posted 1 hour ago (8pm as I type this). Advice is suburbs OK at this stage but to be ready for any change in conditions overnight.

Please! No repeat of 2003! Government to call it! We suffered too much because of sitting on hands and not relinquishing power to the Fire Commisioner!!!

Ursula Gamal in a state of alert as we are in she does have the power. I watched a live stream last weekend of the Chief Minister handing it over to her.

Ursula Gamal if you follow the ESA fb page you will see this capable and reassuring woman most definitely has it under control.

Jose Black - 2 hours ago
The ACT Greens have a major policy on supporting the community sector (including youth and mental health services) and giving... View
Ghanaian Aussies - 8 hours ago
Tom Munro Bullying someone who identifies differently to them is what I am talking about. This is not a fair go for all. So i... View
catder - 11 hours ago
Bethany Williams your post exposes you as a hypocrite that knows nothing. We know there are members of the Libs who are conse... View
Food & Wine 30

theroundone - 15 hours ago
“This is absolutely not gang-related. I’ve not seen any information or evidence to say that this is gang-related,” Det... View
Business 4

ACT out of the fire danger and into the storm