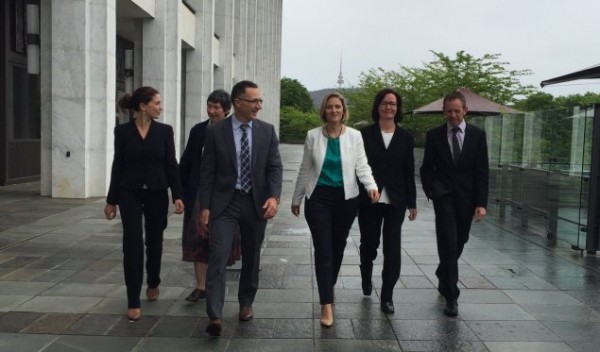 The Greens have confirmed that Canberra-born economist and former United Nations humanitarian adviser Christina Hobbs will battle it out with Liberal incumbent Zed Seselja for the non-Labor ACT Senate slot come the next Federal election.

Federal Greens Leader Richard Di Natale announced her candidacy and introduced all four ACT Greens candidates for the next Federal election, with ACT Greens MLA Shane Rattenbury also on hand.
Ms Hobbs said the Greens were the party for mainstream progressive Australians and Canberran voters.
“I was born in Canberra, I’ve lived here most of my life, and I think like many Canberrans I’ve really disapproved of what we’ve seen in politics over the last couple of years: the negative politics of the Abbott government, the destructive politics of the Abbott government, politics that have been continued today by Canberra Senator Zed Seselja,” she said.
“I want to stand up for issues that I’ve really worked on for much of my life. Issues like creating economic justice across society, issues like tackling climate change, and shifting our economy towards an innovative, knowledge-based economy, an economy that is driven by renewable energy.
“I believe that my values are very much in line with the values of most forward-thinking, progressive Canberrans, and I truly look forward to providing an alternative in the Senate.”
Afterwards, RiotACT asked the Greens’ lead Senate candidate what she thought of Federal Government moves to shift sections of the public service out of Canberra.
“It’s terrible for Canberra and not in the best interest of the public service,” Ms Hobbs said, linking it to “a push to undermine the independence and value of the public service with a trend to outsourcing and casualization.”
She said such issues had been brought home to her as her own mother had been made redundant from a public service role at 55 and brought back in as a contractor.
Ms Hobbs has lived most of her life in Tuggeranong and graduated from the ANU with a double degree in science and commerce.
She undertook postgraduate studies at the University of London and began her career with Deloitte as a financial analyst and strategy adviser. She was Deloitte Young Business Woman of the Year in 2008.
She spent six years as an economist and food security expert with the UN World Food Programme across Africa, Asia and the Middle East and is a board director of the Global Women’s Project.
In 2014, Ms Hobbs helped establish Future Super, a Canberra-based super fund that is the first in Australia not to invest in fossil fuels. She is still an adviser to that company.
The Greens support candidate in the Senate is Medical Association for Prevention of War Vice President Dr Sue Wareham OAM.
Immigration lawyer Carly Anne Saeedi is the candidate for Fraser, with Patricia Cahill, who has a background in urban planning and public policy, running for the seat of Canberra.

Ol L - 14 minutes ago
But apparently according to Mr Barr there is no link between increasing landlords costs via land tax and any rise in rents? I... View
Opinion 18

FB - 28 minutes ago
Canberra is certainly an odd place. Where else could you start a business getting people to pay $10 for a toasted sandwich. I... View
Ivana Ryan - 2 hours ago
Toasted sandwich and a coffee 😋 Bojana Simic View
Christopher Rompotis - 3 hours ago
Hannah next brunch catch up? 🤔 View
Lifestyle 27

Geoff N Narelle - 56 minutes ago
I think that the author of the article has romanticised the story somewhat. It was probably a 20 minute bike ride each way on... View
Food & Wine 3

Hume a microcosm of Federal election