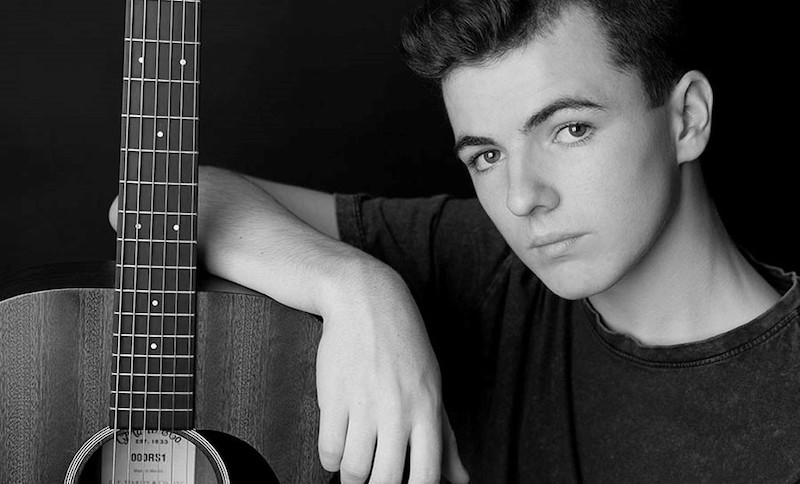 Harry Cleverdon has a bright future ahead of him. Photo: Supplied.

One of the Canberra region’s most exciting emerging artists has taken on the youth scourge of social media in his debut extended play album.

Harry Cleverdon’s six-track EP From My Side of the Stage tackles the issue of how young lives can be destroyed after experiencing rejection by their peer groups on social media and through phone texts.

From My Side of the Stage showcases the 17-year-old musician and songwriter’s exhilarating keyboard skills which have been polished by multiple scholarships from the Young Regional School of Music in his hometown of Young, and the Sydney Conservatorium of Music.

His acoustic guitar-playing is self-taught and is of an equally high standard. When delivered so emphatically by his great voice and music, his lyrics are a powerful antidote to the negative effects social media can have:

Well I feel I’m slowly sinking down
while my world quickly closes in
and I need help but I don’t wanna ask for it
cause some people might call me weak
So help me and don’t let me fall away
cause I need someone there to save my day.

Cleverdon hired Canberra boutique video production company Sixth Row after director Rowen Grant pitched an idea for a video with two actors portraying the story behind ‘Hit Me While I’m Down’, the penultimate song on From My Side of the Stage.

He resisted friends and family urgings to tone down the harsh messaging and swearing in the video that sets the scene for what unfolds.

“We wanted to stick with that because … well … that’s just how people are … worse than that a lot of the time,” he says. “We wanted to keep that in it so people go ‘Yeah, that’s what happens’. It is confronting. It is real.”

The son of non-musical parents, Cleverdon was born with a gift for music which is now shining brightly thanks to countless performances throughout the Central West, Riverina, Canberra and region, Sydney and Melbourne.

He has won talent quests, performed at weddings, festivals, busking on the street, pubs, auditoriums and cafes. So determined to record his music, he saved $11,000 from weekend gigs, and built with his own hands a recording studio in the family’s garage where he has arranged, recorded and mixed his music.

Gundaroo Music Festival last month presented Cleverdon as an emerging artist on the same line-up as Joe Camilleri and The Black Sorrows.

In a review of the album, online music and youth culture magazine Happy Mag, said: “Keep an eye on this name, we’re expecting big things.”

Australian country music star Troy Cassar-Daley and Australia’s 2017 Eurovision entrant Isiah Firebrace have invited Cleverdon to open concerts in Young and Orange. Last year, he performed at the Canberra Raiders Members lounge at home games, and he continues to travel widely for gigs.

He devotes just about every waking hour between school and music.

But as suddenly as Cleverdon has leapt to prominence, his star is set to fade, at least for a year. His Year 12 HSC studies in 2020 must take precedence over his promising music career.

“School and music at the same time is borderline impossible,” Cleverdon says.

One of two children, he sometimes helps his father Charlie on the family’s black angus cattle property. His mother Elke is an accountant. “Mum and Dad are hugely important,” Cleverdon says. “I don’t think I could do what I am doing without them.”

“He has a gift. We knew he was something special,” Mr Bolger says. “I remember before I was at the school of music, attending concerts with fellow parents, and people coming from Sydney to offer him scholarships, they knew he had talent.”

“He explained to me the whole biology of how the voice works, and helped me understand how to use it better,” Cleverdon says.

After the HSC, the young musician plans a gap year, in which he will be approaching music labels while continuing on a journey that so far promises an exciting future.

Working-class teacher CJ gets an ARIA nomination from Barnsey