Expert's talk on firestorm behaviour could be a life-saver 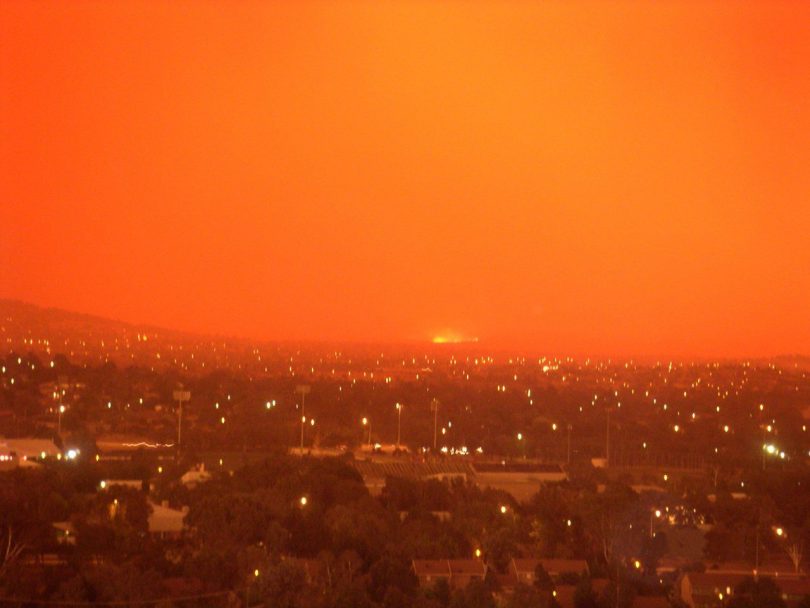 The 2003 Canberra bushfires was not a rare event and conditions are looking ominous for the summer.

As the ACT prepares for what could be a horror fire season after a dry winter with a dire forecast of warmer and drier-than-usual conditions ahead, a public address on fire behaviour at the Flynn Community Hall on Thursday 27 September may possibly be lifesaving.

Volunteer firefighter and UNSW researcher Associate Professor Jason Sharples, an expert in various aspects of extreme and dynamic bushfire propagation, and the development of large conflagrations and bushfire risk management, will outline the current knowledge of how, where and why such extreme fires as the 2003 Canberra firestorm occur.

On 18 January 2003, four lives were lost, 490 were injured and 500 houses were destroyed by bushfires on Canberra’s western edge.

Many survivors suffered Post Traumatic Stress Disorder for years after.

The Ginninderra Falls Association, which will host the talk, says fires have affected Canberra, invariably, on the western side with major fires occurring in 1903, 1926, 1927 and 1939, three times in 1952, and in 2001 and 2003. Most of the fires were started by lightning strikes during dry seasons that followed a warm, dry winter and spring like the ACT is experiencing this year and most were accompanied by very strong winds. The 2003 fires, therefore, were not a one-in-100-year event.

At the time, a number of unusual fires were observed in which bushfire spread sideways across the wind direction. It was accompanied by rapid and intense downwind fire spread caused by embers.

This unusual fire behaviour occurred on steep sheltered slopes facing away from the wind where the background wind was virtually perpendicular to the terrain. Subsequently, researchers have been working to understand what made this fire behave so differently from the usual bushfire.

A firestorm results when the plume generated by the heat of a large fire develops characteristics similar to a thunderstorm. The technical term for a firestorm is ‘pyrocumulonimbus’, which literally translates as ‘fire thunderstorm’.

Firestorms involve significant coupling with the atmosphere, which can modify local weather patterns. For example, firestorm events can result in more erratic and unpredictable winds, mixing down of drier air from the upper levels of the atmosphere, increased potential for firebrand generation and transport, and dry lightning.

Slopes over 20 degrees, such as the gorges along the Murrumbidgee and Molonglo Rivers and the lower reach of Ginninderra Creek, are known to be associated with firestorm behaviour.

The Ginninderry/Parkwood peninsula is surrounded by these steep slopes and exposed to the prevailing north-westerly wind direction. To the west, is the Brindabella Range where lightning strikes frequently start fires which are driven towards the ACT.

Associate Professor Sharples has warned that the fire risk for the Ginninderry housing development has been underestimated.

With conditions again pointing to a dangerous summer, Associate Professor Sharples’ insights and findings will be vital information for anyone living in the ACT’s bushfire-prone areas.

“Associate Professor Sharples has warned that the fire risk for the Ginninderry housing development has been underestimated.”

Maybe this risk would have been scoped thoroughly if the normal EIS had been done. As it turns out the Ginnenderry JV between the ACT Government and Corkhill Bros. development company was exempted from submitting an EIS.

In case anyone who reads this story doesn’t remember 2003:
https://www.youtube.com/watch?v=bi4i8YvMRsc