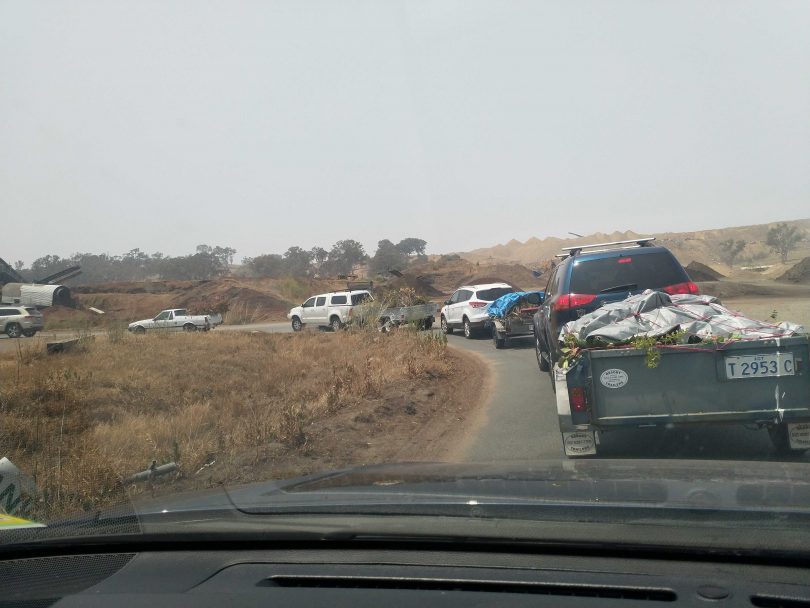 ACT emergency authorities are keeping a close watch on fires across the Brindabella ranges threatening Batlow as they reassure ACT residents that all is being done to prepare for any threat of fire on a dangerous Saturday in the region.

While the South Coast is bracing for a repeat of the devastating New Year’s Eve breakouts, the ACT Government has declared a State of Alert and a Total Fire Ban until midnight Saturday, with rising winds, low humidity and a forecast top of 42 degrees. The fire rating will be Extreme.

Chief Fire Officer Joe Murphy says there are no fires burning in the ACT and the big Dunns Road fire encircling Batlow and a smaller one near Adaminaby to the south were about 100 km from the Canberra urban area.

But the winds will fan them to greater size, and the concern is that they will be driven into Namadgi National Park which is bone dry, although modelling suggests they won’t reach the ACT tomorrow.

Mr Murphy told ABC radio that he could not be certain if or when the fires would reach the ACT, but the park had been well prepared with prescribed burns, maintenance of fire trails and water tanks.

Crews were patrolling the urban interface and the ACT was being surveilled from the air to identify any new ignitions.

The change on Saturday also brings with it the chance of a thunderstorm, and lightning strikes in Namadgi.

The aim will be to identify any new fires immediately and respond with force.

“We are ready for whatever tomorrow brings,” Mr Murphy said.

Ten trucks with 25 crew helping to contain the Dunns Road fire would return to the ACT this evening and a full complement of firefighters from all services would be on standby. 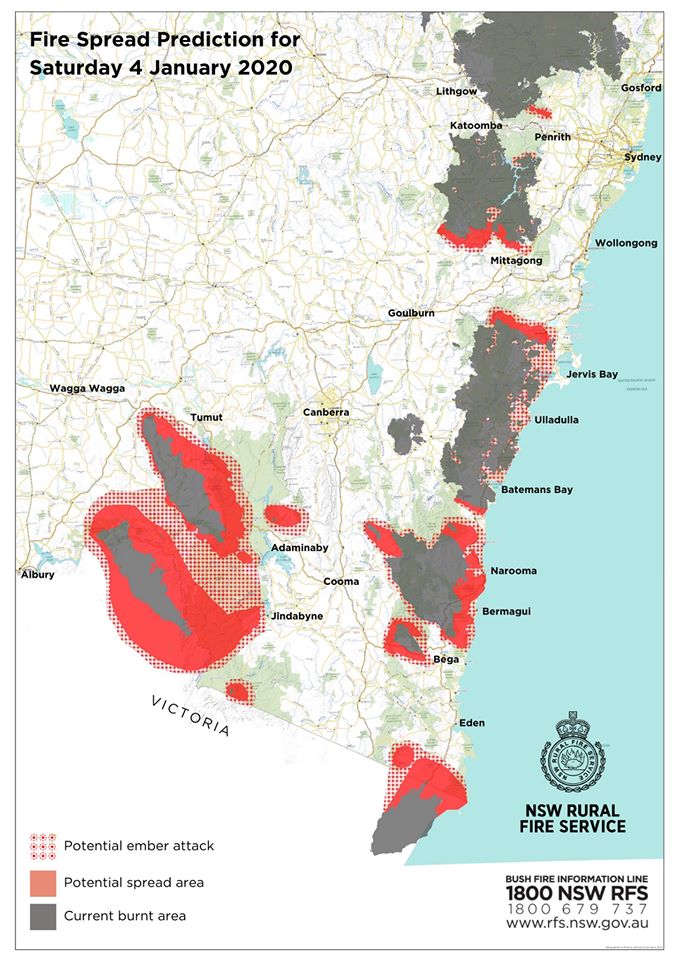 The ACT and NSW were sharing intelligence and the Territory had access to all modelling of the fires to its west.

Emergency Services Commissioner Georgeina Whelan said the ACT was well prepared, evacuation centres had been identified and the community would have very good warning of any fire.

“Once we know, we will alert the community,” she said.

For Canberrans braving the hazardous smoky conditions, 10,000 face masks arrived today, with more on the way.

ACT residents are urged to prepare their properties and download their bushfire survival plan form the ESA website.

It seemed many were taking the situation seriously with queues into the Mugga Way tip this afternoon to dump cleared vegetation and other rubbish from around properties.

For people with livestock such as horses, the evacuation points are the Queanbeyan and Hall showgrounds, with Summernats continuing at EPIC.

For more information on the State of Alert visit the ESA website.

The only threat appears to be the Adaminaby Complex fire which is heading east about 60 kms to Canberra’s south. If the southerly change that’s forecast hits it in the next two hours spotting could be at Lanyon in another 3 hours.

I trust the ESA is onto this because the relevant authorities weren’t on to the potential of the McIntyres Hut in 2003.

Look on their web page for what to do. The operational deployments ( what units come on standby where and when, and stand down) are in rosters communicated within the paid and volunteer brigades but are not usually on the web page as far as I know.

We’ll be fine.. Unless the fire creates its own weather system, ah la 2003.. but it’s not big enough for that.. We’ll be ok.. Drink beer and be merry tomorrow kids,

SP Brogues, people have lost loved ones, kids have lost parents, houses are burnt, more to come, and you choose to provide more comment and hate about an event that has nothing to with current conditions. I have never been to Summernats, but lived in Watson for a few years, smelled the burnout smoke for a few hours, and lived my life and moved on. Time to take a deep deep breath, and focus your life, move on, volunteer to help those in need, instead of wasting your time trying to be noticed on social media. Cheers

Some reassuring words and – unlike the last time – I assume the ACT won’t be coy about accepting offers of help from across the border if things go bad.

Aside from work in Namadgi etc. and the constant messaging to householders, I am not as confident about what has been done (or not done) on public land within suburban Canberra – which should be a priority given what can happen with ember attacks (not just fires spreading from tree crown to tree crown).

I’m not interested in the Summernats intoxicating side effects. I’m more interested to know from some scientific research, how it would have been in the evacuation of thousands of people who needed urgently need to get out of danger if everyone had electric vehicles and in need to charge their cars for the long way to home??

Frank Trapani and where will we all go? Nowhere TO go, so let’s ride it out….all together.

Debbie Thomsen, That is not the case of what happened yesterday in the South Coast when the non residents were told to leave the area before tomorrow, Saturday 04 Jan 2020 and that has involved people in their thousands that had to refill their cars in very overcrowded and out of petrol service station, some of these people, only managed to travel very short distance that took hours in a very tidy traffic jam…I am glad that everyone, cooperated with the instructions to leave the area, because, it makes a lot of difference for the local food supply and for the firefighters..And for their own safe and the relief to be back in their own home, etc..those are true facts..And it need to be fully assessed for a future reaccurance..Now, can we, all enjoy the Summernats please??

Just a quick question. Where is Mr Barr?

Doris Andrews what does that have to do with literally anything? And if you’ve been keeping up to date with the alerts which are broadcast live on Facebook daily you will see he has been with ACT emergency services every day keeping us informed. Do 5 seconds of research before commenting.

Shawn Mulgrue Yes. I was here. At least this time we’re getting advanced warning instead of nothing like in 2003. I went to a 10am movie session to escape the heat only to come outside at midday to Armageddon.

Liane Degville me too! Let’s hope they’re prepared this time!

Suzan Zibar I was in a security patrol car in the area and I can still remember the roar of the fire!

Crazy days but according to the loopy right it was worse 170 years ago.

Boweavil Kat but no worries, their franking credits are OK!!

Meg Joy hi Meg. I am prepping gutters and fire plan just in case but RFS is forecasting we should be ok. Fires near me hasn’t updated the adaminaby fire much since last night. But I drove through it all yesterday in a supply run – it is definitely worth being prepared to go if things turn out unexpected. Get your fire plan in order and hey, good practice if nothing else 🙂

Meg Joy it is a wooly, however the Braidwood fire has been going for weeks under 50kms from Canberra and closer to Queanbeyan

Richard Willcoxson not in a fire storm.

Richard Willcoxson Hi Richard. We have favourable norwesters forecast tomorrow and a cool change with rain on Monday so we should be good. But the last Canberra bushfires, and the Clyde mountain fire just three days ago, spread 30km in a single morning. If Clyde mountain hadn’t hit the ocean at Pretty Point and Rosedale (I drove in and out yesterday to drop supplies) it would have kept going a lot further.

Ce-Ce Edwards this is the latest update