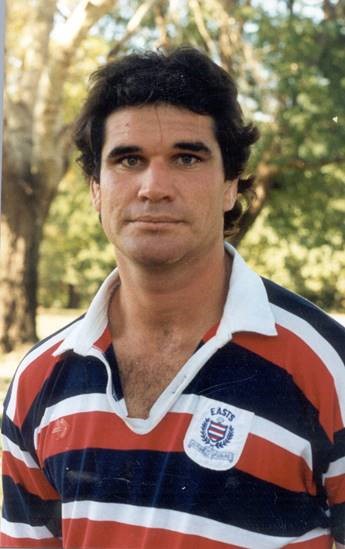 Only injury prevented Mark McInnes, a towering back-rower, from playing for the Wallabies.

The man known to all and sundry as ‘Spider’ died earlier this week.

In a stellar career, 1989 was a standout. That year Mark captained Easts, was named the best player in the ACT competition, and was selected in the Wallaby squad for the tour of Canada and France.

He didn’t end up playing a test but played in four non-test matches on that tour, against the North American Wolverines, Languedoc Regional Selection, Auvergne Selection and Ile de France.

Such was his emergence that it was predicted that Mark would break into the test line-up the following year.

I well remember the events that unfolded in 1990 when he suffered a serious knee injury playing for the ACT against NSW.

Had it not been for this injury, rugby analysts believe he would have certainly been selected as the number 8 against France, the United States and the All Blacks. The injury curtailed his aspirations and he struggled to be the same player after that.

Mark’s football career began at the great Canberra nursery, St Edmunds College, whose ex-students include the likes of Ricky Stuart, George Gregan and David Furner. Mark played college rugby from 1971 to 1981 and in his last year at college played for the ACT Schoolboys XV.

From 1982 to 1985 he played for the Vikings club in Wollongong and the Port Hacking club in the Sydney grade competition while he completed his apprenticeship as a fitter and turner.

He made his first-grade debut for Easts in 1986 and was selected in the ACT senior representative XV the same year. He won the Tommy Byrne Memorial Trophy as the best and fairest first grade player in the ACT competition in 1987 and was appointed captain of Easts 1st Grade in 1989, the year he also won the prestigious MacDougall Medal.

Mark played 36 representative games for the ACT between 1986 and 1990 and also played for Wasps (England) and Peebles (Scotland).

The memories, though, that many will have is the image of a player as tough as they come and with the ability to dominate a game through sheer tenacity.

ACT Rugby has lost an element of its soul, a connection with the pre-Brumbies days with the passing of Mark at the age of 56 years.

What a rugby player he was !

It was very Sad news to hear of Marks (Baghdad,s, /Spider) McInnes passing. A wonderful Rugby Spirit that has left all who he associated with fond memories of how to play and tour in style. My thoughts go to his family , Tram, WIll and Tom, who he thought the world of . For Now, Rest In Peace Mark after a well played knock.

Thinking of his family, especially Will and Tom.xx

When asked ‘what makes you such a good player?’ Spider said ‘every game I have to show that I am the best player on the field’. And to Easts’ benefit, he certainly did. No more coffees at Kaleen shops… RIP, mate.

Too young, and always a happy football mad kid, I grew up across the road in Hopetoun Circuit Yarralumla from the McInnes RIP

Vanessa Schultz Hi Vanessa, it is very sad time for all, regards Jeanne

Please give my respect to the family love Vanessa x

So sad, a true gentleman

One of the nicest blokes i ever worked with.

Martin Smith - 22 minutes ago
Used to be a top-notch eatery ... not so much anymore. The current cafe staff appear to have given up interest. Maybe the thi... View
Rebecca Southwell - 2 hours ago
Angela Mcintyre, and we were talking about this restaurant this morning View
Elle Roberts - 4 hours ago
I had my 21st birthday there. 🍾... View
News 3

CityDweller - 1 hour ago
Well if you look at the disaster being created along Parkes Way and Anzac Parade, we would end up with another apartment buil... View
News 6

bj_ACT - 2 hours ago
Who would have thought that taking buses off the Tuggeranong Parkway and also making peoples peak hour bus commute from Tugge... View
Capital Retro - 3 hours ago
Why is it necessary to outsource the decision to consultants at a huge cost to the ratepayers? We have various directorates w... View
yellowredme - 4 hours ago
I drive from West Belconnen to Woden daily doing 24/7 shift work, traffic build up even out of peak hour is becoming more com... View
Community 3

Capital Retro - 3 hours ago
The residents of Conder and suburbs to the south should worry about this proposal as the standing inversion layer that plague... View
consumeradvocatecanberra - 4 hours ago
This is not a NIMBY issue as someone seems to think, but real health dangers which have been recognised. Like the plastics to... View
News 3

Capital Retro - 3 hours ago
I don't think they are into Canberra and mouse plagues usually only occur in any of Australia’s grain growing regions when... View
TimboinOz - 4 hours ago
How far into the ACT have the mice got to? View
Lifestyle 13

Kathy Tozer - 5 hours ago
Well done Robyn, wondered what had happened to you after all these years. View
Courts & Crime 1

54-11 - 6 hours ago
The continuing prosecution of Collaery and Witness K is an absolute disgrace, and is a stain on the character of the Liberal... View
News 2

Capital Retro - 8 hours ago
If our progressive education system extended studies to local history, students would be aware that in the last 80 years, sev... View
show more show less
*Results are based on activity within last 7 days

The head of an electronics store has been sentenced for stealing almost $60,000 from his employer. The agreed facts in...
Community 0

Hot on the wheels of the Queanbeyan sleepbus, Canberra's women's-only pink sleepbus will arrive in less than a month, named...
Property 24

Launching at the end of May, Okami is taking over the large, renovated space that was occupied by Olive at...
Courts & Crime 0

I was recently at an event with friends when I pointed out another attendee who was a person of colour....
News 83

The ACT Greens have proposed lowering the voting age in the ACT, banning or creating dedicated spaces for roadside election...
News 48

@The_RiotACT @The_RiotACT
The ACT Government is expanding its affordable rental scheme despite less than 50 per cent of allocated spots being taken up by landlords https://t.co/9ihv7SkZto (18 minutes ago)

@The_RiotACT @The_RiotACT
Alisa Taylor says you only have to look at the cranes gracing our skyline to realise how integral construction is to Canberra's economy, so it makes sense that the law around this receives specialist attention https://t.co/JRdnU0dcD2 (1 hour ago)