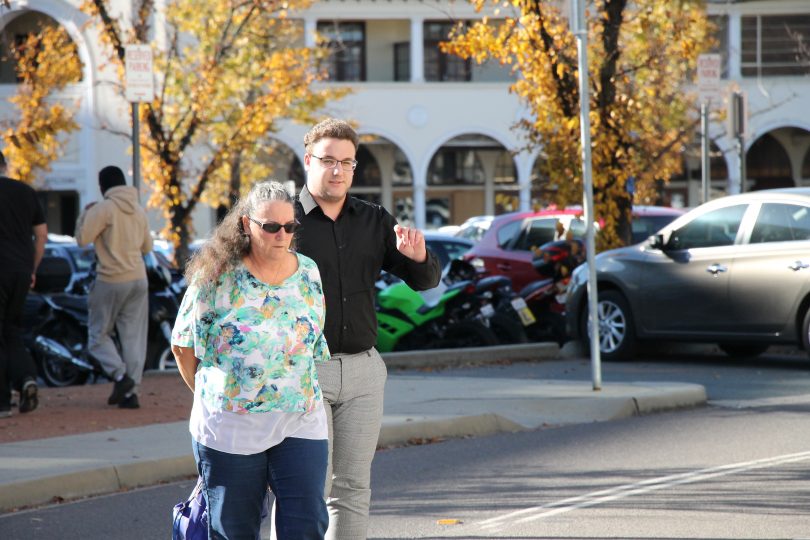 Bradley Bartell enters the ACT Courts on Tuesday afternoon along with a supporter. Photo: Albert McKnight.

A 20-year-old trainee manager at a fast food outlet who had sex with an underage girl will avoid spending time in jail after he was sentenced yesterday (27 April).

Bradley Bartell had only just started training as a shift manager at a Canberra store when he began messaging the 15-year-old girl he supervised early last year.

Justice John Burns, when handing down his judgement, said their messages eventually became sexualised, and in March 2020, Bartell picked her up from her mother’s house and drove her to his home, where she ignored his requests to lie down with him on a bed and cuddle.

Bartell told her he had had sex with other people and asked her about her own sexual history, then later drove her home.

Over the next few days, the two continued messaging each other and Bartell encouraged her to sneak out of her home without her parent’s knowledge.

When she did so, he took her to his home and into his bedroom, undressed the both of them and they had sex. Afterwards, he told her she had to keep the fact they had sex a secret.

Bartell pleaded guilty to a charge of engaging in sexual intercourse with a young person, for which he faced a maximum jail term of 14 years.

On Tuesday, Justice Burns said the victim was harmed by the now 21-year-old’s offence and it was likely she would continue to feel its impacts for some time.

“There is a very real power imbalance between a 20-year-old male and a 15-year-old female, particularly in circumstances where the male is employed to supervise the female in a workplace,” Justice Burns said.

One of his victim’s parents read out a statement the teenager had written for the court detailing the impact the crime had on her, saying it had left her feeling embarrassed and ashamed and had “greatly tainted” her Year 11 experience.

“Every day at school is harder than the previous day,” the teen said.

She said it broke her heart to know her parents knew what had happened to her.

“What was once mine didn’t feel like it would ever be mine again,” she said.

“I lost a part of me that day that I’ll never get back.”

She also spoke about her fear that Bartell could appear at her house again because he had her address.

Justice Burns said while the teenager was getting close to turning 16 when Bartell had sex with her, that did not mitigate the offence.

But he also said Bartell, who was studying a Sport Science degree at university, had acknowledged his actions were wrong and recognised that responsibility had rested with him as an adult.

A clinical psychologist had also said he expressed remorse for his actions.

“In my opinion, you have good prospects for rehabilitation,” Justice Burns told Bartell.

He noted as Bartell would be placed on the sex offenders registry, the consequences of his actions would affect him into the future.

“Of course, you have nobody to blame for this but yourself,” he told Bartell.