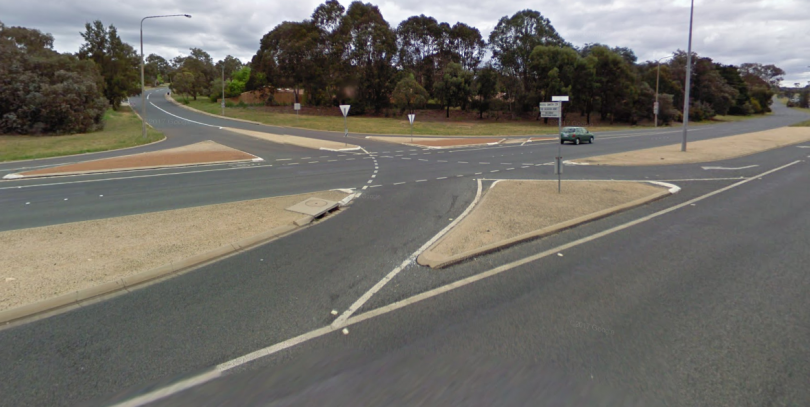 Traffic lights will be installed at the intersection of Southern Cross Drive and Ross Smith Crescent in Scullin. Photo: Google Maps.

The Federal Government will pay $1.8 million to install traffic lights at the intersections of Ross Smith Crescent and Chewings Street along Southern Cross Drive in Scullin.

Deputy Prime Minister and Federal Minister for Transport Michael McCormack said the project will be delivered over the next two financial years under the Federal Government’s 2019-20 Black Spot Program.

Mr McCormack said the Black Spot Program funds safety measures like traffic lights and roundabouts at ‘dangerous’ roads that have been the site of car accidents.

“This funding will substantially improve the safety of Southern Cross Drive in Scullin through signalising two intersections where there has been a high incidence of casualty crashes,” Mr McCormack said.

“This investment is part of the Federal Government’s commitment to building safer roads right across the nation and getting commuters home to their families sooner and safer, no matter where they live.”

The ACT Black Spot Consultative Panel, chaired by ACT Liberal Senator Zed Seselja, reviews the priorities for the program, focusing on intersections that have been the site of a serious crash.

He said road traffic engineers identified that traffic lights would make the intersections safer and reduce some of the accident risks.

“We believe the signalisation of these intersections will make this area much safer,” Mr Seselja said. “The panel looks at crash history, fatalities or serious injuries and we also look at the cost benefits. These upgrades came out on top of the list this year.

“We have a good road network but you do see choke points where the neighbourhood road meets some of these major thoroughfares.”

Last year, $118,000 from the Black Spot Program was also allocated to extend the nose of the side road median island and ban U-turns at intersections on Southern Cross Drive between Kingsford Smith Drive and Coulter Drive in Florey.

Labor Member for Ginninderra Tara Cheyne, who has been campaigning for safer intersections on Southern Cross Drive, welcomed the announced improvements to the intersections but was uncertain whether traffic lights were the right solution.

“Anyone travelling through Scullin, Page or Florey knows just how difficult it can be to enter and exit these suburbs via Southern Cross Drive, particularly during peak traffic times,” Ms Cheyne said.

“Many people have shared with me their experiences navigating these intersections, as well as the accidents and near-misses they have witnessed. Some people avoid the area altogether.

“While traffic lights may be the ideal solution to improve safety, it’s important a proper assessment is done to ensure the best outcome for motorists, cyclists and pedestrians,” Ms Cheyne said.

To nominate a black spot for consideration by the consultative panel, visit the Black Spot Program website.

In Krakow, a major Polish city, the city president has turned off traffic lights in all but two major roundabouts. Traffic, which includes trams, is now flowing much more smoothly and accidents are down.

As someone who uses this intersection several times a day, I really hate the idea of traffic lights. It’s a sledge hammer approach for an issue which only occurs for an hour or two in a 24hr period. I spoke to volunteer who was door knocking and suggested part time traffic lights instead of full time.

They had them in Germany, I thought it was a great idea. As this is only an issue for an hour morning and afternoon why make people sit at red lights when there is no traffic or very light traffic.

Gaynor-Marie Glass they’ve got them down south in Canberra

Two years for two traffic lights? You can build a skyscraper in that time.

I think there has been a fatality at each intersection and many accidents.
At the Ratcliffe Crescent intersection cars actually stop the flow of traffic so they can quickly go through three lanes of traffic and turn at Chewings.
To get from Ross Smith to Ratcliffe the angle doesn’t work for a lot of cars and you can’t see on coming traffic on SC drive. I understand that this is one of the worst intersections in Canberra.
If people avoid these intersections during peak hour, isn’t it better to remedy it so it can be used 24/7?
Given the new suburbs being built, it will only get worse. I’m pleased the funding has come now and we don’t have to argue for money when other priorities emerge.

Problem could be solved if they stopped people turning right at the T intersections. OK to turn left.
Either that or put in roundabouts.
One issue with traffic lights is that at intersections there are often times when their is no traffic able to enter the intersection as there are no cars on the roads with a green light. Yet there are cars waiting facing a red light.

There is enough space for longer speeding lanes and safe areas for you to cross and wait to merge, maybe these other alternatives should be explored first?
These intersections are indeed terrible and depending on the time you better change your route to use alternative ways that will get you to the other side faster and safer, even if you have to drive up to 1km more.

Turning it into another Drakeford Drive. What happened to roundabouts?

Catherine Campbell traffic volumes is what has happened.

We have seen a lot of busy roads chopped up into infinite intersections to manage traffic. In my opinion, it’s not a solution in the longer run where, vehicles would just line up at every intersection making it far worse. I suppose ACT government should look at other options like underpass and overpass to not only mitigate traffic but also to have a free flow

Deepak Ramanath not really practical on roads like southern cross drive. People need to accept that roads cannot flow as freely as they once did simple because there are more people.

Ashley Wright I agree to a certain extent, however as the city grows the infrastructure needs to grow as well. You cannot limit the population growth and that is something every infrastructure has to account for.

Deepak Ramanath don’t disagree, but roads like southern cross are not the ones where that is practical or really needed. Roads like Barton Highway on the other hand should have lightless fully separated intersection at Gundaroo Dr and Gungahlin drive intersections as well as some down south on the Monaro Highway. But suburban main roads nope.

Deepak Ramanath yep intersections with traffic lights are not the answer…..we need to change Governments thinking and reject…..they que and stop traffic…leading to more pollution and longer travel times

Ashley Wright I haven’t driven myself much on the southern cross, but my comments in general reflect the solution that ACT government tend to take. Some of our major roads have been chopped with intersections, like the classic Hindmarsh Dr.

Craig Elliott Yeah, we see this every day and at every intersection. There has to be some long term solution.

Oh great. More unnecessary roadworks to fix a problem caused by people who should have their license taken away.

Remember who has caused this annoyance at next years election. Vote her out.

Glad the feds are in on it..
after what local labor did to erindale, tuggeranong, surwood drive…