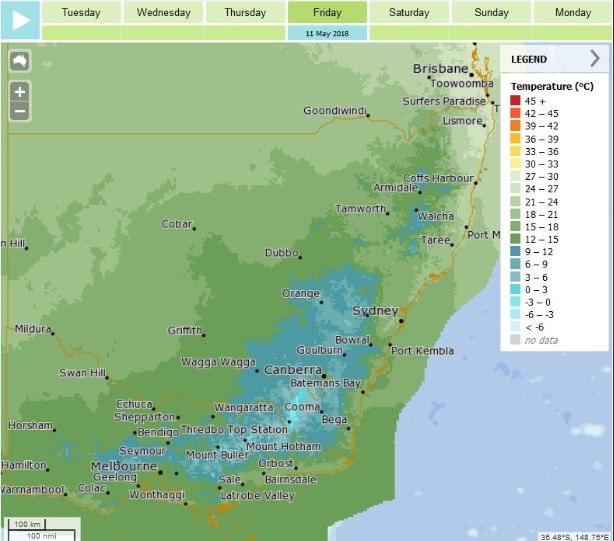 Cold temperatures are expected across the region later this week. Photo: BOM.

There are high hopes that a weather system moving across Australia will deliver welcome rain and a dump of snow to South East NSW – the region’s first significant break from at least five months of dry, warm days.

A strong cold front from the Southern Ocean is moving across from Western Australia now, it’s chill is likely to be felt in South Australia and western parts of the Victorian coast on Wednesday night (9 May).

The first noticeable change in weather for New South Wales will reach the Snowy Mountains on Thursday night (10 May).

What happens after this is very hard to predict and there are several scenarios being considered by forecasters covering South East NSW and the ACT.

The Weather Bureau’s Sean Carson says the system is being pushed hard by a polar westerly airflow.

“Come Thursday, the cold pool of air associated with this system is forecast to shear off or become detached if you like, from the steering winds,” he says.

“Once this happens we refer to the system as a “cut off low”.

“If this cut off low was to then stall off the NSW coast it would then be referred to as an “east coast low”,” Mr Carson says.

“Either way, such systems can bring severe weather impacts including phenomenal seas and swell, heavy flooding rains, damaging and destructive winds and snowfalls to low levels.”

AskBOM: What is a cold front?

A cold front in the Southern Ocean is moving towards southeastern Australia, bringing not only lower temperatures but also wind and rain (see our last post) … but what is a cold front?Watch our short video, then check our blog for more detail: http://ow.ly/PgrR30jSNWr

Posted by Bureau of Meteorology on Tuesday, May 8, 2018

The weather forecaster of over 20 years cautions against taking too much notice of over sensationalised predictions at this stage, but certainly acknowledges the potential that exists within the approaching system.

Mr Carson is confident that there will be snow for the alps from Thursday night.

“Falls up to 50cm are possible through to the weekend if the system does track over the snowfields,” he says.

“Snowfalls down to as low as 500 metres outside of the snowfields are also possible which would include many towns across South East NSW and ACT presuming the system takes that trajectory.

“It’s worth noting however that snowfalls that usually occur in May rarely last to the opening of the ski season, the last time we saw significant snow in May that set up the ski season was back in 2000 when a metre of snow fell.”

When it comes to rain for the region’s parched landscape and veggie gardens, Mr Carson is hopeful. 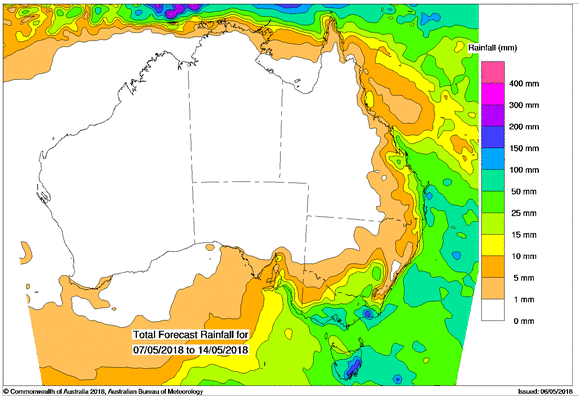 Coastal rainfall is forecast for the week ending May 14. Photo: BOM.

“Rain across southern inland NSW is likely, it is not a big rain bearing system, maybe 10-20mm, [none the less] very welcome after a prolonged dry spell,” he says.

“The reason for this is there is no warm moist air ahead of the change which can often bring widespread rainfall as cold fronts approach.”

Mr Carson believes coastal communities have the greatest chance of receiving heavy rain from this system.

“The South Coast is unlikely to receive any steady rain before the latter part of the weekend, but who knows if an east coast low was to form then heavy flooding rains cannot be ruled out, even though not currently forecast.”

Locals are crossing fingers and toes hoping the influence of rain and snow will win as this system develops in the coming days.

Mr Carson suggests people stay tuned to the Bureau of Meteorology website for updated forecasts and any warnings.

“If you are planning back county travel, bushwalking, or marine activities then its best to postpone at this stage or at the very least watch weather developments very closely,” he says. 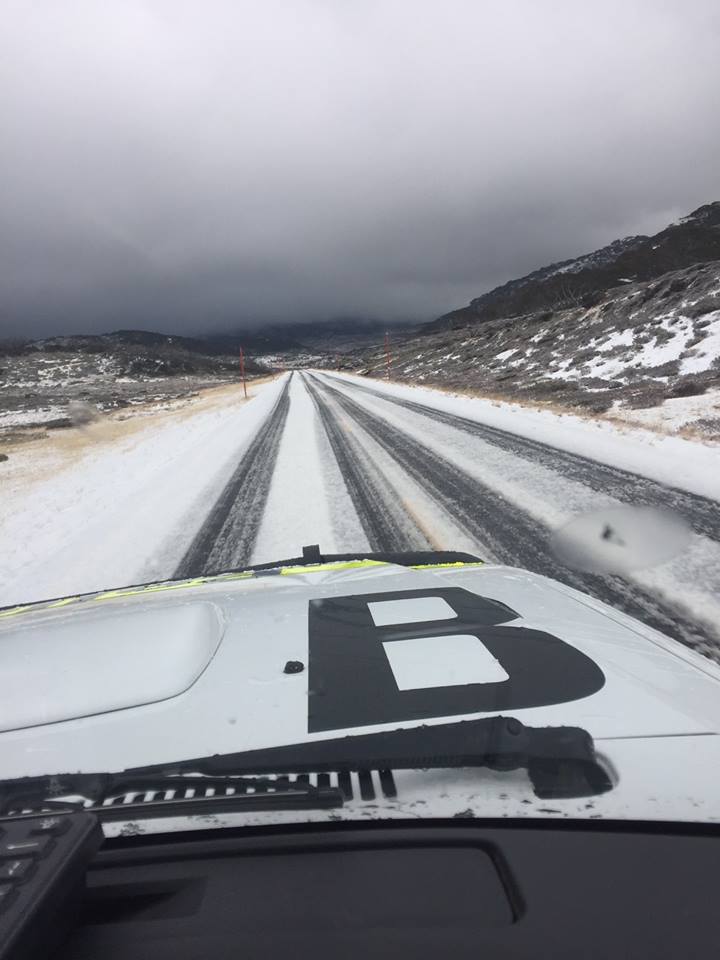 A dusting of snow around Jindabyne on May 4 had police asking motorists to take care and drive to the conditions, more snow is forecast this week. Photo: Monaro Police District Facebook.