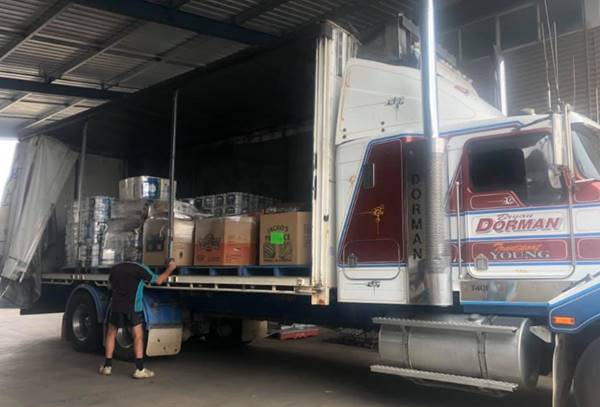 The fires gripping the region have sparked an overwhelming show of support from individuals and businesses in Young, none more so than the town’s local supermarket.

As bushfires gained momentum throughout NSW last week so too did local social media murmurings about assistance. It was Robert Donges and his family, owners of Donges Supa IGA, who were among the first to start taking in donations locally.

“We started the collection first at IGA to help Steph Cooke (NSW Member for Cootamundra) who was down with the Tumut community,” store manager Wendy Silk told About Regional.

“We got a call the next morning from Jane Douch, saying her husband Dr Tom Douch was heading to Moruya to help in the hospital, and could they take a load of donations down in their ute, and it just went gangbusters.”

The Douch’s ute-load of $2000 worth of necessities bound for Moruya Evacuation Centre was the result of a first-day effort. 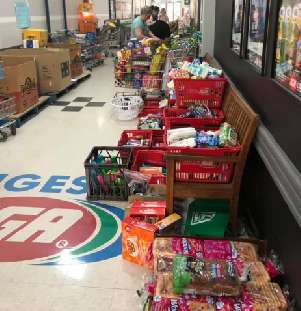 It also provided the momentum that led to a virtual supermarket on wheels – a semi-trailer courtesy of Bryan and Kate Dorman – that departed Young on Sunday bound for the Tumut staging area. This services the fire-ravaged communities of Tumbarumba, Adelong and Batlow.

Wendy estimates Sunday’s load pushed an estimated $8000 worth of goods – mostly food and water – into the southern fire zone. Among them, $5000 in gift cards to help residents get back up on their feet. For every pallet of water that goes out, wholesale distributor Metcash is matching it.

Wendy said on Monday she had around $10,000 in cash and gift cards in front of her. The entranceways of the store are lined with red baskets filled with essentials.

“It’s overwhelming the generosity from this small community,” she said, “items are either being donated, purchased – you know – people just come up to me with cash, wanting to help, some with tears in their eyes.”

An unexpected response has also emerged from surrounding towns– with a truckload of donated goods and care packages arriving in Young from Cowra yesterday with more incoming from Grenfell.

“I think the fact that we are known to the community and there’s trust that the goods will go where they are supposed to go,” Wendy said.

Rachel and Glenn Douglas, also of Young, are set to transport two 20-foot shipping containers of donations to Cobargo Bushfire Relief Centre. One contains linen, air mattresses, animal food, medical supplies and clothing. The other will carry food and water collected from IGA.

Rachel said a conversation between her and fellow locals, Lisa Cooke and Paul Buckland, got the ball rolling – again on social media – and led to a swathe of donations from people young and old.

“There was this one guy, a father, who brought in one of the first loads,” Rachel said, “I know he is a hard worker; he has a young family but it really made me emotional when he came in.”

Logistics now come into play. The two women have been picking up donations throughout town. Some have travelled from Yass, Boorowa and Harden. Food donations are being managed through Donges Supa IGA, while clothes and household items are being managed by Rachel and Lisa.

“I can’t put into words how amazing this is – it has opened my eyes and restored my faith in humanity,” Lisa said. Lisa moved to Young from the South Coast in 2019, so many of her family and friends have lost their homes.

“I’m just keeping in touch with them and finding out what they absolutely need, things like nappies and baby formula. Baby formula is being used to replace milk in coffees so mums with babies can’t even buy that.

“We’re even stocking up the fire trucks with water and Gatorade as they go through,” she said.

The call for donations echoed across the world this morning as Jane Douch took to social media in her bid to encourage more people to step forward with support through the Donges Supa IGA Fire appeal.

“This is real this is now. It will go to those who need it, wherever they are,” she said.

Karen de Gans 👍🏻 no I hadnt seen it so Thankyou 😁😁