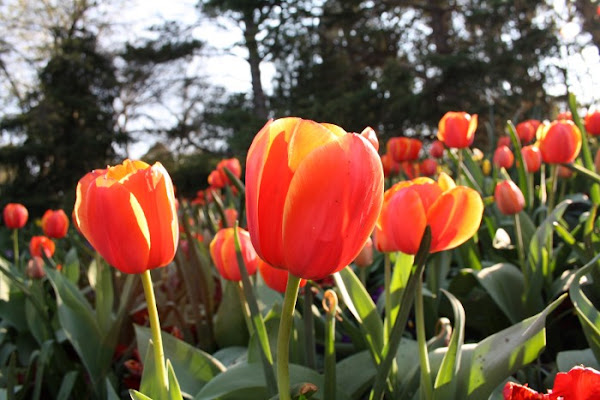 Andrew Barr is palpably thrilled with a booming Floriade and expanding nightfest:

Floriade has again achieved outstanding results in 2013, recording the second highest overall attendance, the biggest NightFest and the greatest economic return to the ACT in the event’s history.

A total of 448,987 visitors attended the capital’s 30-day spring festival, making it the second biggest crowd since the introduction of turnstiles in 1999 and representing an increase of 1.5 per cent on last year’s attendance figure of 442,243.

Over five nights, Floriade NightFest’s spectacular lighting installations, world-renowned comedians and enchanting night markets attracted 33,612 people – the highest attendance since its inception and up a massive58 per cent from last year.

Floriade also attracted 105,356 interstate or international visitors who came to Canberra specifically for the event, resulting in an increase in direct expenditure of $39.9 million – an increase of 30.8 per cent on last years’ result of $27.6 million.

Floriade 2013’s increase in Gross Territory Product was $58.5 million, which is the highest on record and an increase of 30.9 per cent on last years’ $40.4 million.

Bravo Floriade – always my favourite time of year (almost makes the spring magpie attacks more bearable…almost…). This was the first year I missed since 2006 due to moving interstate! It looked great though 🙂

Geoffrey Bell - 4 minutes ago
Julie Mylchreest The tenant union be out of a job If they did anything to improve the renter lot. View
Eric Anthony Lucas - 47 minutes ago
Why would anyone want to be a landlord? If you think it is hard to find rental accomodation now, proposals like this will onl... View
Zach Byrnes - 51 minutes ago
Nicholas Nagel thoughts? 🤔... View
Community 11

Perry Alopex - 2 hours ago
Nice! I can only imagine that trying to settle in Canberra would be pretty rough. It's got one of the highest costs for livin... View
Peter Manna - 2 hours ago
They will think this is paradise lol View
Amie Doolan - 2 hours ago
Where have these 50 people been housed? Are there local families taking them in, are they living in hotels or have they been... View
News 48

Aaron Nicoli - 3 hours ago
It’s also so much safer now… 60km/h jam brakes on for the camera, accelerate back out to 60… It’s achieved nothing fo... View
Phil Hogan - 4 hours ago
Got to pay for the tram 🙄 View
News 3

Floriade may continue to blossom in the burbs, says Barr

@The_RiotACT @The_RiotACT
Despite having it's #funding withdrawn in June 2021 and subsequently closing down, ACT Recovery College has received a prestigious Australasian #award among unwavering #community support https://t.co/Ptc8c8L0GE (26 minutes ago)

@The_RiotACT @The_RiotACT
ACT Health has reported 17 new cases of COVID-19. There are 17 people in hospital with COVID, including nine in intensive care https://t.co/1Bc2I9mRsp (34 minutes ago)