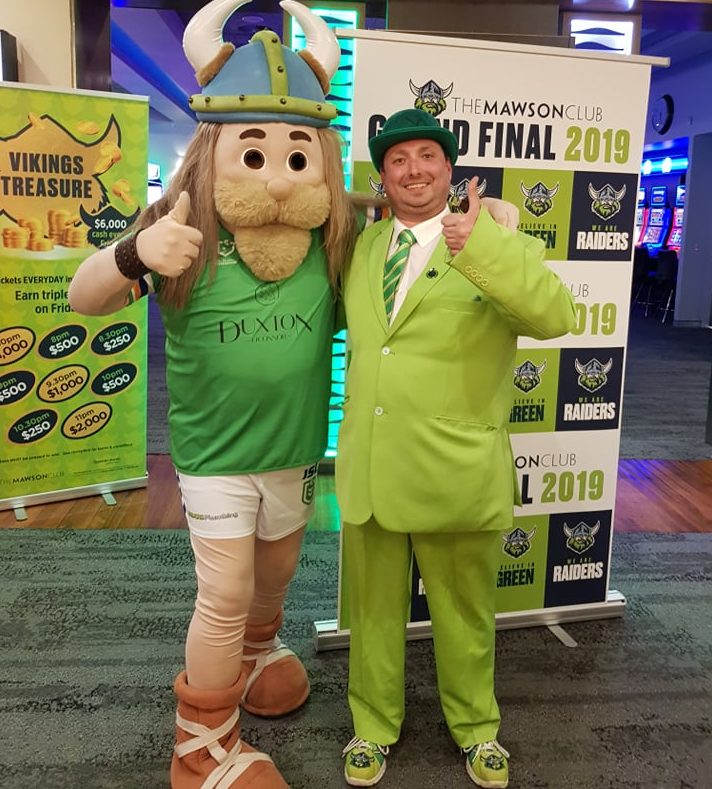 He’s a man who has gone above and beyond for the Canberra Raiders time and time again, and 2022 will be no different for ‘The Lime Green Suit Guy’ Christopher Veilands, who is set to donate his beloved green suit to help celebrate 40 years of the NRL club.

The Canberra Museum + Gallery will hold a special exhibition, ‘Canberra Raiders: 40 years in the Limelight’, in early 2022. The showcase will celebrate the Canberra rugby league club’s history on the field, as well as the significant community contribution made by the Raiders during the past 40 years.

Some people may know Christopher from seeing him donning his lime green suit at Raiders games, as well as from his victorious appearance on Hard Quiz with Tom Gleeson on the ABC.

The idea for the suit was birthed more than a decade ago when Christopher was walking through a Canberra shopping centre with friends and he passed a shop selling a lime green suit.

“Someone said, ‘You should get one of those suits,’ and I said, ‘OK,’ and it has gone from there,” says Christopher.

There have been a number of different iterations of the green suit since that day.

“You go in and out of your size – some good times and some bad times – and you’ve just got to adapt to it,” says Christopher.

While there was a level of notoriety attached to being ‘The Lime Green Suit Guy’ prior to his appearance on Hard Quiz, that changed quite dramatically after the episode aired in July 2020, when he won with the Canberra Raiders as his specialty topic.

“It used to happen a little bit before Hard Quiz where people would come up and say, ‘Can we get a photo?’ says Christopher. “But now everyone knows me as the guy with the green suit from Hard Quiz so I do get stopped a lot.

“I’ll be walking to the ground and you can hear little kids going, ‘I wonder which team he supports.’ It’s just little things like that. People come up and want photos with you, and it’s a really good conversation starter with people when you go to away games, as well.”

The exhibition at Canberra Museum + Gallery will display Christopher’s beloved green suit, as well as the Hard Quiz mug he received upon winning the episode.

The exhibition will also feature plenty of old-school Raiders merchandise and iconic photos.

For Christopher, it means he’ll start the Raiders season without his beloved suit.

“From the time I don’t have it, during the time of the exhibition, I’m just going to turn up as a normal spectator which should be an interesting experience if people are expecting me in the suit,” he says.

Despite the Raiders’ underwhelming 2021 season, their superfan is optimistic about what season 2022 may hold for the men in green.

“I think our major problem last year was our halfback,” says Christopher. “Between the three of them – George Williams, Sam Williams and Matt Frawley – we never really had any stability, and each player had their own strengths and weaknesses.

“I’m really excited to see what [Jamal] Fogarty brings. He’s learning from one of the best halfbacks to play the game in Ricky [Stuart, coach].

“I’m excited for the year. We’ve got more depth in our forward pack and hopefully we can get through the season without too many injuries and we can make the grand final again.”

Kathy Pearman - 4 minutes ago
I would say that depends on the variety, some may be, but some defiantly not. View
Andrew Early - 41 minutes ago
Elaine Staples no Elaine…. Worst tree EVER. View
Lucy Doan - 44 minutes ago
Funny thing is that the planners never plant in their areas such as inner south or inner North, they plant these trees in poo... View
Lifestyle 8

Nada Krstin - 17 minutes ago
Corey Karl I doubt people have stopped reporting crimes/burglaries, even if now necessary to do online as you still need this... View
Food & Wine 9

Vicky Myors - 42 minutes ago
So cute how you had chickens in the back if your ute View
Vicky Myors - 46 minutes ago
Paul I watched your show tonight for the first time .Very impressed you do a fab cook up . keep up the good work.I will be wa... View
News 45

Diane Tait - 51 minutes ago
Sue Danaher we have had this system for 7 years since we moved to Lake Macquarie. At this time of year we could do with two g... View
kenbehrens - 1 hour ago
Those government claims also assigned a dollar value to the 30% food waste. When I calculated back the "average" weekly food... View
TimboinOz - 4 hours ago
We have two large grey-black recycled-plastic worm farms. Much less work than composting, no turning, effectively zero smells... View
Sport 2

Hillbilly - 55 minutes ago
Both firmly in the pantheon of the greats and both made huge contributions to Canberra. Best wishes to them. View
Community 94

Mick Brennan - 58 minutes ago
Kris Peralta diff events View
Katarina Vucic - 59 minutes ago
Just let people who enjoy to have it simple stop making world too safe let some steam out View
Scott Norman - 1 hour ago
Toni Isaacson who is us? View
Lifestyle 7