In uncertain times,
we give you certainty.
29 November 2021 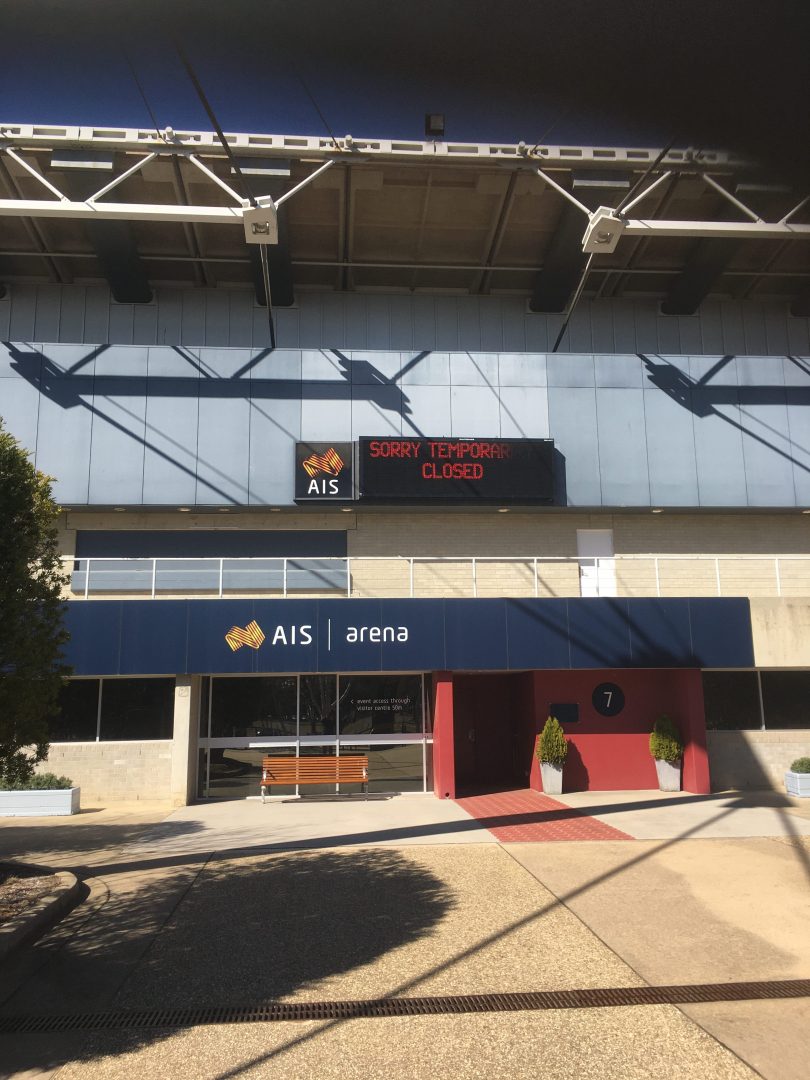 AIS Arena isn’t an option as a venue for major sports events as it is currently closed. Photo: Tim Gavel.

Several years ago, I was in a meeting with representatives of a sports peak body. They were canvassing their desire to stage an international event in Canberra.

They extolled the reasons why Canberra was so important to their desired end. Vital to their argument was if the sport was going to be seen as truly national, the city’s virtues of being the capital and a growth area were significant.

The conversation went on for a while before the subject turned to money. The sports organisation would, of course, require a substantial amount of money from the ACT Government to attract the event to Canberra.

So after establishing the ACT’s importance to the future of their sport, it was clear they were reliant on the ACT Government stumping up a substantial fee to host the event. However, it was portrayed differently by the representatives of the sports organisation involved at the time.

As it turned out, the ACT Government’s offer was less than what the sport was seeking and the event took place elsewhere, no doubt with the same emphasis on strategic importance but with a financial caveat.

And so to the present day, and the same financial demands are being placed on the ACT Government to stage major events in Canberra by a number of sports organisations.

The government opted against bidding to be a host city for the 2023 FIFA Women’s World Cup, so the matches will instead be played in Adelaide, Perth, Brisbane, Sydney and Melbourne, but not Canberra.

The ACT Government also opted against bidding for the men’s T20 Cricket World Cup in 2022, which will be hosted in all major capital cities as well as Geelong and Hobart, but not Canberra.

However, Canberra will host a women’s Ashes Cricket Test at Manuka from 27 January next year and a men’s T20 International against New Zealand in February 2022.

READ ALSO When women were women, men were men – but only one could drive the tractor

Currently being publicly played out is whether the ACT Government has a desire to bid to be a host city for the 2027 Rugby Union World Cup with the granting of preferred bid status to Australia.

Given Australian Rugby’s financial position and the quest to make as much money as possible out of the tournament, it could mean that Canberra, home to Australia’s most successful Super Rugby franchise, misses out if the ACT Government isn’t willing to pay for the privilege.

The expectations are high that governments and stadiums around Australia will pay handsomely to be one of the 10 venues to host the Cup.

Of greater concern, I would have thought for the ACT, is that there are no venues to host major sports events.

Manuka Oval, with a 15,000-seat capacity, along with the ACT Hockey Centre, are the only two venues capable of staging events at the moment.

The ACT needs to get venues sorted before even beginning to bid for major sport.

How about they open the purse strings and support grassroots sports here in the capital first! Basketball is screaming for support and getting nothing in return.

And Tim is absolutely correct

Instead of bidding on more sports, how about investing in our arts sector? Support so many of our citizens who did it extra tough during lockdowns etc because the industry wasn’t supported by federal funding, plus make it somewhere major acts want to come and play so we get $ back into the community.

No. Higher priorities like affordable housing need to be addressed before such as this.

I’m open to a pyramid league.

Yes. We need the AIS precinct better utilised. Open it up more to the public get more people using it. It’s a great facility not worthy of being a ghost town

I actually like what the Tasmanian Government just did. They partnered up with Hockey and bought a rolling bunch of events to be hosted there over the next five years. Hockey might not bring in huge numbers of spectators (comparison to a Rugby WC game for example) but the bang for buck in getting national juniors or masters tournaments every year, on a minimal outlay, is far better. Large numbers of players/families who come, stay, play, spend and put money into the local economy.

“The sports organisation would, of course, require a substantial amount of money from the ACT Government to attract the event to Canberra.”

The use of the phrase “sports organisation” disguises the fact that it’s just another rent-seeking business so my answer is, no.

On what basis is Canberra Stadium not capable of staging events? Yes its far from an ideal stadium, but that doesn’t mean it can’t host big events – has in the past and will in the future.

The key factor here is cost. Sadly hosting of sporting events has become just another way for states to compete against each other, individual sporting codes to effectively extract significant indirect subsidies from governments, and in the end the taxpayer being the ones that have to pay up for the privilege (rightly or wrongly – I don’t have a strong view on that point).

There needs to be found a better way.

Half the time “major” sporting events have places with beautiful, state of the art stadiums with about 50 people in the crowd for the majority if the tournament. It’s not worth the investment unless it’s useful for a local national team too.

ACT Government could not attract a cold

For a capital city out entertainment facility’s are Appalling

The cost of bidding is prohibitive too.
A more targeted plan with what events we want long term + either tailored or multi-purpose venues would be a good start.
Drawing major events also helps city liveability – if we are not going to invest in major events invest in cheaper flights to Sydney and Melbourne to go to more events outside of canberra.

Garvin Francis ha ha can we start with something more simple; like a coordinated state-level response to COVID management?

Garvin And make sure caterers for these events can handle them