For the price of a stop, the wall was lost 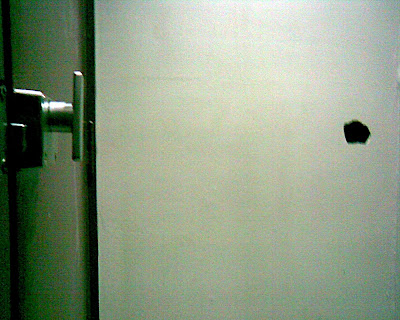 As taken in the men’s bog of Edgar’s in Ainslie tonight.

God gave us rubber door stops for a reason.

(yes the black blob is a hole)

Anyway, even when taking a dump I’m still on the job.

30 Responses to For the price of a stop, the wall was lost
Filter
Showing only Website comments

“This one time, I had to cross the road.”

“This one time, I saw a white van with orange lights.”

“This one time, I saw police in Civic.”

Now I can add:

Ant – last time at Edgars I thought it was over priced for both food and drinks, and the service was a bit hit & miss. I reckon Debarcle is a better bet – and they have Zierholz too!

You don’t take a dump

exactly, toad! or ‘take a p!ss’… another of those americanisms that really grates me. like ‘off of’.

shouldn’t JB report said hole in lavatory wall to edgar’s management? or did he…?

There are competitors to RA???

We won’t be discussing our business plans here, simply because our competitors read the site.

Suffice to say we believe we have sufficient capital to make this work and that enough advertisers will want to access our audience to make it work into the long term.

I’m curious as to why you’ve returned – you cited a bit of a financial crisis brought on by a lack of advertising income from the site when you left, and that doesn’t appear to have changed much, judging from the ad content since then.

When I first tuned a few years ago in the aim of RiotACT was to be a good souce of news, views and opinion from the ACT and surrounds – a credible alternative to the mainstream media with a bit of spark and personality too, and you were hoping to build both RiotACT and the broader Concatenate into a couple of financially self supporting concerns. It didn’t work (or perhaps just didn’t work fast enough) with the existing story/subject recipe. While readership has apparently risen rapidly, advertisers just don’t seem willing to follow.

Is this post about the back of a toilet door indicative of the subject and language level you’ll be taking in the future? Are you really hoping to spin this sort of stuff into an income?

Please don’t get me wrong – I’m nothing more than an occasional commenter, although I drop by generally every day. I’ve never contributed a story. I’ve tried advertising, but for me it didn’t pan out (that’s as much my problem as yours). In short, I have absolutely no credibility at all to be commenting on the site direction. And I know that this is YOUR site and you’re totally free to do what you want with it. But it seems pretty obvious that with stories like this as FPPs RiotACT is always going to be little more than a labour of love, not the immediate response to “where can I get REAL news about what’s happeing in Canberra” for either readers or advertisers.

Where are you going with RiotACT?

what i miss is the interesting anecdotal graffiti on the back of toilet doors, the hole would have attracted some amusing comments which would have been worth reading whilst waiting for nature to take its course….

Anyway, even when taking a dump I’m still on the job.

The true test of Johnboy’s commitment is if he’s still on the job while he’s on the job.

Look forward to DaNmAn’s photographic toilet tour of Canberra – in response to this and other toilet related threads – and ill chuck in some Indian toilets for reference material.

Did you know that the left hand toilet in haig park has a polished wood grain seat…. Sure does, go on I dare ya to have a look…watch out for the fits and blood though.

If you mentally remove the ‘s or the has, I don’t sound quite so strange…
*blames the lack of sleep*

So johnboy’s has replaced the “Best X in Canberra?” meme with meditations on the back of toilet doors.

JB, I guess that *almost* makes you a Twitter Sh!tter:

Except you did just respond, Pandy. So, which levels do you feel ‘wrong’ on? Where did I put those ink blots…

By the by, is this a ‘hard hitting’ issue, or didn’t it take much force to knock that hole in the wall?

I am not going to dignify this thread with a response, since to do so would be soo wrong on soo many levels.

You don’t take a dump

erm, most who posted before this?

Ah ha, Edgars. We have been wondering about making this the new site of the Cheap Family Feed as the woden southern cross club has jumped the shark (finally). I peered in through the window while waiting for chips from Theo’s (chook already got from IGA), and it looked rather nice. Is the food good? Is the beer extortionate? Downloaded menu and it looked very promising.

Stefan Stirzaker - 2 hours ago
Good to see the white-anting after the fact in a bid to reduce the amazingly good job done by the upper leadership and member... View
HiddenDragon - 3 hours ago
The politics and the personalities are ultimately secondary issues - with increasingly nasty summers on the way, we need to d... View
Tina Newsome - 3 hours ago
I think they all did a bloody amazing job out there! View
News 15

Tiffany Roy - 2 hours ago
Canberra hospital's mental health ward is awful. View
Gary Hatcliffe - 2 hours ago
Wow! 8 beds. Aren't we lucky.... View
Jarrod Male - 3 hours ago
Bianca Rossetti ....let's hope. My understanding was that it has been on the table for over 10 years now. The legislation aro... View
Business 3