Former AFP detective, Hilltops Councillor and farmer rolls her sleeves up for Goulburn 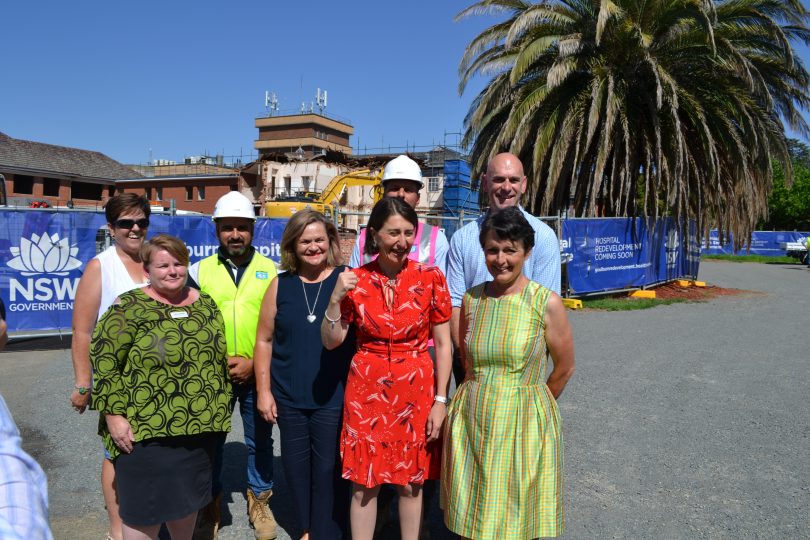 The newly-minted Liberal Party candidate for Goulburn, Wendy Tuckerman, joined the NSW Premier Gladys Berejiklian on a promised spending spree through the electorate this week – in the epicentre of the seat an extra $30 million for the Goulburn Base Hospital redevelopment, while to the north in the Southern Highlands, upgrades and accessibility for the Moss Vale train station.

Later that afternoon, Ms Tuckerman made time for an interview with Region Media, outlining a grassroots campaign following the surprise retirement announcement of current Liberal Party MP Pru Goward, that has just over two months to gain traction before the NSW election on 23 March 2019.

However, Ms Tuckerman is not new to the electorate nor is she a stranger to tough assignments. She’s lived in the southern end of the seat in Boorowa for 21 years, was the former chair of the Canberra Region Joint Organisation (CBRJO) and former member of Regional Development Australia Southern Inland, and a previous administrator and current councillor on Hilltops Council.

Last year she stood for National Party preselection for Cootamundra and was beaten by current Nationals’ Member Steph Cooke but has since let her financial membership lapse. Around a month ago, she joined the Liberal Party.

“I didn’t renew my National Party membership because I’m a councillor and felt I didn’t need a political party. My mantra is that I serve the people. I had no further [political] ambition until the surprise announcement from Pru, and I received calls urging me to stand. I seriously considered it and, in the end, thought I’d give it a try,” Ms Tuckerman said.

Aside from her community, development and civic experience, Ms Tuckerman knows about the law. She spent 14 and a half years in the Australian Federal Police (AFP) on the toughest beats going.

“I was a detective specialising in child abuse and sexual assault. I was also a member of the drug squad,” she said.

However, as a mother of two boys, with her husband also in the AFP, the decision was made to buy a farm near Boorowa. After immersing herself in community life, it wasn’t long before she was asked to stand for council.

“That was in 2004 and I’ve loved every minute of it. I’ve put a lot into the community and I’m very proud of the work that has been done.”

Ms Tuckerman sees the major issues for the Goulburn electorate as health services, education and transport.

“In Goulburn, voters are concerned about health services and education infrastructure. We’ve made an announcement about the Goulburn Hospital today. We’ve never seen the amount of funding to be spent in this region and it’s very welcome. Voters need a good MP to make sure we see that funding,” she said.

“In the Southern Highlands, transport is the main focus, and the age of the rolling stock is already being addressed by the NSW Government.”

She will hit the ground running with her campaign, knocking on doors and listening to voters’ concerns and the issues they want to see actioned. She’ll also be working with local Coalition members across the electorate, including in Goulburn.

“I have met a lot of local Liberal Party members [during her visit to Goulburn this week] and they have been very welcoming and supportive. Unfortunately, the circumstances haven’t allowed for a preselection process.”

Equally, she looks forward to working with National Party colleagues across the electorate.

As for the threat of former Goulburn Mayor Geoff Kettle running as an Independent or possibly representing One Nation, Ms Tuckerman is unperturbed.

“I know Geoff and have worked with him in the past. It’s the million-dollar question as to who voters might support but I will work hard to show voters that I’m the best person for the job,” Ms Tuckerman said.

She has committed to leaving the electorate office in Goulburn, though her primary residence will be at her farm in Boorowa.

“I’ll be coming and going from the electorate office and will require accommodation in Goulburn.”

Ms Tuckerman joins a strong field of candidates for Goulburn including Labor candidate Dr Ursula Stephens who drastically reduced the Coalition’s margin in the seat in the 2015 NSW election by 20 per cent, taking the Liberal Party sitting MP Pru Goward’s lead to 6.6 per cent.

While in Goulburn this week, Ms Tuckerman, local MP Ms Goward and the Premier announced the additional $30 million for the Goulburn Base Hospital will add new outpatient and allied health clinics, renal and chemotherapy facilities to the redevelopment.

The Liberals have totally lost the plot in rejecting Kettle. They will lose this seat.

Also, on the Federal scene, Liberal Minister Kelly O’Dwyer is resigning at the end of her current term.

Next year, Australia will be “wall to wall” Labor.