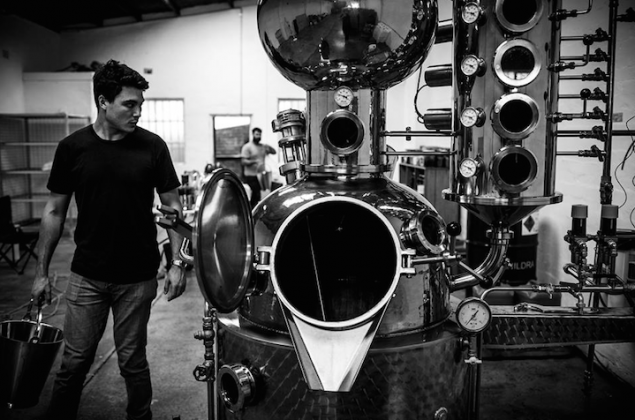 Two former Canberrans with a love for gin have made their dream of opening a small distillery in Sydney a reality.

Like many young Canberrans, Griffin Blumer and Jesse Kennedy moved to Sydney’s Inner West in their early twenties. They are now opening a small gin distillery, Poor Toms, in Marrickville, and hope to release their first batch of Sydney Dry Gin in May.

When they started this project at the beginning of 2014 there were no other distilleries in Sydney, but in the past month they have witnessed the release of two independent Sydney gin labels.

“We really respect what those other guys are doing, I think it’s great that there is a burgeoning local spirits industry, we’re just excited to be a part of that wave.”

However, they think they have developed a product that is unique among gins. The young distillers have installed a 200L German copper pot still (named Jane in honour of their Year 7 English teacher) and their scale is much smaller than other independent Australian gin makers.

“We think our gin will really stand out as something different. Because of the beautiful German still and the care we take with selecting ingredients.”

“We didn’t want to make another London Dry Gin because the big guys already do a pretty decent job of that. We thought, because we’re at this small scale, we can do something a bit irreverent and not worry what the traditionalists think. But, of course you have to get the balance right, a good gin is still a good gin.”

I can drink to that!

They wear their outsider status in Sydney with pride.

“Some people still groan when you say you’re from Canberra, but I’ll always defend it. Really exciting stuff is happening there, it has a world class bar scene for one.”

Their Canberra connections have been vital to their progress so far.

“So many Canberra people we know here in Sydney have put their hands up to help get this venture going, there is a really generous and supportive Canberra expat community here, they are definitely taking over the Inner West.”

Several young Canberra expats are involved in the project. Amy Donaldson, who met Griffin when they both attended Narrabundah College, is doing the design work for Poor Toms. Photographer Dom Lorrimer has been documenting the process. Dom and fellow Narrabundah College alumnus, Ollie Williams, are helping Poor Toms produce a video to launch the first batch of gin in May.

Although they are still waiting for some licensing paperwork to be cleared, they are aiming to release their batch on Pozible, a crowd funding website, very soon. For further details, find Poor Toms on Facebook.

I’m building a stock of olive juice in quiet anticipation …

Cheryl Thuillier - 35 minutes ago
Was a great place. View
Opinion 128

Tom Dale - 4 hours ago
As the APS "permanent staffing" model is still essentially based on the Northcote-Trevelyan Report of 1854 which re-organised... View
Vladimir Svoboda - 4 hours ago
CPSU has been advocating for greater homogenisation across pay bands for a decade and it was Labor policy at the last electio... View
Laurel Haskell - 4 hours ago
People leave the PS and start up their own industry because they KNOW the System..Consultants, Employment Industries, Care In... View
News 150

Raymond Evans - 4 hours ago
Canberra was so much better off when we were part of the federal government , since our local government started everything h... View
Anthony Fernance - 4 hours ago
If it’s only 2 weeks behind then they need to improve the mowing schedule a lot because grass don’t grow 4ft high in 2 we... View
Garry Dodds - 5 hours ago
When the Federal Government were in charge before self Government the lawns were great now it's touch and go..Only in the Sub... View
News 6

@the_riotact @The_RiotACT
In the last week alone, @genesisowusu took home 4 ARIA and two Triple J awards. We sit down with the #Canberra artist behind Owusu's most iconic piece of gold jewellery - his gold grill https://t.co/r576TmanM0 (23 minutes ago)