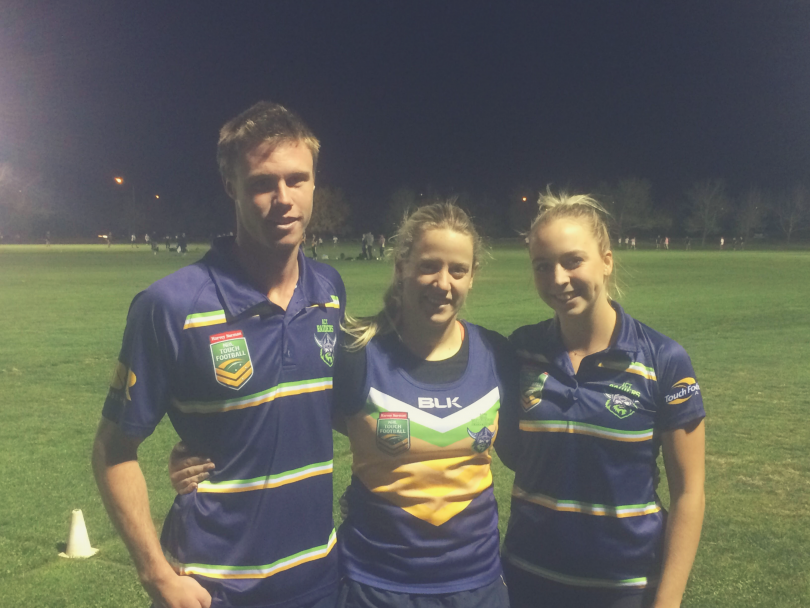 Four Canberra touch football players have been selected for the NRL’s Elite Touch Football Premiership with matches to be played as curtain-raisers to NRL matches starting next weekend.

Robbie McCarthy, Elise Wilson, Sophie Broadhead, and Bec Beath have been picked to represent NSW’s teams Newcastle Knights and Paramatta Eels, as the NRL and Touch Football Australia aim to grow the competition into a professional series in the coming years.

Newcastle, Parramatta, Wests Tigers, North Queensland, Brisbane and Gold Coast will be the six teams in the NRL’s Elite Touch Football Premiership with matches to be broadcasted and played as double-headers.

Parramatta Eels representative Bec Beath is excited that elite touch football players would finally get the credit they deserve.

“We have all been playing for a while and we all know that in the highest level, touch football is worth watching because it is quite enjoyable and quite entertaining,” Beath said.

“It’s good that we get the chance to show other people who don’t normally watch touch how skillful the sport actually is.

“We rarely get outsiders watching the games because they don’t know it’s on, so it is good to finally get that recognition and be able to say ‘hey, look at what we can do’.”

Beath said she knew of girls that deferred away from touch to play Rugby 7s when it became an Olympic sport since there was no elite level touch football to aspire to.

Beath hopes that will now change with the new elite competition starting next week.

“Down the track, hopefully touch will be an elite sport rather than the perception of park touch football and it being just a social sport,” she said.

“I think it will be good for people to see what elite level touch looks like.”

Elise Wilson said it will good for local touch players to see the level of skill in elite touch football and to give kids something to aspire to.

“I think it is good for the younger kids growing up because if they don’t get to go to Elite 8 where the best touch is on display, then they only see what is around at their local competition,” Wilson said.

“Touch football being on television gives them something to aspire and dream towards.”

Robbie McCarthy was 12-years-old when he started playing touch footy when all his league mates started to play to improve their skills.

Touch football soon became his sport of choice and he has not looked back since.

“You can see from my build that I am not made for league, so touch was the next best thing for me,” he said.

“Now with this competition coming in, I get to have the best of both worlds. If you miss out on one, you can always go to the other.”

McCarthy said he was looking forward to coming seasons when more teams will join the competition and will feel more like a competition instead of an exhibition.

“Next year, the competition will be unreal to be a part of, and this year will be a good taste for us,” he said.

“There is pressure to play well to keep your spot on the side because I have six or seven young kids from country NSW who are knocking on my spot.”

The first game, 18th May, will be an Eels home game at ANZ Stadium in Sydney (the touch Eels vs touch Tigers) and the second game will be played that same weekend – 19th May, a Cowboys home game at 1300Smiles Stadium, Townsville (touch Cowboys v touch Titans).