Friend in need has lots of friends indeed 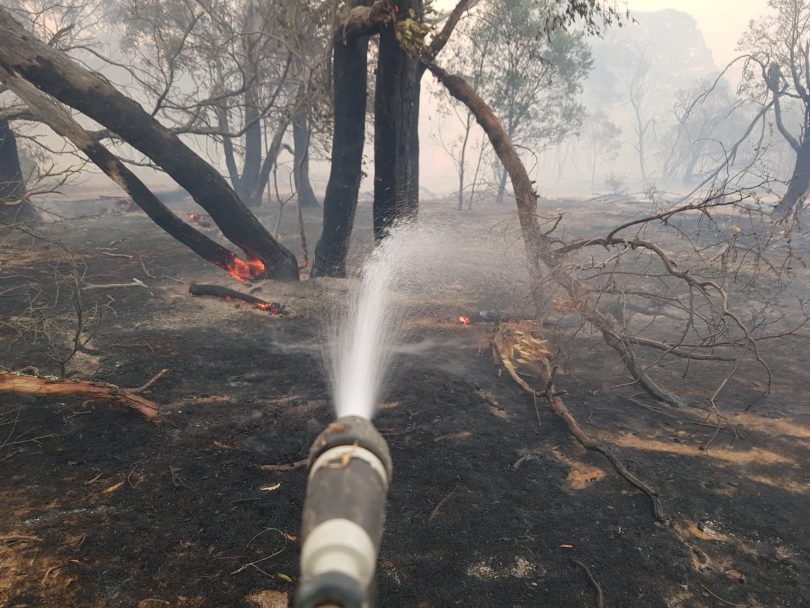 Among rural landholders at Warri between Braidwood and Bungendore at the height of the North Black Range fire last year, Karen Anderson was well prepared with a plan. As flames and smoke approached her 200-acre block where she has lived for 10 years in a two-storey purpose-built shed, she swung into action.

Not only were her home, 22 head of cattle and three horses saved, she was able to help others, too. She is left with an abiding appreciation of other people, especially her workmates.

An IT specialist and senior manager for Canberra professional services firm Synergy Group, Karen says her employer looked after her mentally and physically, right down to the new boots they bought her after the soles of her old ones melted.

“Now they are my new favourite work boots,” she says. “The fire is an unwanted gift that keeps giving.”

When Karen Anderson’s rural home was threatened by the bushfires in December last year, she was left with an abiding appreciation of others, especially her workmates. A senior IT specialist with Canberra professional services firm Synergy, Karen shares the story of how her employers looked after her mentally and physically with Genevieve Jacobs.

Karen has found Synergy’s support is embedded in its culture.

“People care about each other and believe if you work together you can achieve a better outcome than if you try and out-do each other,” she says.

The NSW Fires Near Me app first alerted her to the approaching danger on 26 November. Valuable papers were already stowed in her fire safe, and 75 per cent of her bush block had been cleared, but thickly wooded scrub and Tallaganda National Park encroached on places near her boundary. Well-equipped units such as Karen’s LandCruiser station wagon hauling a water tank and pump, dubbed mosquitoes, could get into places where bigger tankers couldn’t and were invaluable in battling the blaze. 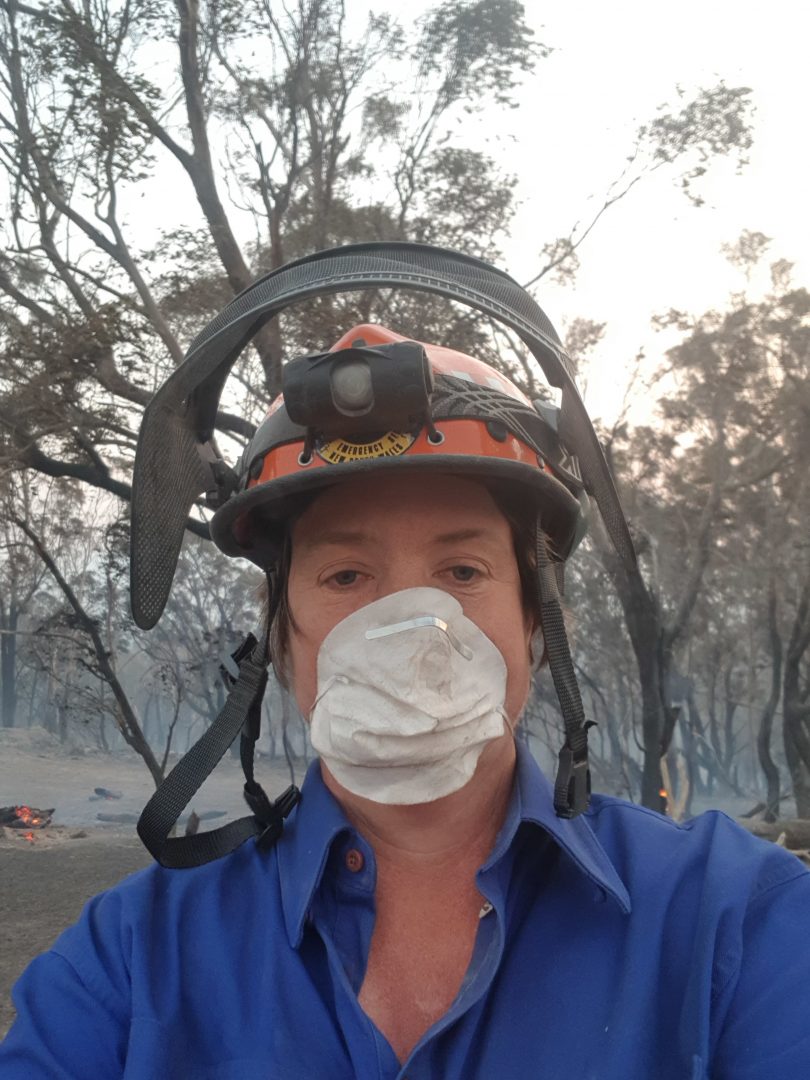 Experience in emergency work prepared Karen for what came.

Long experienced in emergency work, Karen maintained her vigilance checking websites, social media and neighbours’ properties. Working quickly to ward off outbreaks, she helped other neighbours extinguish outbreaks on absent landholder’s property. The fire was relentless and reached her doorstep on 10 December.

At about 3:00 pm when the wind increased and relative humidity dropped, Karen extinguished grass and spot fires with her arm extended from her vehicle with a hose, until her unit was dry.

“I had a fire pump set up out the back, started it, sprayed the fire and the shed. Then the hose popped off the pump connector,” she says. She continued with the garden hose. When the Rural Fire Service arrived, they saw she had everything under control and moved on to a neighbour’s place in the fire’s path.

Later Karen joined them, experiencing a roller-coaster of emotions.

“I could hear gas bottles and car bits exploding on the neighbour’s property, but every home on Watson’s Road survived. I thought my stock would be impacted, because that’s where the fire was headed. But another mosquito unit arrived in time to save them.”

Later that night an emergency services ambulance officer reassured her the relative humidity had risen and the temperature had dropped, easing the fire threat. He suggested she catch up on much-needed sleep.

“I had been watching the embers. They were going out before they reached the house, but I needed someone to give me that independent approval to stop,” she says. “I stopped, I had a snooze.”

Days later she helped a friend defend their property at Major’s Creek. Synergy chief executive officer Galia Cornish had contacted her, offering two weeks’ paid leave so she could continue to help her friend.

Another Synergy partner Pat Quade and executive officer Sharon Poole checked on her to provide support, organise a truck load of hay, fencing material and a working bee to build more than 3 km of fencing. Paid leave for other staff to help was organised.

Sharon Poole’s husband, Jarrod, owns the landscaping business Landculture, so staff pitched in, drilling holes for strainer posts. A few local friends, NSW State Emergency mates from Sydney’s inner west, Sailors with disABILITIES founder David Pescud and his wife Debbie drove for two hours to help. Without this help it would have taken her years to recover.

Karen says Australia’s famed Aussie Spirit and mateship shone through during her ordeal. She bought slabs of beer for the dozer driver, Telstra technician and fire responders to express her gratitude for their support.

ChrisinTurner - 23 minutes ago
But we have $billions to replace buses to Woden with slower trams. View
Public Sector 171

Gavin Bradley - 1 hour ago
Mary-Ellen Bradley not us this is only ACT gov View
Kerry Apted - 6 hours ago
excellent! View
Samantha Freeman - 8 hours ago
Tell that to the Federal Govt. No one has moved to a hybrid model, only state Govt View
Opinion 16

Sofia Zivkovic - 1 hour ago
No point, comp is getting worse each year. View
Tim Mitchell - 9 hours ago
The joint A-Leagues men and women trophy really strengthens Canberra's bid. Would be strange having Canberra as the only team... View
Community 142

Ota Save - 3 hours ago
Sue Sutton No worries Sue. Happy to help ❤️ View
Sue Sutton - 4 hours ago
My Mum has wonderful neighbours who have been helping keep her lawn in check. Thank you Ota and family xx... View
Bill Gemmell - 5 hours ago
Barbara Eglitis I was wondering how long it would take. Seriously, I had the Fowles St Park project in Weston in mind. Sugges... View
News 33

kenbehrens - 4 hours ago
A few years ago when we were visiting our son in Sydney, there were blankets and items of clothing under shelter on the stree... View
jwinston - 5 hours ago
harcm said “tim_c – what a load of rubbish you talk. What if your schooling was completely disrupted by domestic violence... View
Acton - 5 hours ago
The money you are giving out of misplaced guilt to a street beggar is just funding their drug, smokes and/or booze addiction.... View
News 1

Linda Stapleton - 11 hours ago
I may no longer be a young woman but can I just say I have yet to meet one woman who has NOT been sexually harrassed or assua... View
show more show less
*Results are based on activity within last 7 days

Injured horses and destroyed huts – how Kosciuszko fared the fires

Now is not the time to be a Quiet Australian, says Broulee GP

“No help came”: In the path of the fire front near Bredbo

@the_riotact @The_RiotACT
Summer has arrived in #Canberra, which means this week's Ken Behrens #Quiz is all about cricket, ice-cream and music, plus a few other tidbits such as current affairs, ACT trivia and Miley Cyrus https://t.co/toISNbH9dm (53 minutes ago)