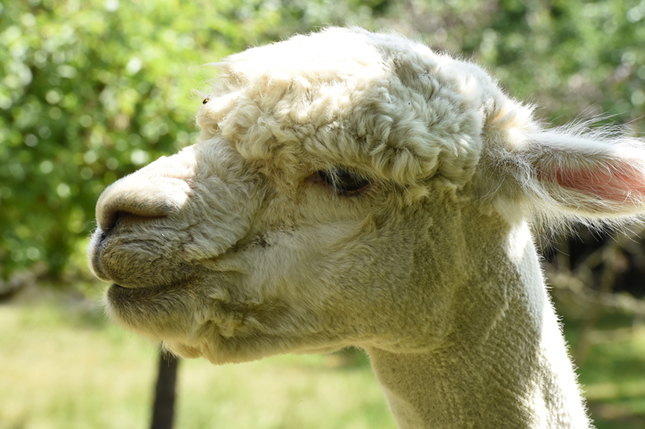 The idea of woolly alpacas being sent in to sniff out drugs has hit the funny bone of many Canberrans who have clicked on to a lighter side of policing.

More than 233,000 people have already viewed a funny ACT Policing video uploaded to Facebook for April Fools’ Day, with around 700,000 people engaging with the post to date.

The video stars six unruly white alpacas and a deadpan presenter who seeks to convince us that her rigorously trained charges will provide good backup for when “all our canines are deployed”.

Spruiking the benefits of the Alpaca Drug Detection Pilot Program, the tongue-in-cheek presenter praises the intelligence of the alpacas as well as their “amazing sense of smell”.

“The program is going really well. I’ve got a really good feeling about it,” she says. Her positive comments are laughably at odds with the fact that the alpacas have refused to eat from her bucket or come when they are called. They much prefer to frolic around and release their own smells.

The video was produced by the ACT Policing Social Media Team as a way of showing a more human side to policing.

Social media is not just one of many vital investigative tools available to ACT policing, it also provides an avenue for us to positively engage with the community,” said a spokesperson for the ACT Policing Social Media Team.

“It allows us to connect with the community we protect and provide a human face to ACT Policing.”

“As policing can be stressful and often people only see the serious side to our work, opportunities like this allow us to show a lighter and more human side – and assist in showing Canberra that while we take our job very seriously we still have a sense of humour and are part of their community.”

With the video going viral both in Australia and overseas, the initiative seems to be a success.

“Can’t wait to see these wandering around the airport,” one person commented on the post.

“Sir did you alpaca these bags yourself?” said another.

“Their spit is more powerful than a taser,” commented another person.

View the ACT Policing Facebook video for yourself and let us know what you think of it:

Julie Macklin - 19 minutes ago
Carole Ford Not many people cycle for sport. Most people use it for transport. View
Mark Johnson - 7 hours ago
If it’s not licenced what’s it doing on a roadway anyway … View
News 20

Mark J Avery - 52 minutes ago
Try working next door to this dumping ground!! View
Roger Kropman - 5 hours ago
This is a disgrace but it reinforces the point that rubbish dumps / tips should be free to dump your trash, otherwise idiots... View
Nick Savino - 9 hours ago
CCTV and fine View
News 14

@The_RiotACT @The_RiotACT
Snapper at the Canberra Southern Cross Yacht Club is getting a makeover. Check out the plans https://t.co/Ul1f9X7YUR (49 minutes ago)

@The_RiotACT @The_RiotACT
A mishap at the Murrumbidgee Country Club put half the greens out of action, but general manager Ray Duncan says the club will be back better than ever https://t.co/U6mM0hq6S0 (4 hours ago)