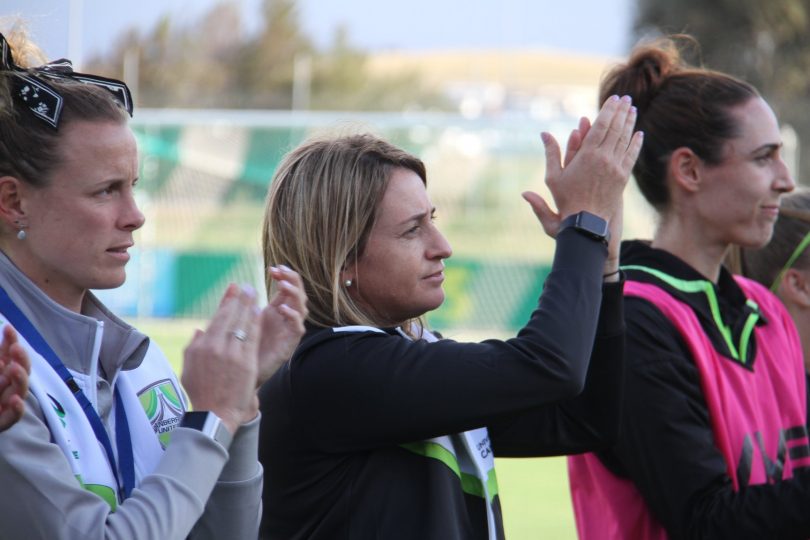 Outgoing Canberra United coach Heather Garriock has been given a perfect send-off in her final home game, with the team breaking a four-game losing streak in front of a rapturous crowd.

“Heather is a veteran in the Matildas so she knows her way around and what to expect and whatnot, so she has definitely helped me in areas and helped me prepare myself going in,” Roestbakken said.

“[The advice she gave me] was to back myself. Going in there is going to be high-intensity, it is a different sort of game, a faster game. [She taught me] to switch on and read the game better.”

Garriock returned the favour, saying “Karly was outstanding during the qualifiers, especially in the second game [against Thailand]”. 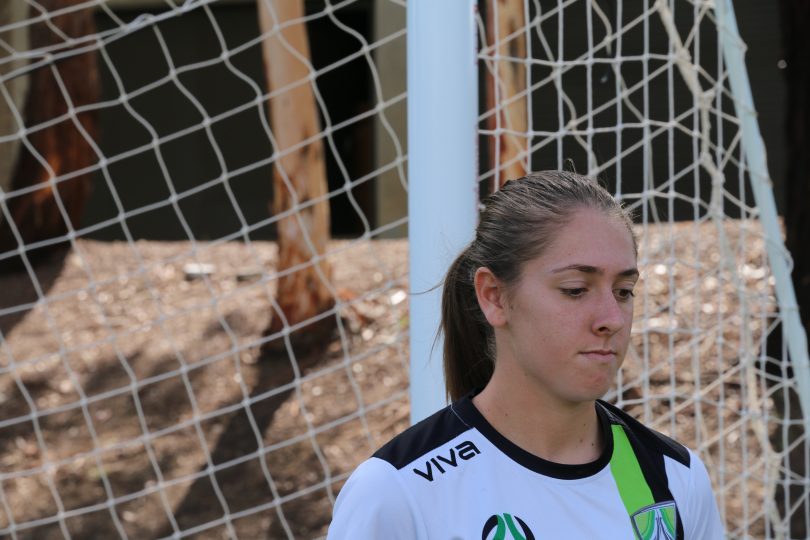 Karly Roestbakken played one of the best games of her career for the Matildas against Thailand, outgoing coach Heather Garriock said. Photo: Dominic Giannini.

“She has improved from the beginning of my time three years ago to where she is now. Technically, her tactical awareness is phenomenal so she will only grow into a much better player,” Garriock said.

“It was one of the best matches I have ever seen her play.”

Garriock has also compared youngster Hayley Taylor-Young to the Matildas’ Hayley Raso and Ash Sykes, touting her as a future star.

Taylor-Young’s teammate, Laura Hughes, who like Roestbakken has played with Garriock since her inaugural season, thanked Garriock for her dedication last week.

“It is upsetting as a club to lose a coach like Heather,” Hughes said.

“She has given me an opportunity to perform at this level and I have transitioned well into cementing my spot in a W-League squad. I am forever grateful, so I am hoping to play well for her over these last couple of weeks.”

Hughes, who scored her first goal on the weekend against Adelaide United, was similarly praised by Garriock.

Coach Heather Garriock shares an emotional moment with the team during her last home game at McKellar Park! #GoGreen pic.twitter.com/BzkcGgbs0k

“The players I signed are the players that performed when it counted, for the fans, the club, themselves and for me in my last home game,” Garriock said.

“Some of the players really stepped up [on Sunday], especially Laura Hughes. The way she scored that first goal to start off the game was just outstanding,” Garriock said.

“I am so proud of her and the other girls for that matter.”

And the girls were just as proud of their coach.

Striker Leena Khamis dedicated her goal celebration to Garriock, pointing back at her coach and longtime friend, while Simone Charley and the team rushed Garriock on the sideline as they netted their third, sealing the game.

“I have not been emotional over the past couple of weeks, it has been more self-reflecting,” Garriock said.

“I had a tear in my eye, especially after Leena’s celebration and Simone’s as well.

“That was emotional because you spend a lot of time with these players day in and day out. For these players to show their respect was a really nice moment.”

Roestbakken says the team is concentrating on bringing home the three points in their final game of the season to honour Garriock after dedicating their win against Adelaide to their outgoing coach.

“I have been with her for three seasons now, so we have to show our appreciation to her and let her know that we really do care for her and that we are going to miss her very much,” she said.

“Knowing that Heather was leaving after this season, we really wanted to go out there and do her proud and get the win for her to finish the season off strong.”

Capital Football decided not to renew the former Matilda’s contract at the end of this season after three years of failing to make the finals with Canberra, removing the W-League’s only female coach in the process.

Garriock has been critical of the lack of opportunities for female coaches in Australia. She tried to fill the gap by becoming an inspiration to the next generation of Matildas’ players in her squad.

Canberra United will look make the most of a tumultuous season by sending Garriock off with a final win over the Brisbane Roar on Sunday (23 February).