Gazing back into the past, via the Woman's Mirror 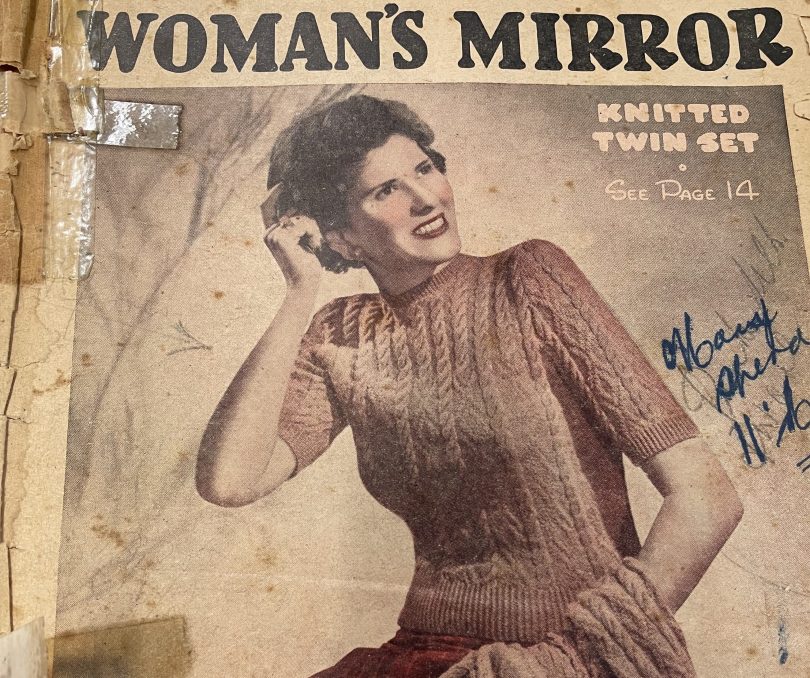 The Australian Woman’s Mirror, June 29, 1949, complete with a racy pink knitted twin set on the cover – and helpful additional scribbled advice about what needles to use. Photo: File.

The Australian Woman’s Mirror – back in the day, it was a go-to source of advice, tips and entertainment for women.

Published from 1924 to 1954, Region Media uncovered this gem from 22 June, 1949, in a pile of op shop donations – along with a stack of 1930s French magazines called Mon Ouvrage and a couple of ABC of Dressmaking booklets: Sewing and Finishing and Simple Home Tailoring. Clearly cutting-edge stuff.

In between them was a price list from Webster’s Quality First Biscuits from its Brisbane head office. Boomerang creams were a big seller apparently, with their “delicious banana cream filling, crisp and delicious to the taste – a shortbread biscuit of unusual shape and unusual name”. You could also get Peter Pan biscuits “in all manner of quaint and dainty shapes, horses, bears, camels, policemen, boy scouts, lions etc”. There was also something called Golf Creams – probably had holes in one/some of them.

But it was the copy of Woman’s Mirror that was un-put-downable. For a start, it had a baby pink knitted twin set on the cover, complete with the full pattern inside. (Love the handwritten scribble on the cover, advising the use of No 11 needles).

Inside, it only got better. There was an interview, under the heading Unusual Vocation, with a – gasp – female lugger operator. “I marvelled that this slight, blonde, well-groomed woman could carry out so successfully a job that has taxed so many men,” it read. In the interview, Miss Lugger told the journalist some of the problems she faced as a woman on the crew: “There were 12 on board and they took some controlling”.

Little seems to have changed between then and now regarding the serialised novels such magazines feature. Synopsis: jilting her fiance on her wedding morn, Julie Fortune (of course her name is Fortune), girl-about-town (ditto), drives her car into the country – and you just know there’ll be a tall, dark, troubled, handsome stranger lurking nearby, continuing to look troubled. There were more such yarns inside, with heroes called Drake and women with dark doe-eyes, mostly called Destiny. 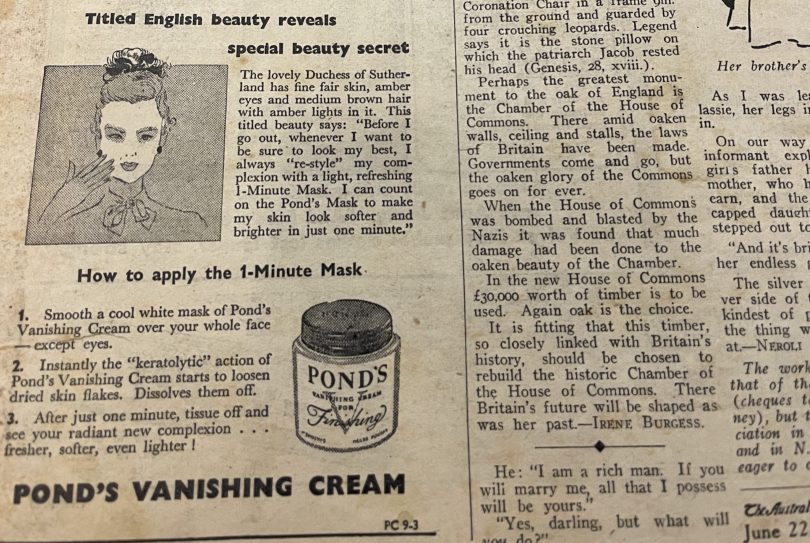 Back in the 1940s, there was only one face cream ladies would allow on their titled faces. Photo: File.

But it’s the advertisements which can give you the best read. Like pure Velvet soap which asks users to tell of their experiences with the sudsy number. “My 39-year-old supper cloth (seriously?) is as good as the day I received it, thanks to Velvet Soap,” according to a Mrs Stewart of Ballarat. Miss Laube of Mount Gambier also waxes lyrical about the towel she has had for 18 years. (It’s probably too late now, but someone really should have done a whip-round and bought these folk new stuff.)

Another familiar sight is Pond’s Vanishing Cream, and you know it’s good because a “titled English beauty … the lovely Duchess of Sutherland” swears by it. She’s probably too refined to swear so she must have just liked it a lot – and has learned to apply it quickly before it, well, vanishes.

There was also good news for those who suffered from “irregularity”. A particular breakfast cereal was everything to everyone – “a natural laxative, health food and blood tonic”. You could probably also use it as mulch.

If you had “superfluous” hair, you could kill it off quickly with Exhair. “Perfectly harmless. Guaranteed. Send stamped, addressed envelope for particulars. CONFIDENTIAL.”

Looking for tips on bringing shine to the top of your fuel stove? “When the stove fire is quite hot, rub steak fat over top of it. Leaves a shiny surface no polish will do.” Bonus: you can also use it as a shiny new home for rodents.

There was also a page called Mainly About Men, which we of course didn’t read. After all, we women have principles.

My wife loves it when we find these old magazines. Funny how the old ideas become new again. I found the page called Mainly about Men was a blank page and used for a shopping list.

Chuckle as you might but these old mags are a treasure trove for those looking to re-create the era’s fashions. They contain many original designs perfect for a distinctive look.

Steve Ross not to mention that these magazines also assisted families in saving money by the women using them to ‘make their own, recycle, reuse ‘ ahead of the more recent trends of doing so…