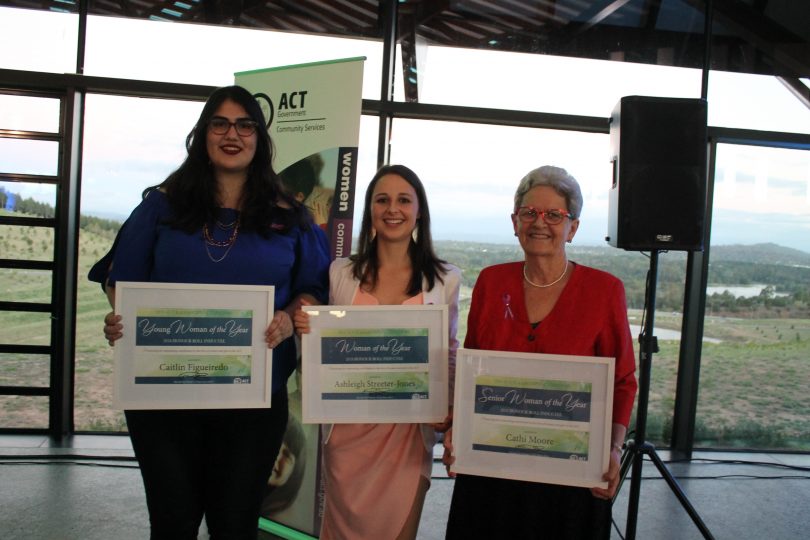 Canberra women doing extraordinary things to bring about change in gender equality were recognised at the 2018 ACT Women’s Awards held at the National Arboretum on Tuesday night (6th March).

Caitlin Figueiredo, an international champion for gender equality, was recognised as the ACT Young Woman of the Year for her work advocating for women and girls.

As the Alannah and Madeline Foundation Ambassador, she has also helped transform the lives of local Canberra girls by supporting the foundation to end violence and bullying.

Cathi Moore was recognised as the ACT Senior Woman of the Year for her role in key community service organisations and government boards for over 30 years. Ms Moore has served as president of YWCA Canberra and as treasurer of YWCA Australia where she campaigned for a 30 per cent quota for women under 30 years old in governance positions at a national and local level.

Ms Moore is a founding member of a pro-bono coaching service for women who have escaped violent relationships, called, ‘My Coaching, My Future’.

The Minister for Women, Yvette Berry, said that the 31 nominations received were “indicative of the exceptional pool of talented women in the ACT”.

Ms Berry congratulated the nominees for their “extraordinary contributions to our community” and extended her thanks to “the people who valued their achievements and submitted nominations on their behalf”.

The event also relaunched the Women’s Honour Roll, which records the names of Canberran women who have received honours in the ACT since self-government in 1988.

More than 300 women are represented on the Honour Roll, which will be added to every second year to mark International Women’s Day celebrations for the ACT. The names of the inductees with their achievements are listed here.

Arleen Stark - 28 minutes ago
That is all very well Ian, but a branch does not have to be dead to fall. We have had 3 huge branches fall in the last 2 year... View
Colleen Whichelo - 2 hours ago
The trees need to be in the bush where they belong & where no humans reside. Bloody gum trees are the worst most dangerous of... View
Ulrich Belcher - 9 hours ago
Took a full 3 years to have a council tree inspected after I lidged the job and chased it up many times, even though it was a... View
News 240

TheSilver - 2 hours ago
Yes, I'm aware there are observational and laboratory studies. I am sceptical of those because it isn't obvious how transfera... View
chewy14 - 9 hours ago
The Silver, I get what you're saying but it has no relevance to my point about the effectiveness of the QR code system for st... View
chewy14 - 10 hours ago
I actually think the death "calculus" is pretty clear that restrictions will win out every time. But that doesn't reflect the... View
Opinion 50