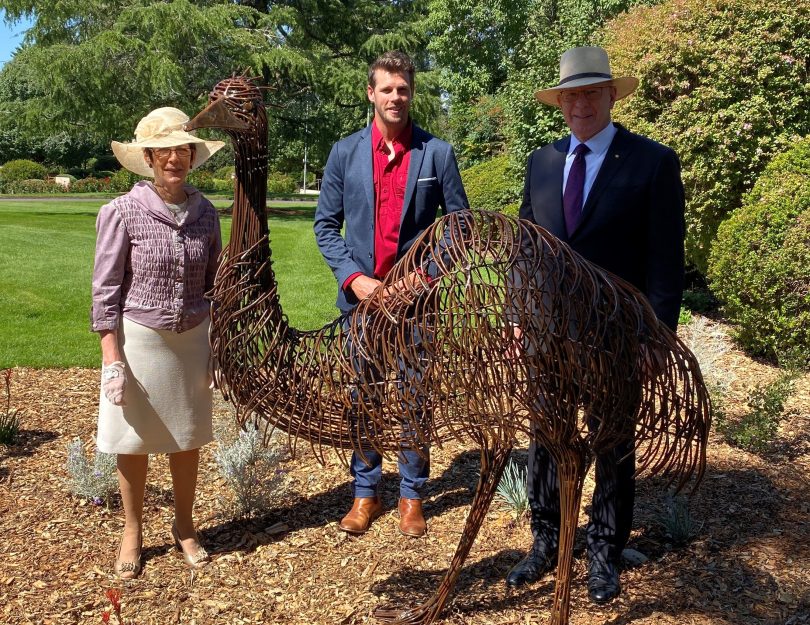 A sculpture in metal entitled Relaxed Coat of Arms will form part of the unveiling of the concept designs for a new garden at Government House to celebrate the Queen’s service to Australia and devotion to duty.

Thirty-two-year-old Welsh-born Humphreys has enjoyed the kind of career most people can only dream about. He describes himself as a third generation woodsman, but he grew up in the gate tower of Usk Castle, a 13th century Norman fortress in Monmouthshire, Wales.

His special gift is to see things differently; a figure within a lump of wood, the potential shape in a tangle of metal pieces.

With just a chainsaw and sandpaper, Adam taught himself to ‘liberate’ the shapes from the wood. In 2018 he went on to experiment with bent and hand-welded metal. 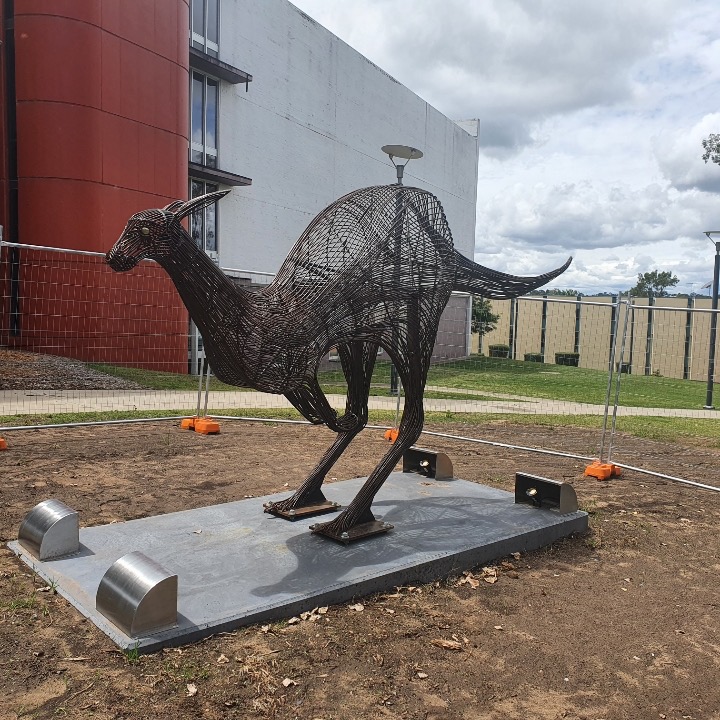 This kangaroo sculpture made by the Back Track workshop group is part of the assemblage. Photo: Supplied.

Thirteen years ago, aged 20, Adam was artist-in-residence at the famous Crisp Galleries near Yass where his first major one-man chainsaw sculpture exhibition was held.

“Adam’s first chainsaw sculpture in Australia, of a horse galloping out of the end of a tree was for former deputy Prime Minister John Sharp at his home in the Southern Tablelands,” said friend and mentor, Peter Crisp OAM, an invited guest at the unveiling ceremony.

Adam went on to be commissioned by the Gunnedah Indigenous Centre to create a life-sized sculpture of the famous Aboriginal warrior Windradyne. And all this before his 22nd birthday.

Adam began working with metal in 2018, going on to create large-scale pieces – as much engineering feats as mastery in detail. His work has been inspired by his travels and experiences in Botswana, North America and as artist-in-residence at fabrication workshop “Metal Works” in New Zealand.

Now, with pieces in public and private collections across the UK, southern Africa, New Zealand and Australia, Adam is based at Tamworth where he is mentoring and teaching at-risk young people working with BackTrack Youth Works, founded by 2020 Australian Local Hero of the Year, Bernie Shakeshaft.

Married to Australian TV presenter and journalist Emily Herbert, Adam is considering moving the family back to Usk Castle one day. Australia has been lucky to have him for just a little while and will now be able to enjoy his beautiful and intriguing Relaxed Coat of Arms sculpture in the grounds of Government House, Canberra.