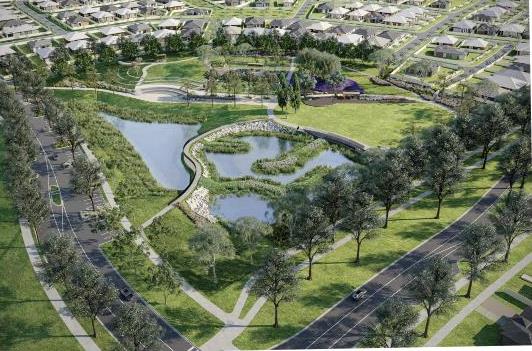 The Community Recreation Park is the centre-piece of Strathnairn. File photo.

The next phase of the Ginninderry housing development in West Belconnen has been released with 122 blocks going out for public ballot.

It is the largest single release of blocks in the development to date, a joint venture between the Suburban Land Agency and the Corkhill family’s Riverview Developments.

Project Director Steve Harding said this release was a great opportunity for buyers to become part of this community.

“After many years of planning, the initial stages of Ginninderry are taking shape,” he said. “We’ll welcome our first residents later this year and a ground-breaking new display village is under construction so now is a great time for those considering land to take a look at how we’re doing things differently”.

“We’ll also have mixed-use courts for basketball, netball and soccer along with cricket nets and all of that sits alongside the vast natural amenity offered by existing conservation areas that are such a feature of the area,” he said.

Ginninderry stretches from the north western suburbs of Canberra (Holt and Macgregor) across the ACT/NSW border into a part of the Yass Valley, and eventually will contain a range of 11,500 dwellings housing up to 30,000 residents on completion in 2055.

Renee Mae - 14 minutes ago
Yes there are root causes but especially here in ACT we can't ignore rental affordability (or lack thereof). So many women ar... View
Property 25

Acton - 26 minutes ago
Certainly low documentation loans raise the risk of default. As well, to add to the risk factors now are greater use of mortg... View
Capital Retro - 3 hours ago
It is timely to revisit what happened in the USA 11 years ago because with speculation that there will be government guarante... View
Acton - 3 hours ago
Low interest rates mean people borrow more. Large loans means people have more money to spend and higher buyer demand pushs u... View
News 1

Acton - 43 minutes ago
If the Greens think that lowering the voting age to 16 will result in more Green votes, they may be very disappointed. There... View
News 4

Nick Swain - 2 hours ago
This business proposal was totally inappropriate for Fyshwick. They would have killed many Fyshwick businesses by clogging up... View
simm - 2 hours ago
A giant fragmentising metal shredder is not the right idea for any built up area. . Other states stipulate a 1200 meter Separ... View
Shayne Borger - 13 hours ago
This council is killing Canberra and business with initiative View
News 1

‘A borderless community’: how ACT could run Ginninderry’s policing, waste

@The_RiotACT @The_RiotACT
A planning change may be the saviour of Canberra's local shops. Find out why https://t.co/NRFX6sTphF (58 minutes ago)