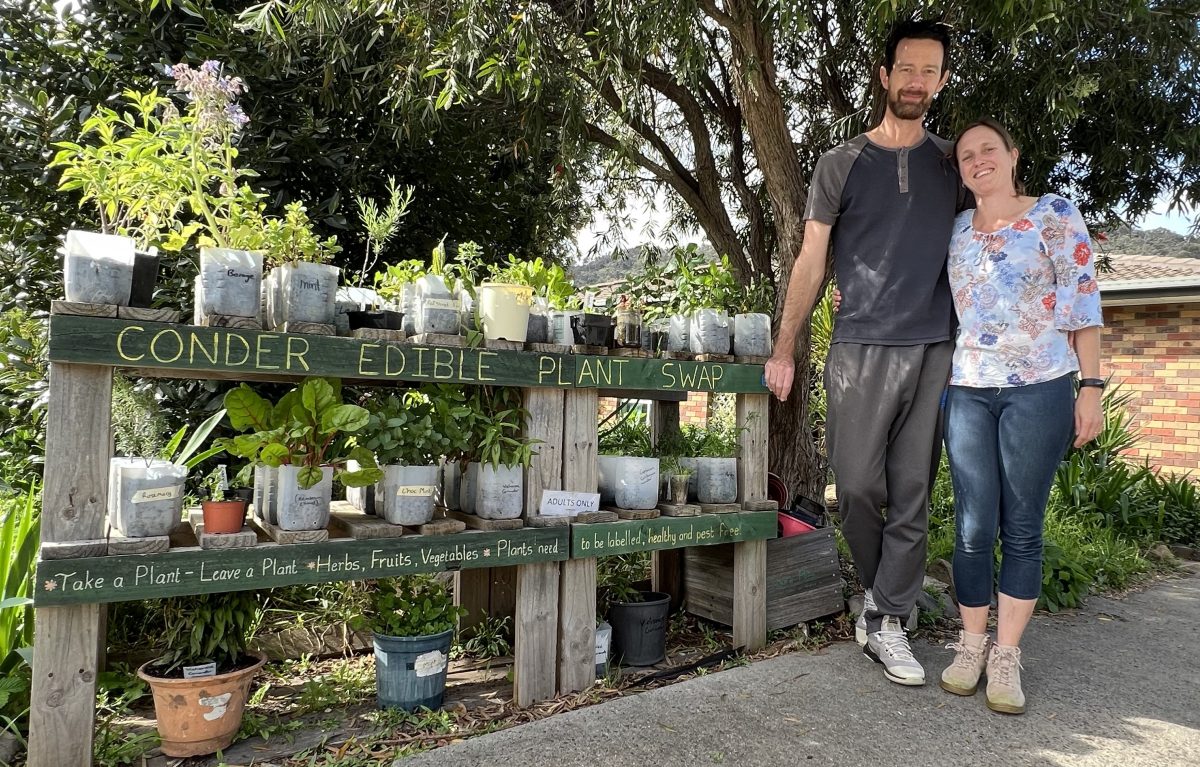 Want to discover a new seedling for your garden? Check out Steve and Belinda Coad’s Edible Plant Swap in Conder. Photo: Claire Fenwicke.

Travel down a cul-de-sac in Conder and you’ll come across an even greener version of a street library.

Steve Coad and his wife Belinda have set up the Conder Edible Plant Swap, a place to discover different plants to try in your own market garden.

It all started when the COVID-19 pandemic first hit and supermarket shelves were being stripped bare by panic buyers.

While the couple had a backyard garden of sorts, their chickens would gobble up seedlings as soon as they were planted.

“We used to have a lawn in our front yard so that turned into a big edible garden,” Steve said.

“Then we discovered we had too many plants.”

Rather than throwing away the excess plants, the idea also became a great way to recycle.

The Coad household’s also home to four boys, which meant they went through a lot of milk.

“The goal became for every milk carton we had, we weren’t allowed to throw it out, it had to turn into a plant,” Steve said.

Once they had 200 plants happily transplanted into the milk cartons, the family set about constructing the plant swap out of wooden pallets and set up a Facebook page.

The rules were simple: to take a plant, you had to leave a plant, it had to be edible, and the plants left behind needed to be labelled correctly, healthy and pest-free.

The edible rule was inspired by the need to become more self-reliant during COVID lockdowns.

“The more you can take care of your own needs, the less you need to buy, so it sort of turned into an extension of our front yard,” Steve said.

An ‘adults only’ sign needed to be added after the first few weeks to ensure only correctly transplanted seedlings were put on the shelf.

“It’s after about 30 plants appeared in pots of mud,” Steve said.

“We thought, ‘we love the fact that you’re swapping, but you’re just going to have to bring your parents along’.”

The couple checked every plant left on the shelf to ensure it was potted correctly and contained what it said it did.

“We occasionally take things off and take it out back, let it grow a bit to make sure we know what it is,” Steve said.

Some surprising plants had been left behind, such as borage, which are edible flowers.

The experience also led Steve and Belinda to discover more about plants than they ever thought they would, including finding out that a weed growing throughout their plants was, in fact, edible – known as sheep’s head sorrel.

“We were watching a video late one night and they were talking about edible weeds, and it turns out you can eat it,” Steve said.

“It was midnight, and it was raining, so Belinda and I ran out to the front yard, and we’re like, ‘ok, we’ve been fighting this weed forever’ and started eating it.

“It tastes like lemons. It turned into our way of having a little snack.”

Steve and Belinda now had so many plants they had donated some to a local community centre and schools to start their own gardens.

The pair were also experimenting with growing coffee plants in their bathroom and discovered some plants they thought you had to dig up every season were thriving, such as spinach and celery.

“We don’t tend to rip out stuff … it’s amazing how many things don’t die if you don’t rip it up,” Steve said.

For those wishing to set up their own edible plant gardens, Steve advised keeping it in a place you could keep an eye on, constructing the stand in a shaded area under a tree, and keeping a close eye on what plants turned up.

Then you could sit back, discover more about plants and create more connections in your community.

“We meet our neighbours a lot more now,” Steve said.

The Conder Edible Plant Garden can be found on Darebin Place.

Melanie Lindner-I know it’s a bit of a drive but might be worth a look for you?

Philippa Ellis there’s one in the neighbourhood I think – might have to look into it.

What a great idea!