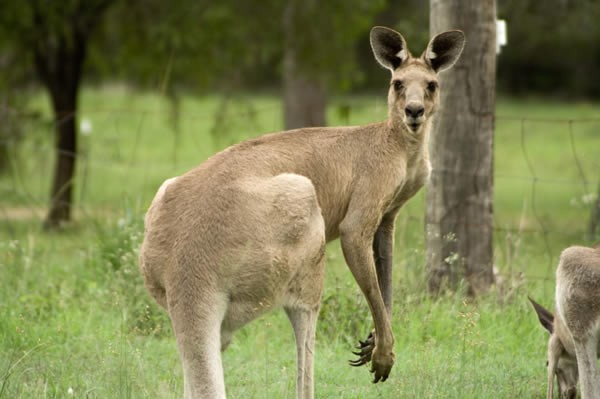 The 2018 ACT kangaroo cull has finished.

Over 3,200 grey kangaroos were killed across 12 nature reserve sites in this year’s cull to protect vegetation and threatened species, 661 more than last year, according to the ACT Government.

The 3,253 kangaroos killed by professional shooters included 1,822 within the ACT border and a further 1,431 at the Googong foreshores in NSW. This was the target number the Government announced in May.

The Director of Parks and Conservation, Daniel Iglesias, said the cull was undertaken without incident. 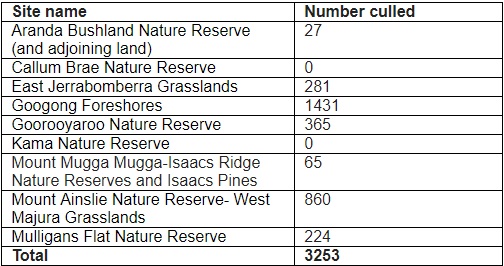 Graph of the 2018 kangaroo cull. Supplied by ACT Government.

Mr Iglesias said many of the sites were challenging due to their small size and location on the urban fringe and praised the professionalism of the contractors and staff.

“Googong Foreshores contains a number of threatened ecological communities and plant and animal species. It forms part of a corridor of relatively intact vegetation, extending from the Tinderry Range to the north-eastern ACT, so this cull will help protect the area, including the ACT’s water supply,” he said.

Mr Iglesias said an ACT Government veterinary officer undertook spot checks during the program and found the cull was undertaken humanely in accordance with a strict Code of Practice.

“This kangaroo management program plays a critical role in protecting the environment at these locations,” Mr Iglesias said.

“Ensuring the grasslands and woodlands, which provide habitat for creatures such as lizards and ground-feeding birds, are not overgrazed, and avoiding excessive soil loss, will help to protect them whilst still maintaining sustainable numbers of kangaroos.”

All nature reserve sites and unleased lands that had been closed for the annual kangaroo conservation cull were re-open to the public on Thursday (21 June).

The ACT Govt hits it’s target of Colonialism. 230 yrs of Invasion & some have learnt nothing except to reinforce the sickening greedy Colonialism that also saw the Tasmanian Tiger gunned down into extinction & claimed to be overpopulating prior & labelled a pest.
As an Indigenous Woman I’m sickened by the ACT Government & their slaughter of The Dreaming,

So, does that mean that Kangaroos are rehabilitated by volunteers only to be released back in the wild to be shot?

From the amount of roadkill I see driving to work, it looks like the ACT government is quite happy to let the motorist do the culling

When natural predators are removed this seems the most practical, humane way to control the population. I hate seeing animals killed but sometimes adulting is hard.

Cienwen Hickey. What is the point that you are making? I was talking about the need to manage sustainable wildlife populations. Personally I follow my beliefs and I don’t kill so I would not cull and I try not to impact heavily on wildlife.

I killed a kangaroo this year because it hopped out in front on my car and I almost stopped but skidded over and broke both of its legs. I got tyre iron out from the car and hit it over the head and killed it quickly. I couldn’t drive for a while because of my tears. As I said, adulting is hard

Cienwen Hickey Cienwen, not at all. I don't agree with your ideas at all. I was merely trying to exit pleasanty.

What is Mr Iglesias doing about the feral deer, goats and pigs that are polluting the Googong water catchment in the Tinderry Ranges?

You should just go to Dickson oval

Jacq Miller - 5 hours ago
shame there are no longer all 4 in situ View
Barry Matson - 8 hours ago
of what? View
Michael Guina - 9 hours ago
It has to start somewhere and those two buildings are living example . View
Opinion 80

Max Kelty - 9 hours ago
Bel Lee your housing manager mustn't be doing their job then or else processes have changed. When I was a HM at HACT people w... View
William Coats - 14 hours ago
The land tax was to stop people “land banking” houses should be used as homes not stagnant investments View
Lea Powell - 19 hours ago
William Coats it takes time to change policy directions. It’s not as simple as a click of the fingers. View
News 8

bj_ACT - 19 hours ago
Yes razor it’s a good point. Agree there are pockets of Tuggeranong and Belconnen that could do with some ACT government do... View
mattm - 20 hours ago
There are almost 130 Councils in NSW, and most of them do a much better job with municipal services than the ACT Government.... View
Heavs - 21 hours ago
Competent councils - like this one? https://www.canberratimes.com.au/story/6978805/nsw-central-coast-council-to-be-sacked/ Or... View
Community 1