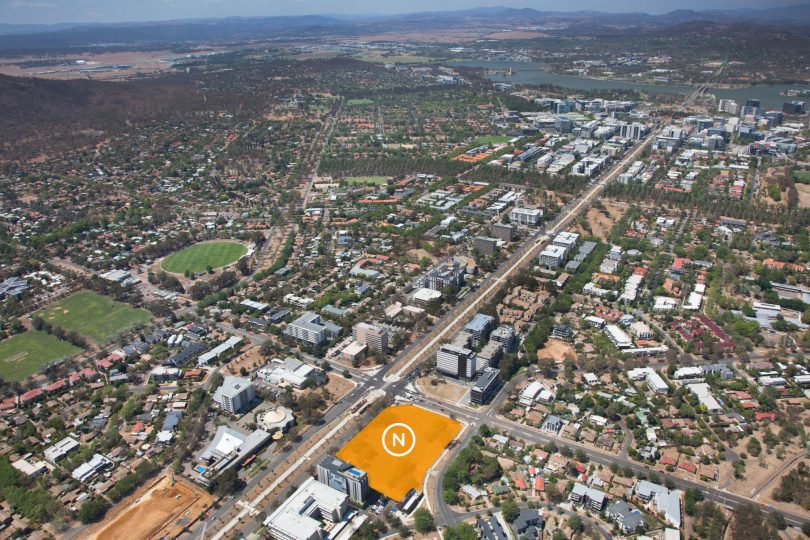 This aerial view shows the Macarthur on Northbourne site in relation to the rest of the inner north and the CBD. Photo: SLA.

The former Macarthur House site on Northbourne Avenue in Lyneham is being touted as the precinct’s next major destination – home to a potential mixed-use development of more than 400 dwellings.

The Suburban Land Agency has listed the 1.363 hectare site for sale by tender, despite the uncertain economic conditions due to the coronavirus lockdown.

It is being marketed as an opportunity to build a landmark development within minutes of the CBD and Dickson dining precincts, and with easy access to Canberra’s major universities.

The former home of a major ACT Government office block which has been demolished, the site on the corner of Macarthur and Northbourne avenues is located at a key stop on the light rail route and is part of the City Renewal Precinct.

Any development on the site will need to comply with the City and Gateway Urban Design Framework and is expected to contribute to the Northbourne corridor vision of a vibrant residential and business precinct served by cafes, restaurants, bars and boutiques.

Up to 424 dwellings and a range of commercial and community uses are permitted.

The successful tenderer will also have to comply with the Affordable Housing Scheme, which requires at least 50 dwellings be constructed and dispersed throughout the development.

Developers can build to 48 metres high on the site after changes made to the City and Gateway Urban Design Framework last year, confirmed with the approval of Amendment 91 that had been developed between the National Capital Authority and the ACT Government, and finalised in 2018.

Any proposal will be subject to both the Territory and National Capital plans, and tenderers are required to provide a Master Plan for the site.

JLL and Colliers International have been given the job of marketing the site.

Colliers International’s Shane Radnell said that although COVID-19 had cast a shadow over the economy, there was still strong interest in the Canberra residential market, especially units, and developers took a long-term view.

”Developers are looking a year down the track. They’re still very positive about the Canberra residential market,” he said.

”The economics of Canberra are still extremely strong, especially in the rental market.”

He said interstate interests would be targeted but local developers were expected to be in the running.

”The evidence has shown over the past couple of years that it is still local buyers that are certainly buoyant about the Canberra market,” Mr Radnell said.

He said that because of the site’s proximity to the CBD a developer may look to a build-to-rent option where the apartments are owned by the developer, often a through managed investment trust, and leased out to tenants.

The site was initially to be sold as part of the Federal Government’s asset-recycling scheme, but missed the 30 June 2019 deadline.

The tender closes on 13 August.

“….. is expected to contribute to the Northbourne corridor vision of a vibrant residential and business precinct served by cafes, restaurants, bars and boutiques.”

It’s probably un-Australian to write something about property development that doesn’t include “vibrant” or “vibrancy”, but the question has to be asked whether such concepts will be permitted in a post-virus, socially-distanced, CovidSafe-apped world…….

Surprised it hasn’t been swapped for a chunk of the lake!

Shel Morris, this is very close to our place in O’Connor.

Would have been nice as an inner city park. Basketball courts, soccer set up.

Simon Dw Disndat on a busy intersection with no parking? Brilliant.

Simon with the light rail system, you can just ride up to Dickson for netball, basketball and football fields.

‘Government greed knows no bounds. It would be an ideal park.

It will go to consolidated revenue.

Is that the block with the fencing around it that looks like it has been green space with trees etc forever, or is it a demo site? I am amazed that the green space one looks like it will be built on. I would’ve thought at least 1 park for residents on Northbourne would have been appropriate. Thats a lot of people with no where to take their kids and dogs.

Used to be ‘MacArthur House’ (Corner of MacArthur Avenue), then it got toppled around 2018.

Robin I worked here on an off for many years

Kriso Hadskini where exactly is that? All blocks planned for housing already had buildings on it.

Kriso no it has always had a building, till it was knocked down. It is opposite the ABC and the hotel on Macarthur and Northbourne. That area has lots of green space along the drains and at the oval further up Macarthur, along with the schools