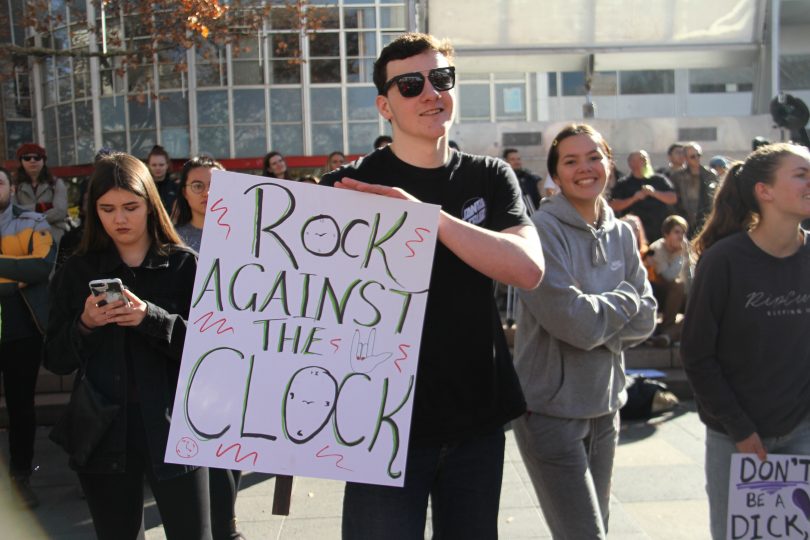 A live music supporter with a message for the Government at the June protest in Civic. Photos: Region Media.

The ACT Government is playing catch-up with its plan for entertainment hubs across Canberra, which it hopes will appease both the live music industry and residents who have bought into the many mixed-use residential developments in the city and town centres.

These sorts of developments, with commercial operations such as restaurants and bars on the ground floor or in basements and many floors of apartments above, now dominate the urban landscape bringing inevitable clashes of interest.

It’s one thing to encourage people to move into town and enjoy the vibrancy of inner-city living and another for them to face the consequences of sharing that space with businesses and amplified music deep into the night.

It is incredible that it has taken this long for the Government to come up with a plan, more a series of possibilities, when it should have been obvious to planners and developers all along that if people were going to share their life with hospitality and entertainment there would have to be appropriate zoning, soundproofing and built-in design solutions such as sufficient insulation and thick windows to keep out noise of all kinds.

It’s not as if the issue has come out of the blue.

The strata management industry has been on the Government’s case for years about reforms in the mixed-use sector.

Woden Valley Community Council has been calling for some sort of entertainment precinct in the area for years, knowing that there was nothing on offer to draw young people into the town centre and that such a precinct would need its own rules.

In the town centres, now is the time to delineate where noise can be made, for businesses and future residents, before they are fully developed.

The ACT Greens have backed the music industry and called for entertainment precincts with appropriate noise regulations, and leader Shane Rattenbury supported the June protest from musicians who fear residential encroachment will shut down its venues. 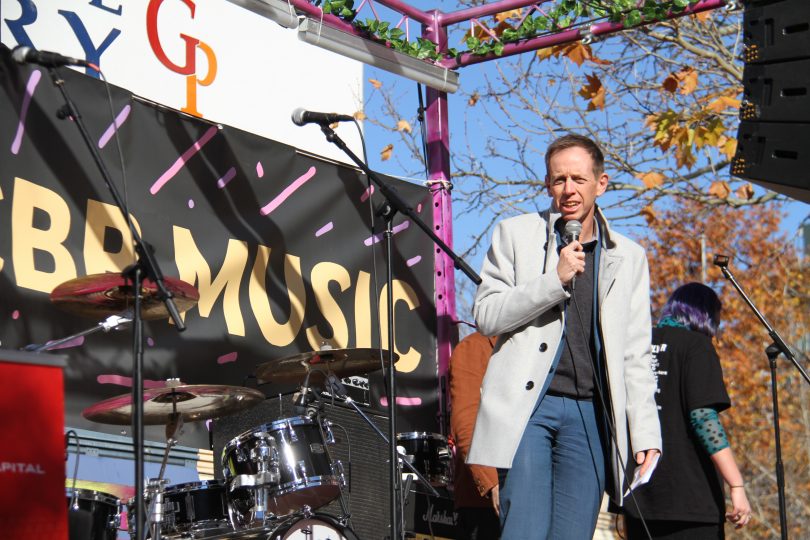 “At the moment, there is a risk that more people residing in the city will slowly close down our live music venues,” Mr Rattenbury told Region Media. “That’s why the Greens would like to see an entertainment precinct put in place in Civic, as well as other places across Canberra.

“We see entertainment precincts as an opportunity to be clear with the community, businesses and residents alike, about how much noise can be made, and in what hours.

“At the moment, there is no right for pubs or night clubs to make noise. Instead, this is currently based on a complaints system. Designating entertainment precincts is a far better option.”

Some might argue that if you decide to live in the city you should accept what that means. Why, for instance, would you move into an apartment on Glebe Park and complain about concert noise from nearby Royal Theatre? Why live in Civic and not expect the noise that goes with all that vibrancy?

That is just wishful thinking. If there is something Canberrans are expert at, it’s complaining.

Yet development after development has been approved, with many more in the pipeline without any real thought to how the much talked about vibrancy is going to be organised, policed and fit in with the thousands of punters buying their apartments.

It’s all a bit back to front, and a lot of retro-fitting is going to have to be done, from planning to regulation to design to actual hands-on work to hammer out a workable and livable solution.

The live music scene, in its many forms, is essential to any city’s culture and is a worthy industry in itself, supporting musicians, businesses and their employees. It deserves its place in Canberra’s social fabric.

And residents have a right to the enjoyment of their homes.

But a Civic apartment or one in the rapidly developing town centres is not a home in Rivett or Macgregor or Banks.

It’s better late than never, and it’s going to be a compromise but the Government’s ‘plan’ is a welcome step in coming to grips with a city that is evolving fast.

Sally Asnicar - 4 minutes ago
My bum was plonked in my office chair as usual and I felt nothing. Zip. Nada. On Sydney's Upper North Shore. View
Krystyna Topor - 29 minutes ago
Helen Topor wow how unnerving. Nothing noticed by me, I'm on the ground floor. Other Sydneysiders felt tremors, however they... View
Bridget Phillips - 1 hour ago
Jorge Gatica not in Downer either. My son lives in Wadonga. My daughter in law to be said it was awful there. My 5 year old g... View
News 33

Annie Wyer - 25 minutes ago
Jesse Mahoney I tried growing a whole lot in Belconnen around my complex and they faced east, they all got powdery mildew, th... View
Jesse Mahoney - 60 minutes ago
Annie Wyer I'm a post graduate trained forester with many years experience on a technical level, I know a bit about trees. Cr... View
Opinion 190

Gazza Hompepper - 35 minutes ago
Why upgrade the Canberra railway station if you cannot travel there View
Brian Kilgannon - 44 minutes ago
Moving the Kingston train station is a huge waste of money View
Brett Wheeler - 45 minutes ago
I used to love train travel but last time I tried to utilise it to go to Sydney with a pushbike, the difficulties were not wo... View
Opinion 12

@The_RiotACT @The_RiotACT
Chief Minister Andrew Barr said modelling shows #hospitalisations and deaths will increase as jurisdictions begin to reopen, even when the 70 and 80 per cent fully #vaccinated thresholds outlined in the national plan are met https://t.co/XLk2fmaq5q (45 minutes ago)