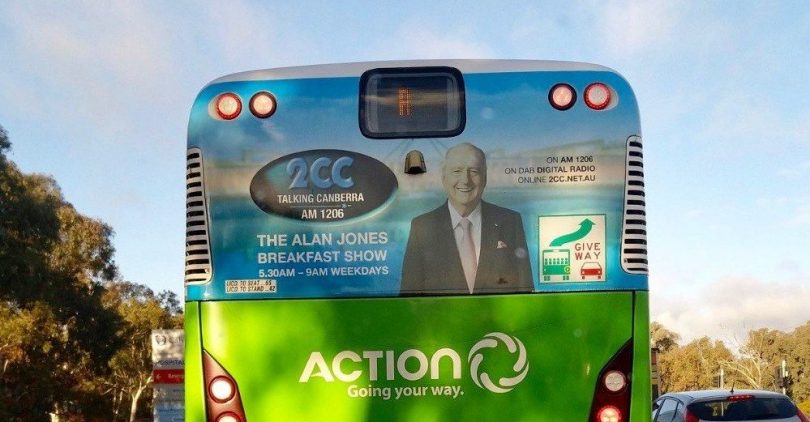 The ACT Greens have thrown their support behind a community petition calling for Transport Canberra to immediately remove 2CC’s Alan Jones ads from the back of buses in their fleet, stating that the government should not profit from Jones’ “blatantly sexist, misogynistic dog-whistling”.

A month after 2CC announced it would syndicate the Alan Jones Breakfast Show, Jones made comments on air about New Zealand Prime Minister Jacinda Ardern.

“I just wonder whether Scott Morrison is going to be fully briefed to shove a sock down her throat,” Jones said on 15 August. “Now I hope Scott Morrison gets tough here with a few backhanders.”

The petition by Canberra Women in Business, which had 165 signatures at 11:30 this morning, calls for all ads promoting The Alan Jones Breakfast Show to be removed from buses.

The petition also says that all advertisements that promote people who make sexist public comments, like Alan Jones, should be added to the bans in the Transport Canberra advertising guidelines.

“These comments show that Alan Jones does not uphold acceptable community values and does not respect women publicly,” the petition reads. “These comments could encourage violence against women, and therefore the promotion of this broadcaster is inconsistent with the values we should uphold in our community.”

The current Transport Canberra advertising policy states that ads must not represent, portray or promote “a message that can be deemed offensive or demeaning to specific community groups (i.e. religious, ethnic, women, etc)”.

2015: We banned ads for junk food, alcohol, gambling, fossil fuels and weapons from being displayed on ACTION buses.

2019: We realised we forgot to include misogynists ????#Canberra pic.twitter.com/hVPXWEfmJ5

Greens spokesperson Caroline Le Couteur said she does not want to see people who make sexist public comments promoted in a public space.

“Like most Canberrans, I find Mr Jones’ views appalling and harmful,” Ms Le Couteur said. “The ads certainly advertise Alan Jones and one of the things that Alan Jones is known for is misogyny.

“His comments support violence against women and he is not afraid to express them.

“We are in a situation in Australia wherein 2019 more than one woman a week have been killed by a current or former partner. Domestic violence is getting close to an epidemic in Australia.

“We do not need people promoting this and we don’t need the ACT Government to implicitly normalise this by allowing it on the back of their bus.”

When contacted by Region Media, 2CC station manager Michael Jones said the station was totally unaware of the petition.

“I don’t know anything about this. This is the first I have heard about it,” Mr Jones said. “I don’t know what they are on about.

“We have had no contact from Transport Canberra or the Greens or anybody about our bus backs. They should give us a call and tell us what their problem is.”

Around 80 advertisers have withdrawn their support from radio station 2GB and the Jones show since he made the comments about Ms Ardern. Macquarie Media said they would terminate Jones’ contract if he makes similar comments again.

There is nothing on that ad that says Alan Jones attacks women so there is no reason for the ads to be removed.

Indeed, I don’t believe Alan Jones (or Tony Abbott) has ever “attacked” women as you claim.

But don’t let that stop you going ahead and signing the petition.

I was wondering when these ads would receive the attention they deserve and I’m pleased to see that their removal is being addressed. A powerful message is sent to the community saying we won’t put up with this person or any other person who attack women.

We must do everything to stop the media’s dismissive portrayal of women and victims of violence.

We should call for the greens to be removed from Australia

Let’s start a petition for that – I reckon we will get more than 338 supporters.

The Greens demonstrating their inclusiveness policy again, “you’re OK to speak if you agree with us, if not you should be banned”. Love him or hate him he has a right to speak and advertise. If you don’t like him don’t listen!

Personally I can’t stand Jones but free speech includes speech you don’t like and don’t agree with. Some people need to tone down their efforts at thought control. If Jones is wrong (and he is in my view) then let him talk and then offer your own opinion. Carrying on about bus ads for a radio show when we have serious problems in the Territory that need to be dealt with is just silly.

Once again the Greens have nailed it on the important things we pay them for. I am so appalled by this I am strongly inclined to become outraged. So much so I might even stamp my foot.

Jones apologised. How is the removal of Setka going?

I don’t listen to Jones on the radio but I do watch him on WIN TV at night, mainly with Labor stalwart Graham Richardson. Jones is a brilliant presenter – I doubt if any of the haters on this blog have ever watched him. OK, he meant to say to someone “put a sock in it” and he got it a bit mangled. I don’t think the person he was referring to was offended and if she was she shouldn’t be in politics. I cannot see any misogyny or sexism in what he said – a lot of media people have said a lot worse about Jones and and no one appears to have been offended. There is certainly nothing “sexist” on that bus sign.

I watched the last few minutes of an ABC clown on Mad as Hell last night while waiting for the start of Utopia and there was a torrent of “F” words which I find offensive but hey, does anyone care?

Ms. Le Couteur should seek solace while listening to RN or something smutty on the ABC.

Surely the Greens should be kicking up a stink about the loss of Bus services across parts of Canberra, before worrying about a non-entity like Alan Jones.

I’d rather they prioritise Canberrans Bus problems ahead of this western Sydney problem child called Alan.

Is this the Canberra Bubble mentality at its most extreme (or insular)? Alan Jones’s show is the highest rating radio show in Australia yet we are told we cannot be told about it in Canberra.

If we have a petition calling for advertising for Jones’s show to be pulled, can we also have a petition to remove those government funded advertising signs on Canberra’s motorways telling us to listen to the Devil’s Radio (ABC 666) if there is an emergency? I’ll sign that one.

Only if we can ban the greens from everywhere.

hmm, aren’t these private, paid advertisements for a legitimate product?
Where will this one stop, I wonder.
Perhaps there should be a petition to remove the government funded rainbows?

I would settle for removing the government and keeping the rainbows.