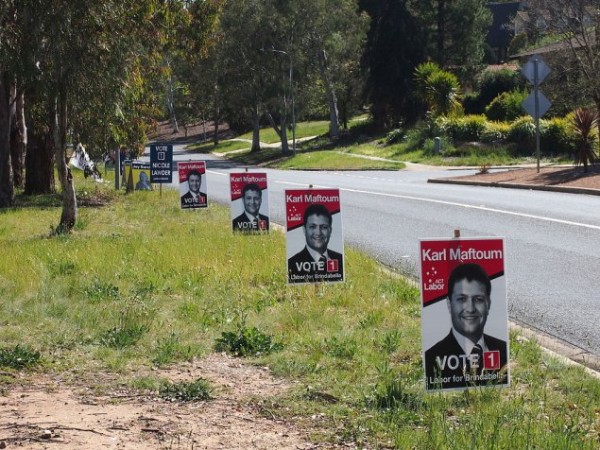 The roadside corflutes are annoying and distracting, say the Greens. Photo: File.

The ACT Greens have called on the ACT Government to ban roadside electoral signs, a year out from the 2020 Legislative Assembly elections.

They say with no limit to the number of roadside electoral campaign signs (principally the signs on stakes known as corflutes) that can be used in the ACT, thousands of the plastic signs flood the streets of Canberra six weeks out from polling day, only to end up in landfill once they are eventually cleared from roadsides.

Greens MLA Caroline Le Couteur says many Canberrans view roadside electoral signs as annoying and distracting, and add nothing to the election debate.

“There are far more effective ways for political parties to get their message across without visual pollution cluttering up our public space,” she said.

“To make matters worse, there is currently no limit on how many signs can be displayed in any one area. If you’re driving along and there are dozens of election signs along the roads, it’s both annoying and distracting for drivers.

“Many of the signs are largely policy-free – it’s not as though they are informative. It’s time to get rid of these annoying electoral signs. They’re a huge turn off for the community and are a huge waste of plastic.”

The Greens said the ACT Electoral Commission’s report on the Legislative Assembly Election in 2016 noted that social media “indicated a relatively widespread degree of dissatisfaction with the proliferation of campaign signs (principally the signs on stakes known as corflutes) across Canberra’s main roads and suburban streets” – but stopped short of recommending that the roadside electoral signs be banned entirely.

At the last federal election in May 2019, the Greens did not use roadside electoral signage; instead, corflutes were displayed in private yards or held by volunteers for limited times.

This avoided the waste of thousands of plastic corflutes being destroyed, often within hours of being erected, the party said.

Of the corflutes that the Greens do use, these ended up being recycled as house insulation, building chooks sheds, as habitat for local wombats or painted over for protest signs.

The Transport Canberra and City Services rules say signs are only covered by the Movable Signs Code, which the Government can change without legislation, for 48 hours after the official election day and must be removed within 48 hours of the close of the polling booths.

The proposal comes after the Greens proposed in September to establish a truth in electoral advertising scheme to stop factually incorrect electoral material and claims during local elections.

I agree, ban them!

I support a ban on all outside advertising.

I agree with the ban

I agree with the ban.

They could lead by example, but nooooo.

Greens don’t want the public to know who to vote for.

I was listening to a discussion about political advertisement on Facebook regarding the next presidential election and the point was made that if political advertising is banned, it typically favors the incumbent as they get the most media coverage.

What about a fitting room approach. You sign out a certain amount of corflute and the same amount must be signed in to a collection point after the campaign, from where it can be distributed for reuse by community agencies, sold cheaply to private individuals or sent for recycling.

Good idea. Hope they take it on board, (so to speak)!

Of course they’re a distraction. Under the law I’m not allowed to take a sip of my water bottle because it’s considered a distraction but it’s OK to take your eyes off the road and read hundreds of these on the roadside? Get rid of them.

It won’t happen, because the Greens’ chums in Labor do a lot of roadside advertising (likewise, of course, the Liberals).

The Greens could do their bit by organising groups of “passionate about climate change” school kids to go around cleaning up the remnant signs after the election, and perhaps put shaming pics on their Facebook page of the signs which had not been removed by those who put them there – purpose and posturing, how great would that be!

No one is forcing them to buy corflutes.

Has anyone ever looked at a political advertisement and changed their mind as to who they will vote for as a direct result of the advertising? Anyone?

The placards and signs held by volunteers are more of a distraction because they are waved to the passing vehicles, as opposed to anchored and staked placards on the roadside.

Jim Croft good for protecting plants from frost too.

Neenie Baines Absolutely. But there are some faces even worms should be spared. 🙂

All political advertising should be banned, and the AEC should release a magazine (in pdf, paper, and audio) format, where each party gets a 2 page spread to spruik their policies, and that’s it.

All parties major and minor get the same space to use wisely to advertise themselves. That way, people get easy access to what the parties are about, and parties / independents are encouraged to just produce the facts.

Brad Rogers this is s fair idea, but in Canberra under the Hare Clarke system each candidate should get the same amount of space not each party. In Canberra we are lucky to use the Hare Clarke system, because we don’t only get to choose the party that leads, but the makeup of that party. After next election we could have a government of either stripe made up entirely of new members.

Easy done then. A version for each electorate could be published with member-to-a-page. It wouldn’t be hard to automate the generation of a pdf per electorate either.

Judith Deland it could also be argued that as such a small percentage of Australians belong to a union, allowing unions to donate to one political party could be seen as unfair, as they don’t really represent a large percentage of the population.

Brad Rogers better yet make it an app so we can pose questions and receive responses from candidates #QandA style. Might be best to have moderators to cut out the trolls.

Brad Rogers what should we call it? SoapBox? Hare Clarke Tinder?

Paul Dowden not even. Just call it the election book. Make it plain olive packaging as well, because some politicians are quite cancerous….

Meh, I don’t smoke them.

This is actually a pretty good idea. Love it.

Yes! Thankyou! This is exactly what I’ve been saying! A fantastic idea.

The general idea to limit use of plastics is fantastic

Limit the amount of signage. The major parties just go bonkers trying to drown each other out with roadside signs in any one place.

A tree for every sign! Let’s see who cares!

I wonder if they would actually enforce it? They didnt with candidates parking trucks with election advertising billboards parking illegally on the nature strip as we witnessed in the last election (middle of Limestone Ave, Gungahlin Dr) breaking the laws the office they are running for enforce. Or I’m guessing there is a nice loophole which allows it for elections?

I thought the corflute in recent elections was reused, though I don’t know how much ongoing demand there is.

Labor pushed and got a ban on them in the northern beaches of Sydney, Warringah.

Why don’t we all just live in caves, eat dirt and be done with it.

Okay, you do that, the rest of us will live in the 21st century.

They are “the blight on the landscape”.

OMG!!!! I actually agree with something the Greens have said. What is happening to me?!?!?

This I can agree with the greens on this!

Not to mention they are dangerous to motorcyclists, especially along William Hovel where they get picked up by the wind.

Maybe limit the amount of signs they can place in a certain area, but no to a complete ban because then the same rule would then be applied to School Fetes and School Open day announcements along with many other community based signage!!!

How about banning the greens from making any suggestions

You don’t believe in democracy?

Not sure how independent candidates would get any electoral oxygen without them. I would have thought given we’ve had the same party in power for over 25 years (and in all likelihood another term) the Greens would be all about helping democracy in every way.

Yep!? And I have to pick them up and put them in the bin. But I like my job so I don’t really mind.

That gets my vote

Eric Zurcher what will archery team do without these? /s

Leese Wills targeting revenue is probably more like it.

Seriously though, throwing out a lit match or cigarette can cause so much destruction and not only loss of human life but ecological impacts. But the litter laws are backwards, considering it’s only $435 for an unrestrained child and $150 for smoking while a child is in the vehicle.