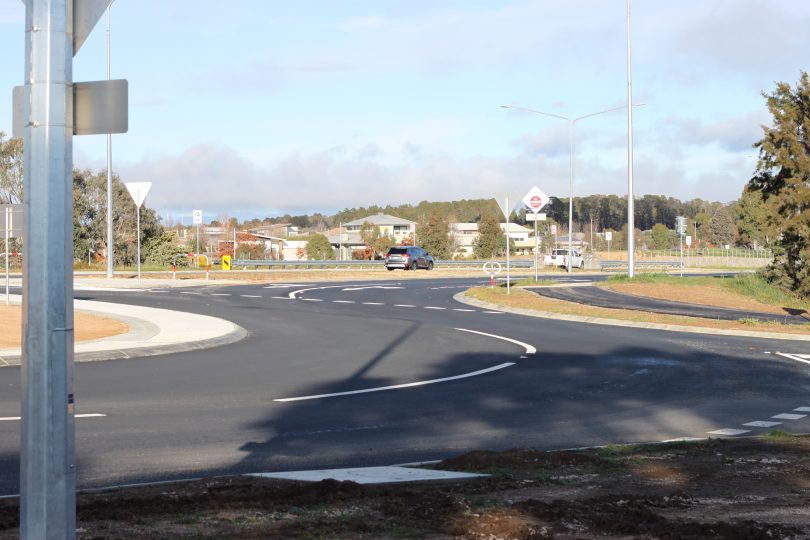 The Gundaroo Drive duplication has been completed two years after it started construction. Photo: Supplied.

The 2.5-kilometre duplication of Gundaroo Drive between Gungahlin Drive and the Barton Highway is complete, two years after it started construction.

While the speed limit will eventually be increased to 80 km/h, the road work limit will remain in place while landscaping is undertaken over the coming weeks. Around 450 trees and 50,000 shrubs are being planted along the recently duplicated road.

Roads Minister Chris Steel said the duplication will lead to a better and safer road network in the ACT.

“This was a bottleneck prior to the duplication and so the combination of both the upgrades we have made to the Barton Highway roundabout with traffic signals and the duplication will save people minutes off their trips to the city and through to Belconnen,” Minister Steel said.

“We have also put in extra bus stops as well for the black rapid route, which provides that strategic transport connection, rapid services running every 15 minutes or less through to Belconnen.

“It will provide a quieter, smoother and fast connection through to Belconnen and the city.”

Duplication on the road connecting Belconnen and Gungahlin between the Barton Highway and Ginninderra Drive will begin work in the coming months. A tender for the project will be released in July.

“We are expecting some delays with the construction of the Williams Slim Drive duplication,” Minister Steel said. “That will start construction in Spring.”

Four lanes were opened between Nudurr Drive and the Barton Highway in June 2019.

Remember when Rattenbury thought he could discourage Gungahlinites from commuting by car? ?

When do we get the off road cycle paths?

Real problem is that roundabout at barton hwy/gundaroo rd.

Maybe slip lanes could help or a alternative entry/exit created for crace to barton hwy?

The failure to have built the roads wide enough and necessary infrastructure in the beginning resulted in years of traffic congestion and inconvenience across the Gungahlin district suburbs.

Borderline criminal that it took so long.....

It says it will go up to 80 in the coming weeks, due to planting.

Could be August. This year or next, who knows

Stephen Esdaile, judging by the time they took to build a 2.5km strech, my guess is possibly in 3 years time 😄

Stephen Esdaile when the workers have completed the landscaping etc

It took longer for the ACT gov to duplicate a short stretch of road than for GeoCon to build two 20+ story apartment blocks from bare ground, to fully occupied.

I can only assume the ACT gov didn't put in deadlines with penalty clauses and went on a time and materials contract rather than a performance based contract....

George Frilingos - 2 hours ago
Angelina Mamatas are you still interested? Huge investment. We would need a great business plan, and with people not able to... View
Tiana Jai - 3 hours ago
Dave William got a spare 6mil? View
Kara Youngentob - 4 hours ago
Alison Procter, it depends on how many people interested. Ideally, somewhere in the 750k range. It’s 31 acres so it would b... View
News 30

Lihuan Panda - 2 hours ago
from the conversations and interviews, I think some players chose not to turn up for the briefings and missed out on informat... View
Hugo Walker - 5 hours ago
Penny Ford But isn’t he rich, famous and self-entitled? Surely that should persuade the authorities to cave in to his tantr... View
Pia Kivela - 9 hours ago
Personally we are in a pandemic so we should not be having this tournament View
Property 27

Colleen Alchin - 14 hours ago
This situation is appalling! Forty minutes from the national capital and you need to buy bottled water to drink and wash clot... View
Tegan Gilchrist - 21 hours ago
Amy LD and the clothes!!! Swapped out all out white sheets for greys. Blazer ruined. I now fill up bottles of water from my p... View
Community 1

It’s taking longer for Canberrans to get to work, according to new data

Where the crunch points will be on the region’s roads

@The_RiotACT @The_RiotACT
Looking for a new home you can move straight into? This fully renovated & delightfully styled family home needs no further work and is ready to go https://t.co/YyEAGbNns5 (3 hours ago)

@The_RiotACT @The_RiotACT
A big, green mixed-use development planned for Gungahlin Town Centre may be powered completely by the sun and charge vehicles in the basement https://t.co/JqLOjLL10K (4 hours ago)