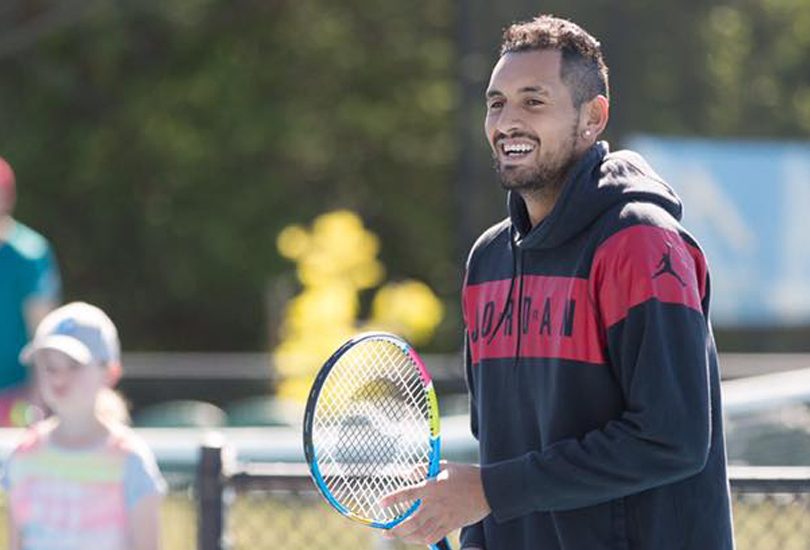 The sight of fans queuing to watch a second-round doubles match along with television ratings going through the roof is surely evidence enough that a tennis revolution is taking place.

Nick Kyrgios, as the band-leader in his doubles combination with Thanasi Kokkinakis, has almost single-handedly pulled tennis into the mass entertainment market at the Australian Open.

Chest pumps, laps of honour, fans drinking from shoes … it is more akin to a mosh pit than the normally demure setting of a Grand Slam doubles match.

I must admit that normally I would not be drawn to watch doubles, but I couldn’t help but switch on the telly to see the Kyrgios-Kokkinakis combination in action.

Kyrgios, of course, has been heading down the path of being the number one entertainer on the tennis circuit for many years as a singles player.

The entertainment value has often been through watching him self-destruct on court. It’s the ultimate in ‘fly on the wall’ reality television.

He’s not the first to take on tennis in this way. Who could forget John McEnroe? He, too, had the capacity to self-combust, making for uncomfortable but compelling viewing.

But Kyrgios’s doubles combination with Kokkinakis is different. There is a greater sense of enjoyment but with a similar foundation of entertainment as the central theme.

Mind you, not everybody is on-board, as was evident in the post-match interview with his second round singles opponent Daniil Medvedev who protested about the behaviour of the crowd. At times the crowd’s jeers resembled the response from the masses to ancient Roman gladiatorial munera at the Colosseum.

You would imagine there are many with the mindset of Medvedev who are more accustomed to the time-honoured traditions of the game of tennis, including a silent and polite crowd.

Sport is facing an interesting period in which it is becoming harder to get people to events, given the television coverage and COVID restrictions.

Ash Barty aside, and it’s difficult not to be drawn in by her wonderful demeanour and talent, tennis, at times, can be robotic and devoid of personality. 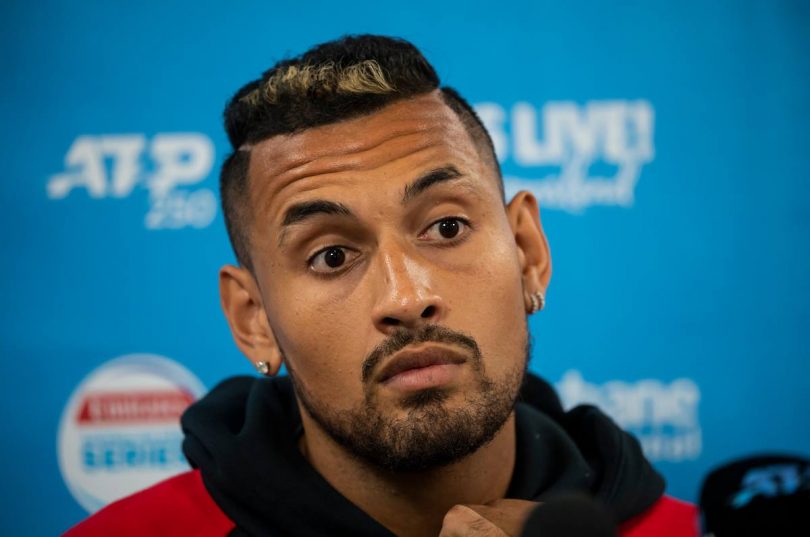 Whatever you think of him, Nick Kyrgios has drawn a new audience to tennis. Nick Kyrgios at the Brisbane International 2019. Photo: File.

Kyrgios pointed out that tennis has done a poor job in accepting personalities in the past and had focused so much of its energy on marketing three players for the last decade – Federer, Nadal and Djokovic – and it has now caught up with them.

With his ranking currently around 115, Kyrgios has attracted as much attention over the past week as the likes of Nadal.

There have been times of frustration at his lack of application, particularly as he has a lot of obvious talent. But with this in mind, perhaps his real calling is as an entertainer.

There is a fine line, though, between tennis as entertainment, where games can resemble a rock concert, and the need to be fair and respectful of opponents and the game itself.

That said, I can’t wait for Wimbledon.

Good on you guys – if doubles tennis is your thing, do it!!! We need positivity in sport and it’s wonderful to see two mates loving the game!

What a pity Canberra has not woken up to the fact that they have 2 champions! Fantastic tennis. Well done lads.

Tim Gavel, you value sport, so why are you writing anything positive or forgiving about someone who has shown time after time that he simply *doesn’t* value in any way the sport which he merely plays at playing?

good at giving but not receiving

☘️Love to see him smile!

The simple answer if you find his behaviour boorish and clownlike is to not watch him. I have restricted my watching sports/ teams with people who have large egos displaying childish behaviour such as the some NRL and AFL teams, (I am looking at you Penrith Panthers) 😉 , international cricketers (you could name a few here), some Australians playing sport overseas (not you Sam Kerr but some basketball players come to mind), overpaid professional golfers etc so as avoid the angst of wasting my time. Some of these people (no matter how philanthropic people perceive these ‘legends’ to be) tend to believe that their sporting prowess gives them the ability to behave how they like. Good luck to them. I won’t be watching them nor do I care. Not that anyone cares but some people are turned off by this. Only their ‘disciples’ who have a similar mind set that fun has to be at the expense of other people and their disciples’ right to be a nuisance come to the defence of their Icon. As for Nick, he will either tone it down and decide what he really wants to achieve in life or eventually burn himself out trying to amuse his current ‘zoo’. This too will pass.

Poster boy for the ‘it’s all about ME’ generation.

He is great player and pretty talented man, but his behaviour over shadow everything and not to mention mode swing, plus acting like a kid. Certainly anger management are calling for kidrous

He is great for the game… work in progress, yes, but does anyone remember a doubles match that exciting and entertaining?

Remember why they are professional sports players – to entertain you… pure and simple.

Are the same haters here also talking about McEnroe? No? Why? – people watched because he has a personality and is entertaining… Nick got it spot on when he states that Tennis needs personalities and the top three are tapioca…….

Bring it on I say – they are there to entertain me, nothing else brings in the money…. He should also take up lawn bowls – that needs sprucing up!

Josh Baker is that you?

Ugh. Still a disrespectful, entitled and whining tantrum throwing brat. Has no consideration, etiquette or manners and makes a mockery out of his opponent. Encourages rudeness and bullying in the crowd. A general, all round bad sport, who is now influencing up and coming young players bad habits and morals.

Jules Anne I whole heartedly agree, his antics are a disgrace and an embarrassment for most Australians

Jules Anne well said. Exactly what he is. Cannot even watch him play tennis.

Love means nothing to tennis people.

I’m loving watching Nick play doubles, he’s such fun and the spoil sport NZ player called him a tool and denigrated for him giving a child his racket after he hit him with a tennis ball. I’m sure people don’t know what Nick does for kids outside his own career including that NZ player

1. Damn, so many haters 2. You forgot Liam Broady complaining too 3. Aus Open should be so happy these guys are drawing crowds – bet it was the most watched doubles quarter final in a while, or, ever – was only supposed to be 50% seats sold but looked quite crowded 4. Watching Kyrgios skulk around the court bouncing back and forth with Kokkinakis… an excellent evening’s entertainment! I say good on em

Many people do not find it entertaining at all, but rather boring, so it’s good to see some fun.

Jennifer Manson then I’d say tennis is not for you

Good on you Nick! I have never met Nick but he is a man who walks the talk! To Grace Capz and all of you armchair knockers out there who probably wouldn’t do anything for anyone, Nick does a tremendous amount of work for charity and underprivileged kids. We need more people like Nick and I am proud he is a Canberran. If I ever see you Nick I will go and shake your hand!

The only calling has been from officials when he swears, abuses line judges and umpires.

I don’t see him changing but if he does I’ll start watching tennis again. I hope advertisers are getting this.

Nothing regular dosing with Ritalin wouldn’t fix. I’d recommend he look at a bit of the history of tennis……but I doubt he reads. He has huge talent and is wasting it away with puerile behaviour. If he can’t respect the traditions of this sport, the chair umpires and his opponents I’d rather he went and played basketball, which he claims is his preferred sport.

Only can win a match with another player hey

Benjammin Murrell I was named after Evonne Goolagong and she has more respect for the game than him !

His social behaviours have moderated somewhat however I would still consider him a work in progress. One of the best point scorers with his Ace serves.

He has such a nice face when he laughs, and looks happy! I wish him every success!

Monica Tiffen no Gran he is gross!

The Special Ks are awesome 👌 👏 👍 😍 💖 Now moved to Rod Laver Arena,
Such is the Vibe ,despite their salty detractors.

Arron Jacob anytime someone upsets the status quo in Australia everyone hates on them. People talk about disrespect and such but forget about McEnroe. Tennis needs personalities and (as it’s been mentioned) he’s brings crowds to doubles matches. Good for the sport.

Alex Nichols McEnroe was called an idiot also and still is to this day. But McEnroe could actually play.

He is a disgrace and an embarrassment to good sportmanship

What jumping in front of the receiver when the server was about to serve – NOT entertainment!

Is he anything else besides a big serve and a big mouth?

Shane Jasprizza I am not a fan of his behaviour on court, however, to give him his due, he does do a lot for charity

Entertainment! Not at the disrespect of your opponents. What it is, is selfindoldent, all about me! Disguised as crowd entertainment. He has single handedly created a crowd that actually boos when the opponent is serving. Nah not for me, not a Nick fan.

Craig Dickenson NOT a boo but a “siuuuuu”. Thank that famous soccer player (Ronaldo) for that and his crazy fans…. Why on earth would a tennis crowd want to follow that stupidity. Don’t think I’ve EVER heard Nick or Thannasi make that useless call-cry….just the fans. But hey, heard the “siuuu” during the Tsitsipas match today. So can’t say they are the ones who egg the crowd on to do it 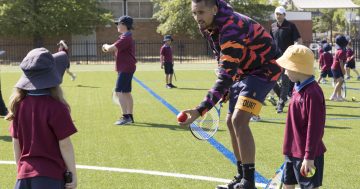