Have you seen this conman? 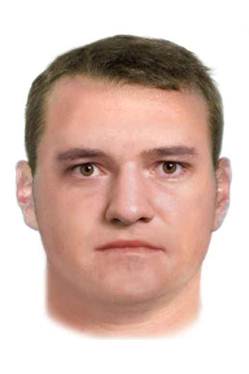 ACT Policing is seeking to identify a man involved in a scam on an elderly woman in January and have released a facefit of the offender.

About 11am on Monday 5 January, an 80-year-old Turner woman was approached by two men at her home.

The woman was told that she needed her roof fixed as it was damaged. Believing the men she attended O’Connor shops and withdrew money.

Upon returning home the woman was told the entire roof needed fixing and would cost $3500.

The men drove the woman to the Commonwealth Bank on London Circuit and she withdrew a sum of cash agreed upon with the men.

On returning home the men stated they were going for lunch and never returned.

The main offender is described of Caucasian appearance, aged in his 30s, approximately 179cm (5’10”) tall and of medium build. He has a fair complexion, light brown hair and an Irish accent.

Police are seeking to identify the male and urge anyone who can identify him or assist police in their investigation to contact Crime Stoppers on 1800 333 000, or via www.act.crimestoppers.com.au. Information can be provided anonymously.

3 Responses to Have you seen this conman?
Filter
Showing only Website comments

Another scam going down is a guy (Kevin) in a white Hi Ace van with Victorian rego WSC 992 selling “home theatres” with a brand name Perilous Audiolab for $1,000.
He hangs around car parks and servos – great talker.
What he is selling is actually a crap audio amplifier (not a receiver) and crap speakers. He claims he is working for Audio Visual Distributors Pty Ltd in Queensland but they have never heard of him.
Plenty of posts on the internet about this mob aptly called “white van scammers”.
The stuff appears to have come from Argentina but it is made in China.
Beware.

He was doing the rounds of Tuggers Bunnings on Monday. His story was he was incorrectly loaded up with seven sound systems, not five, so he had two he could sell off cheaply ( he was waving an invoice around )
I thanked him very much but told him I was given instructions by her indoors to buy some some plants, and that to rock up home with a sound system wouldn’t go over at all well.

Another scam going down is a guy (Kevin) in a white Hi Ace van with Victorian rego WSC 992 selling “home theatres” with a brand name Perilous Audiolab for $1,000.
He hangs around car parks and servos – great talker.
What he is selling is actually a crap audio amplifier (not a receiver) and crap speakers. He claims he is working for Audio Visual Distributors Pty Ltd in Queensland but they have never heard of him.
Plenty of posts on the internet about this mob aptly called “white van scammers”.
The stuff appears to have come from Argentina but it is made in China.
Beware.

Would they be part of the English/Irish mob who come over in our summer and rip off Victorians with dodgy asphalt and roof jobs ?
If so perhaps take a leaf out of the Vic Police who ask around pubs re their whereabouts. They seem to enjoy a drink.

Dony Teller - 2 minutes ago
We just HAD a major fuel load reduction mate (facepalm)... View
Frank Trapani - 12 minutes ago
Steve Hambridge. Why Ask them when we have the environmentalists or the Green?? View
Steve Hambridge - 1 hour ago
Why do we need experts? We can get all of our science from Andrew Bolt and Alan Jones........ View
News 125

Amanda Evans - 10 minutes ago
Craig Elliott I agree. Its bloody ugly and looks like a prison. Where are the gardens? the trees? the amenity? View
Amanda Evans - 11 minutes ago
Meegan Ward with plenty if shade trees! View
Jordyn Gibson - 41 minutes ago
Jessica Musulin great news for next time ANU hosts a major 👀 View
Opinion 37

Daniel Duncan - 15 minutes ago
Both sides do the same thing. The only way we can get rid of them is to vote them out. View
Frank Trapani - 44 minutes ago
Malcolmo Oz. No . What I am saying is; "she has not been charged with anything yet," and until is proven that she's done some... View
Malcolmo Oz - 46 minutes ago
Bethany - +1 on the federal ICAC. However, I wouldn't necessarily pin my hopes on a Labor govt delivering one. It seems that... View
News 10

@The_RiotACT @The_RiotACT
Get ready to eat & drink your way around the world at this year's National Multicultural Festival, which will be headlined by music icon Vanessa Amorosi & former MasterChef winner Adam Liaw https://t.co/h8PWkTS0Jd (30 minutes ago)