Henry Speight signs on for another year in Canberra 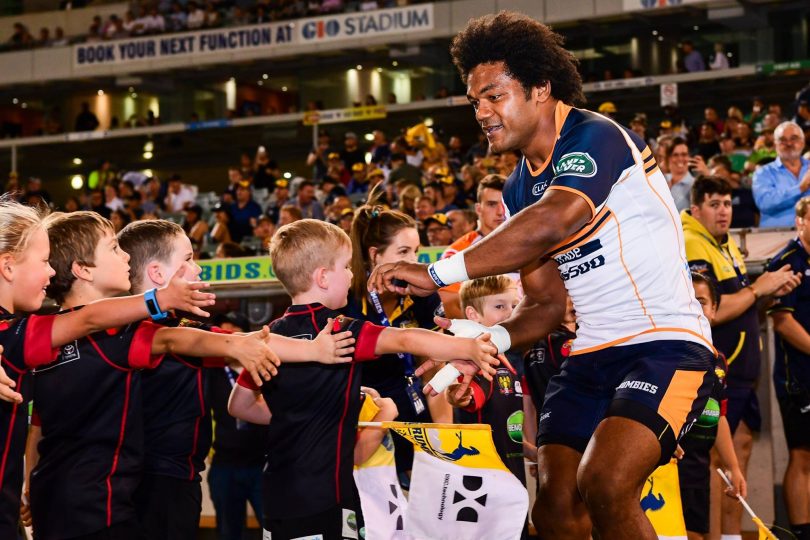 The electric winger has crossed for 35 tries during his Super Rugby career. Photo: Supplied by Brumbies Rugby.

Electric winger Henry Speight has ended months of speculation by extending his contract with the Brumbies for an extra year, which will keep him with the club until the completion of the 2019 Super Rugby season.

The Fijian winger has been one of the Brumbies’ best players this season and will play a key role when they host the Waratahs at GIO Stadium on Saturday night, after scoring tries in the last two games.

Speight, who celebrated his 98th Brumbies cap against the Sharks with a try, is a long-standing fan favourite with the Canberra faithful since he made his debut in 2001 against the Chiefs, after moving to the nation’s capital from New Zealand.

Speight said he was very happy to have extended his contract with the Brumbies for another year and is looking forward to continuing to play in front of the Brumbies supporters.

“This is a wonderful club to play for and I have enjoyed many happy memories with this team. We have a close group of players who all get on well together and I am excited to be a part of the future of the Brumbies.

“The Brumbies are a very special club and is a very well-run organisation. We have some tremendous young talent, alongside some older heads, which is a really good mix and our coaching staff is excellent. I am excited for the challenges ahead.”

Head coach Dan McKellar said the retention of Speight to the roster for 2019 was a welcome boost for the club, who are aiming for consistency on and off the field.

“Henry is a senior player and a very popular member of the club and the Canberra community. He has been at the Brumbies a long time now and is a leader within our group. He is an international winger and is a very dangerous player.”

“Henry is the kind of player who can identify and take an opportunity. He has got good speed, is a powerful footballer and brings a lot of experience to our group in attack and defence,” McKellar said.

“The Brumbies has always been a club that wants to retain the players we have got and, at his best, Henry is a world class winger. This now ensures we have his services here for another couple of years and it’s exciting for us that we have been able to do that.”

The Brumbies will next be in action at GIO Stadium on Saturday the 31st of March when they host old foes the Waratahs. Tickets for this blockbuster match are available from Ticketek, or join the Brumbies family and become a member today.

Ian Pearson - 8 minutes ago
Concur - while Stalin might have said that numbers have a quality of their own, presumably the NCA did not agree. View
Motoring 38

Capital Retro - 9 minutes ago
Being a rugby league player in Gilgandra you would have been inspired by the great Earl Harrison who played group football fo... View
Opinion 19

@The_RiotACT @The_RiotACT
After two years with Region Media, community affairs specialist Michael Weaver reflects on some of the 1700 stories that left a mark https://t.co/a3uA4BsILH (12 minutes ago)