Here's how Canberra's creatives are banding together to combat bushfires 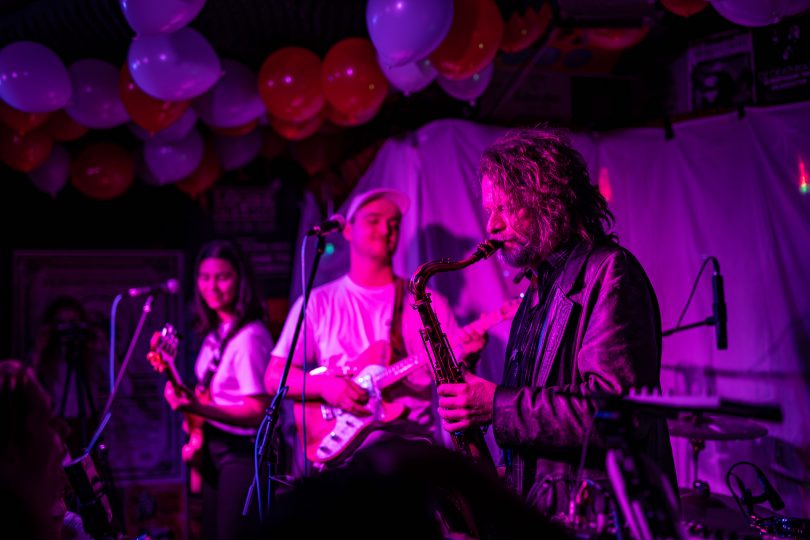 Canberra band ARCHIE is just one of dozens of local acts lending their talents to bushfire appeals this month. Photo: George Tsotsos.

If nothing else, this year’s unprecedented bushfire season has brought Canberra’s creative communities together like never before. With art auctions and benefit concerts popping up left, right and centre, we’ve collected all the city’s creative fundraising activities for you here.

Tributary Projects is hosting an exhibition of local artists with the aim of providing relief to First Nations communities affected by the fires. Head to the opening on Friday, 17 January for drinks, live tunes and tarot readings, and to bid on local works in the silent auction.

Originally envisioned as part of the sold-out Fire Fight concert at The Polo, so enormous was the response from local artists that an entirely separate exhibition was created. The likes of Luke Chiswell, Sophie Dumaresq and Musonga Mbogo join the team of 30 local visual artists putting their work up for silent auction.

Ever thought about getting a tattoo? What better way to follow through on that dream than by snagging a local design for a worthy cause. With artists and flash to be announced soon, keep an eye on Freestyle’s social media for more information as it pops up.

Taking a step over the border into NSW, a host of Canberrans are banding together for an evening of music, art and poetry at The Hive in Queanbeyan. Expect a family-friendly show with sets from Dance-pop artist Endrey, singer-songwriter Cathy Diver, National Folk Festival Youth Ambassador Lucy Sugerman, spoken word poet CJ Bowerbird, and busker Eden Plenty.

Moaning Lisa, Citizen Kay, ARCHIE and Sesame Girl are lending their voices to this once-off fundraiser show at the Polish White Eagle Club in Turner. Even if you didn’t manage to snag tickets to this sold-out event, you can still make a donation through the event page, with all proceeds going to the NSW RFS.

Fiction nightclub is teaming up with world-renowned house DJ/producer Denis Sulta to combat bushfires through the universal medium of dance. If dowing vodka Red Bulls and then hitting the dancefloor is your ideal way of making a difference, rest assured that it’ll all be for a good cause this Friday.

Just one of sideway’s planned fundraising events, this one is set to bring together nine DJs from around the region with proceeds going towards the Australian Red Cross Fire Relief and Recovery appeal as well as First Relief Fund for First Nations Communities.

This show offers punters the opportunity to nominate their own entry fee, with all proceeds being donated to a relevant cause. It’s an important model to keep in mind as the community strives to keep charitability an accessible activity for all. Ginger Nuts, Parotts With Piercings and Moonhowler make up this punk-fuelled lineup.

Vertex Studios in Hume typically plays host to rehearsals and recording sessions. But this Saturday, it’s being taken over by a legion of local bands, throwing open the doors for punters to catch some of the city’s best punk and rock.

An all-star cast of local artists is taking to the stage at the site of many a legendary house show, The Crossroads. Led by dream pop duo Neko Pink, the lineup reads like a who’s-who of Canberra’s underground music scene, also featuring Slow Dial, The Narcissists, Paint Store, Eloria and Ballet Bay.

Mr Wolf will host this all-local, all-excellent lineup later this month, with proceeds from tickets sales heading directly to the RFS. Rapper Jedbrii is set to be joined by multifaceted sound artist Groovy Daughter and funk-rockers Pleased To Jive You.

This positively enormous lineup sports some of the region’s hardest working musicians over two days at the Captain’s Flat Hotel. The Fuellers, Jeff Lang, Los Chavos and Kopasetic are just some of the dozens of acts lending their services to this all-out community fun fest. This one’s family-friendly, with camping options available.

Transit Bar has lineup up a massive show for next month, with The Narcissists, Powder Blue, Swift Peaks, Space Party and Ballet Bay providing a healthy cross-section of rock, electronic music, and pop. With support from Landspeed Records, BentSpoke Brewing Co and a planned live broadcast on 2XX FM, this one will see the Canberra music community coming together in a big way.

Drag Cabaret is hosting their biggest show ever at Smith’s Alternative (AKA Canberra’s living room) later this month. Expect 30 performers, a silent auction and local art, all in the name of raising funds for WIRES and the RFS.

Local post-rock pioneers Lost Coast are donating all proceeds from their online store to WIRES over the next month. That includes sales of their brand new single ‘l’Hermite’, which doesn’t even drop until this Friday. The rest of their catalogue is available as well via their Band Camp page.