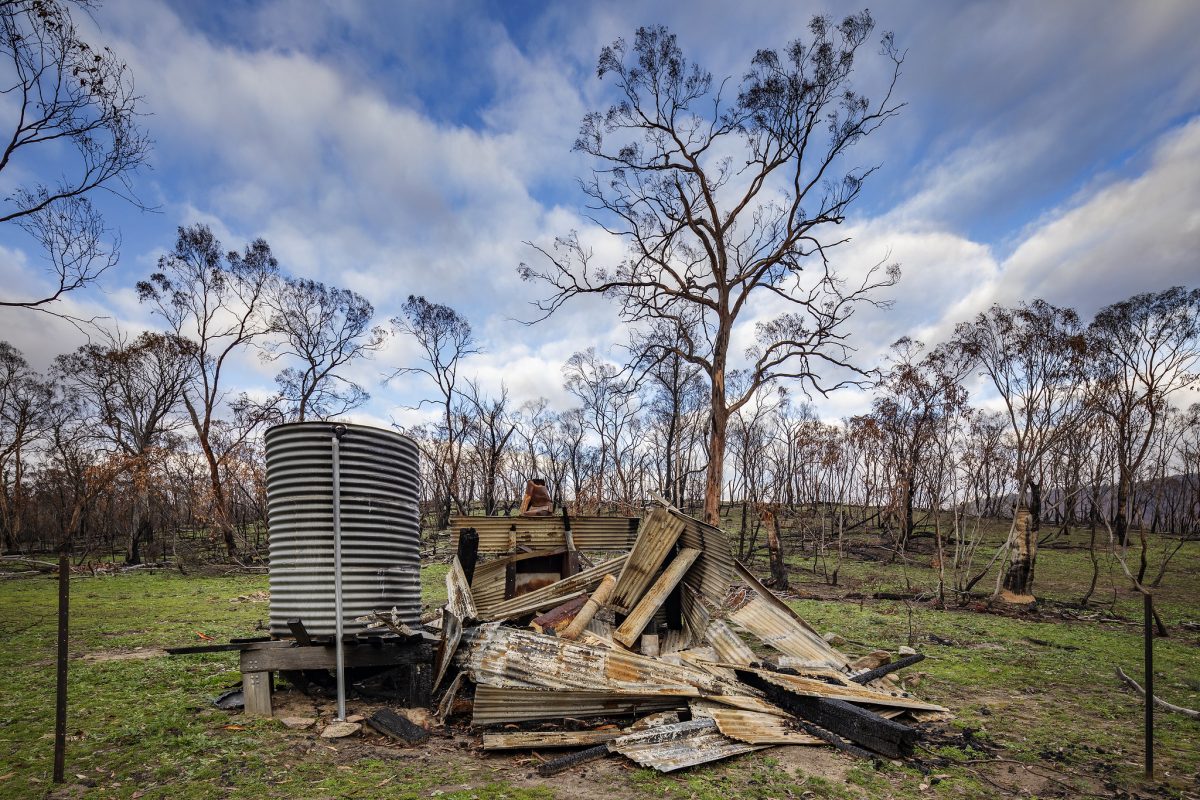 All that remains of Demandering Hut after the 2020 Orroral Valley bushfire. Photo: ACT Government.

The Orroral Valley bushfire burnt more than 80 per cent of Namadgi National Park in January 2020, wreaking devastation on wildlife and vegetation in its wake.

Two heritage-listed stockman huts in the Booth Range area also fell foul of the blaze, both turned into heaps of ash and corrugated iron.

There were in the order of 72 huts and homesteads in the area that became Namadgi National Park by the middle of the 20th century. Demandering Hut and Max and Bert Oldfield’s Hut were only two of 15 still there in 2020.

Both were added to the ACT Heritage Register for their part in one of the ACT’s first industries – sheep rearing. They are described as a “significant cultural resource to the community”, showing graziers’ shelter needs on holdings away from the home property.

The ACT Government was preparing to address termite damage in the huts before the bushfire came through. They’re now asking for community input on a proposal to rebuild them.

Demandering Hut (also known as Curtis’ Hut or Mount Clear Hut) was constructed by Bill Cotter and Jack Simpson in 1945 on the Cotter family’s property, Demandering Run. This leasehold was purchased in 1860 by Jack’s great-grandfather, Garrett Cotter, after whom the Cotter River and surrounding area are named.

From 1956, it became an outstation of the Mount Clear property owned by the Curtis family, and used by the shepherds during the summer movement of sheep. The grazing leases ended in 1979 and the area was absorbed into the Gudgenby Nature Reserve and then Namadgi National Park. 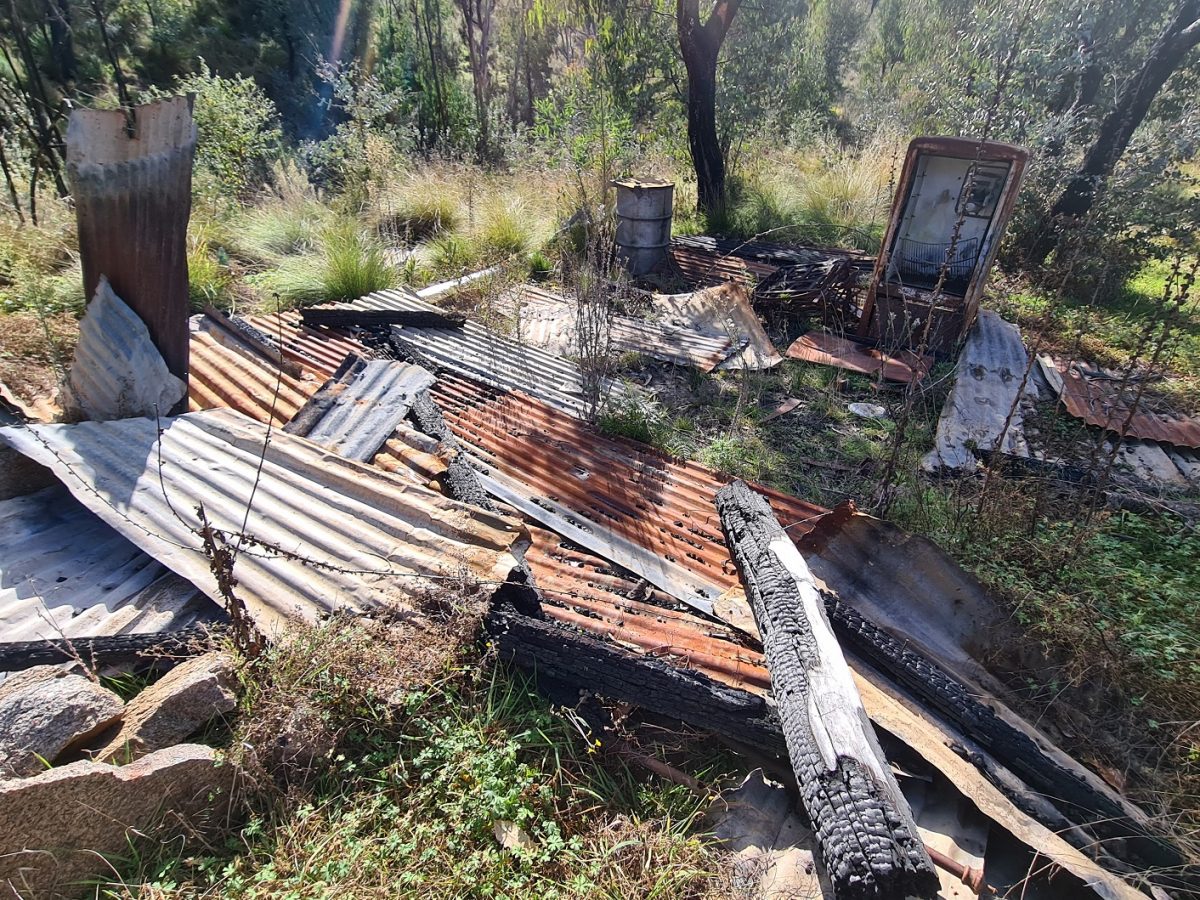 All that remains of the Max and Bert Oldfields Hut after the Orroral Valley bushfire. Photo: ACT Government.

The Kosciuszko Huts Association looks after the hut and has been contacted by the adult daughter and grandson of the Curtis family, who expressed “an enduring connection” with the Demandering Hut.

“They are keen to be involved in the reconstruction, and have a deep emotional connection [to] the hut and site.”

Max and Bert Oldfield’s Hut was built by Max Oldfield and his cousin Bert (Herbert) Oldfield in 1967. Around half of the huts in Namadgi National Park are in some way associated with the Oldfield family.

After consulting the ACT Heritage Council and other stakeholders, the Government is looking to build a new look-alike hut structure near the Demandering Hut site, while partially rebuilding Max and Bert Oldfield’s Hut near its old site.

They will also initiate a ‘Historic Huts Project’, which will conserve the memory of both structures with archival recordings from family members, caretakers and archaeological investigators.

ACT Minister for Heritage Rebecca Vassarotti said both huts were important due to their aesthetic, historic, social and rarity values.

“As well as building two new hut structures, the ACT Government proposes to conserve and commemorate these sites by bringing together family and caretaker site knowledge … to build a single archival record that communicates the story of each original hut.” 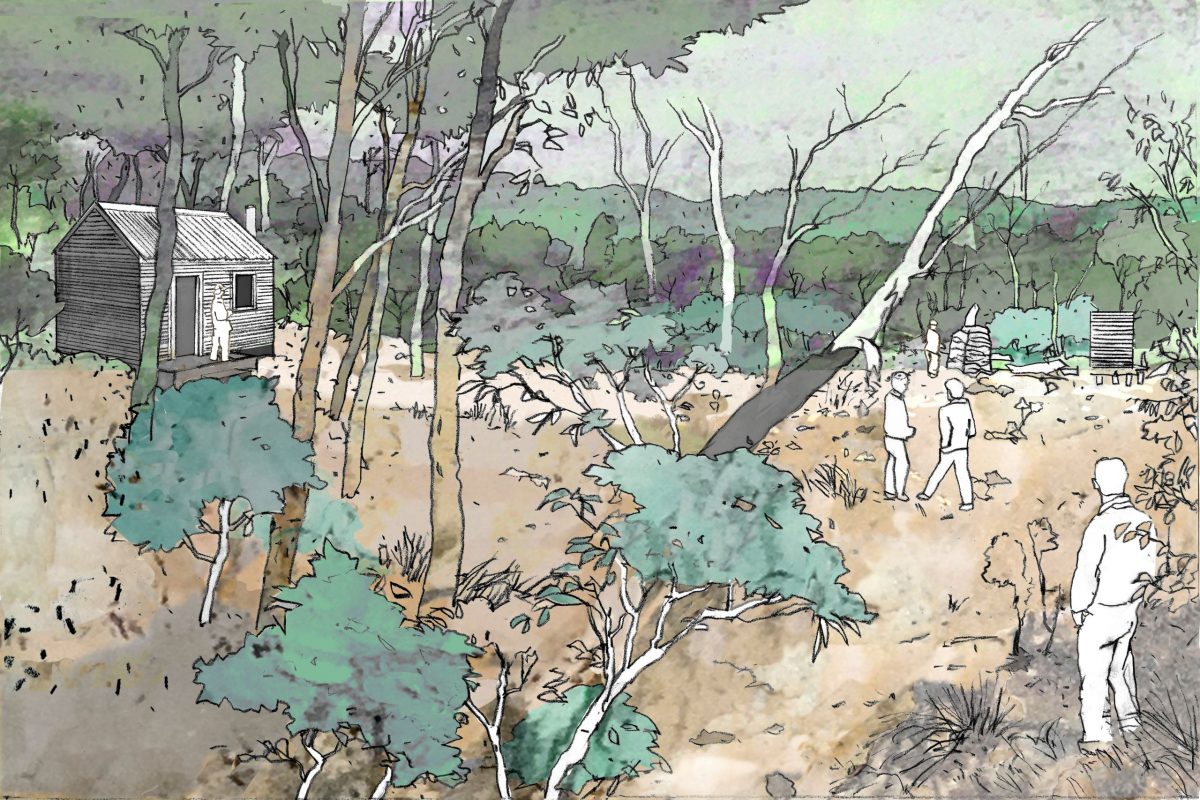 Artist’s impression of the new-look Demandering Hut (left) while the remains of the original remains (right). Photo: ACT Government.

“While the proposed hut structures will respect the originals, we have an opportunity to subtly improve their location, design and construction to reduce fire risk and provide a basic level of emergency shelter for bushwalkers during inclement weather,” he said.

Feedback on the Namadgi National Park Huts Project Proposal is being accepted until 13 February 2023 through the ACT Government’s YourSay Conversations website.

Part of the price for the Max and Bert’s work will be the environmental and actual cost of re- constructing a road steeply uphill to the site. I assume the new building will not be flown in by helicopter, but hope to be proved wrong.

Also, don’t forget, there will be the environmental cost and risk to staff of protecting both of these new government assets from the next big fire.

We would do better to adopt a policy to remember the era of high country grazing without creating new environmental and management costs. Thinks like signage and brass sculptures are less damaging and more bush fire tolerant than new huts. I would prefer to see photos of the REAL structures than to see these new government buildings created and installed by people with a completely different perspective.

And finally, at a more strategic level, there seems to be an extreme imbalance in the amount of attention being paid in Namadgi to the grazing era, compared to either 50 millenia (!) of indigenous heritage or to the millions of years of natural evolution and geomorphology. Nature gets far too little emphasis in Namadgi National Park, just the same as Kosciuszko NP across the border. The short-lived and unsustainable grazing industry destroyed aboriginal culture and did massive harm to stream flows, fluvial geomorphology, and especially biota. There has been an unthinking celebration of that era because it is well known. A challenge for the future is to think again, from first principles, about what the priorities should be.