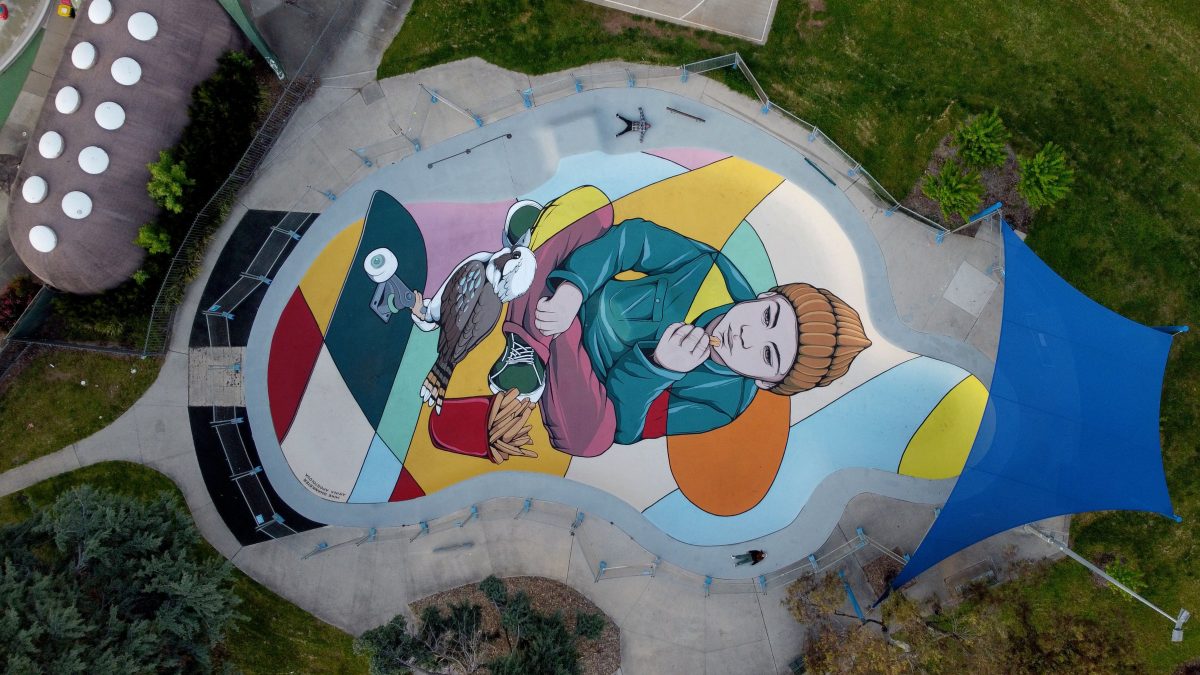 A group of more than 25 young people have picked up their paint brushes and spray cans to transform the Moore Park Skate Bowl into art as part of a Queanbeyan–Palerang Regional Council project.

The mural depicts a child snacking on hot chips at the skatepark beside a visiting kookaburra. It pays tribute to Jack Fardell – a Queanbeyan boy who became an international pro skater – and the region’s fauna.

Funded by the NSW Department of Communities and Justice Youth Opportunities Program, the project involved several workshops hosted by artists Mike Shankster and Arina Apostolova. They worked alongside multiple local youth groups aged between 11 and 25 to create the colourful work.

Some of the young volunteers who helped make the skatepark come to life included those from the Step Up Sisters Aboriginal Girls Group and Clontarf Boys Academy from Karabar High School. In return, they learned a range of skills from consultation to concept design, planning and hands-on work to painting the large-scale mural.

Mike, 37, said it was important to provide projects such as these and engage local youth. “Especially in a smaller community like Queanbeyan,” he said.

“I grew up in Jindabyne where programs like this were not available.

“So it’s been a privilege to work with the Queanbeyan youth and show them that a path in the creative arts is possible.” 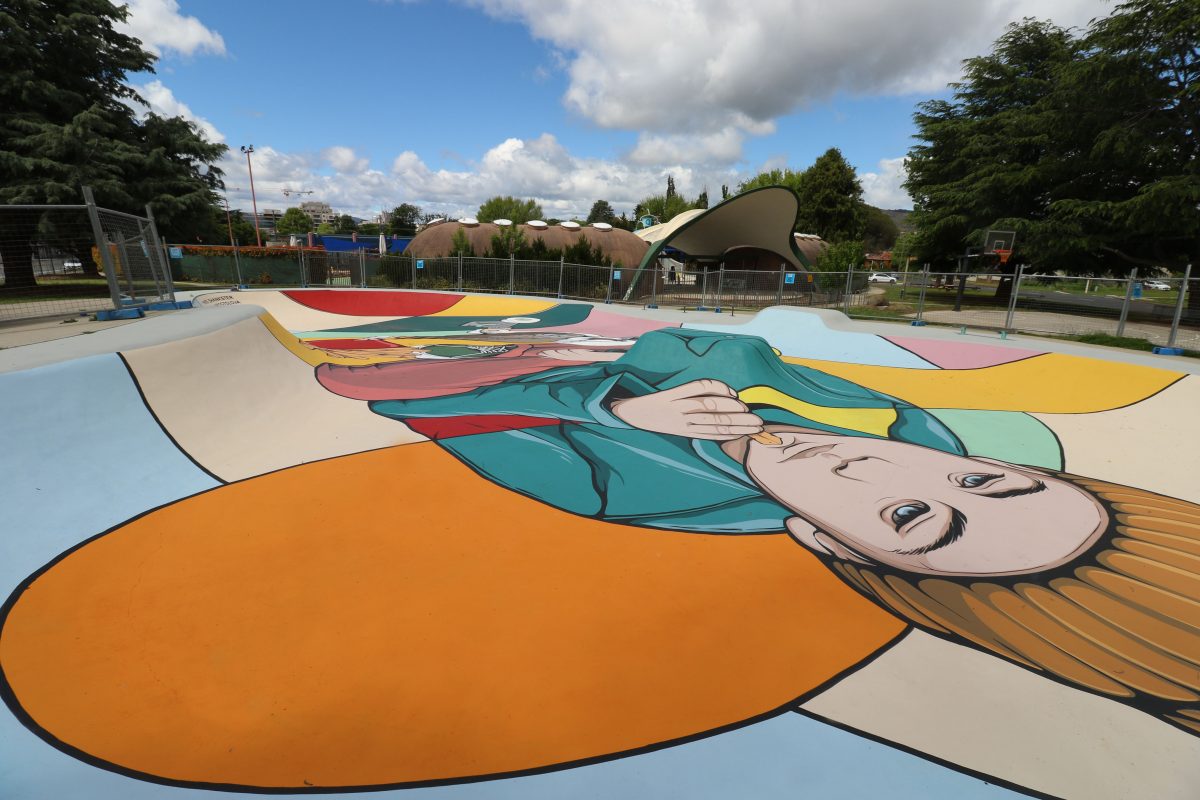 More than 200 litres of paint was used to cover the skatepark (spanning more than 500 metres of the park). Photo: Mike Shankster.

He said the artwork consisted of giant slabs of bold colours to form a huge image of a “common and positive childhood memory that we can all relate to”.

“The project consisted of two initial workshops where we worked with the youth to develop potential ideas,” Mike said. “Then we considered all the various ideas and how they might be applied to the scale, as well as considering the logical issues when painting them.

“On the second day, we developed the concepts further until the final was agreed upon. Students participated in painting the mural the first three days then Arina and I refined and finished the piece.”

The mural was finished on 4 November after two weeks of work. 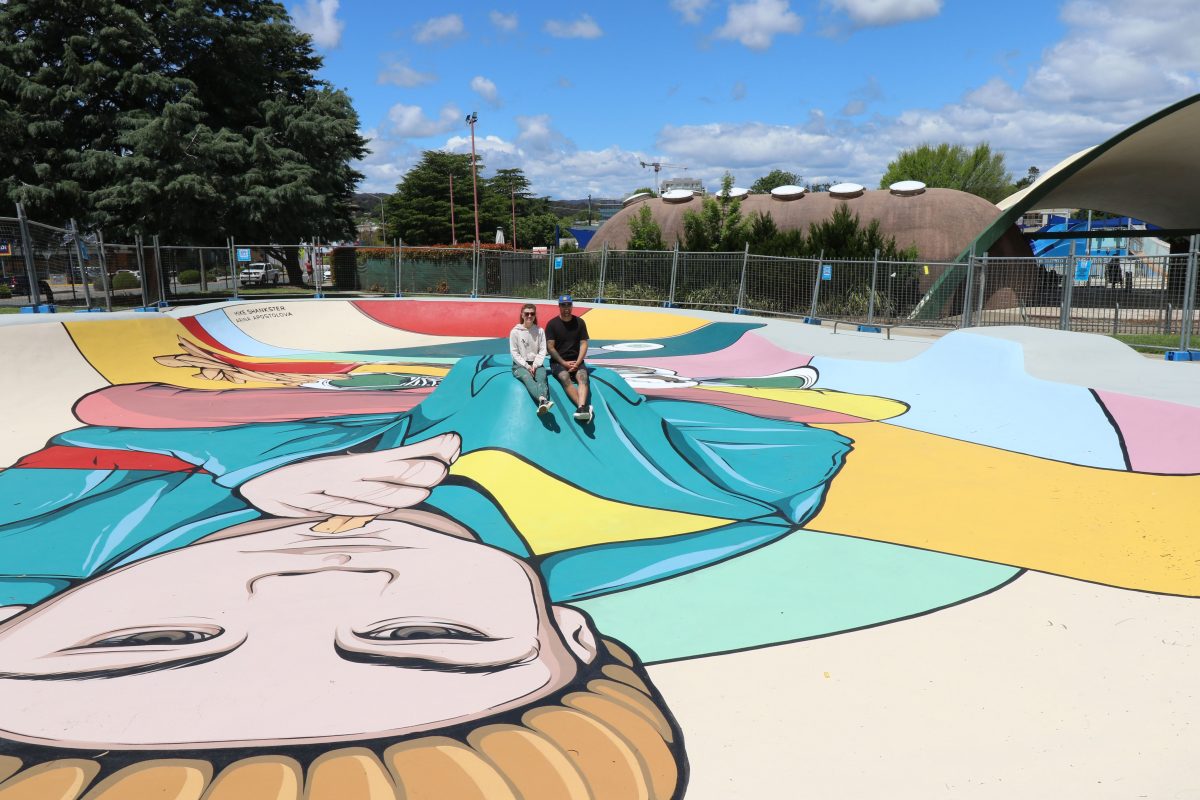 Mike said his passion for art dated back 25 years.

“I love the freedom, the creativity and the opportunities I get, including working with the local youth,” he said.

“It’s such a great feeling seeing your work come together on a scale like this, especially after two weeks of hard work.

“I am now looking for projects similar to this one to create artwork on large-scale skate parks, school pavements and basketball courts.”

Mike said he and Arina’s next project would kick off in Lismore, where they would work with more youth groups.

READ ALSO Not just for kids: The story behind the children’s book exploring our transition to clean energy

Thirty-two-year-old Arina, originally from Odessa in the Ukraine, said she had created large mural works in her home country, China and Australia. But the skatepark mural in Queanbeyan was her biggest to date, and the first time she has painted on the ground.

“It was such a privilege for Mike and me to demonstrate and teach that a career in the arts is possible,” Arina said.

“I think it’s really important to share our knowledge as experienced artists with future generations.

“Having grown up in the Ukraine where these opportunities are not available, I was honestly so impressed by students and their hard work.”

Arina said the mural had attracted many visitors and gained plenty of positive feedback.

“The overall experience of painting the large mural was just great, I have the best memories of the project,” she said.

The Moore Park Skate Bowl mural will be officially unveiled on Monday 5 December with a painting workshop hosted by Mike and Arina, and a demonstration in the park from Back Bone BMX.