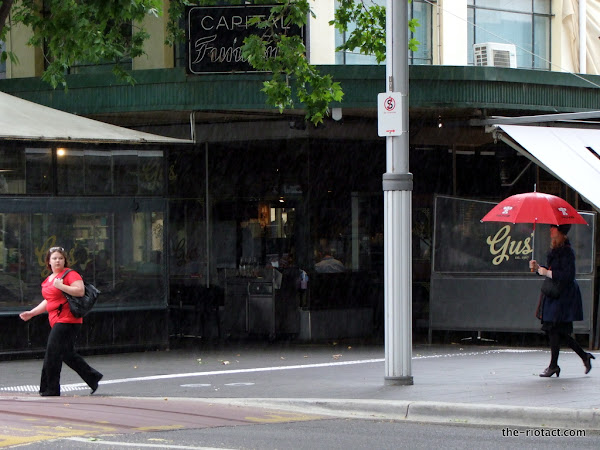 News from the ABC today that Gus’s in Civic has, by some miracle of bureaucracy earned heritage protection status. By miracle, I don’t mean one of the good ones either, but rather a cruel and ironic one. ACT Heritage cites the cafe as a reminder that in Civic, it was once impossible to enjoy coffee outside while “sitting on the pavement.” Yes, there was a time before yuppiedom.

So the heritage listing is based on the business, within the building, the latter being a rather bland, dilapidated structure with an unrelated neon sign on the front.Importantly though, the whole thing looks nothing like it did in 1967. Pavement, seating, signage have all changed. The only original fixture I believe is the espresso machine.

Anyone else confused? What if the business goes out of business, will the new one have to keep the existing (non-original anyway) appearance and name? And does anyone else get the feeling this is a ploy of heritage proponents to stop the expansion of high rise and the Canberra Centre in the area?

A. Gus’ is crap and has been for quite a while
B. The heritage council guy talked as though if it weren’t for Gus’ no-one would be eating/drinking outside..anywhere…ever. Please.
C. Gus’ is crap

I can’t see any logical reason Gus’ Cafe deserves historical protection, regardless of what aspects of the building/outdoor seating area have changed.

For those interested in what it looked like circa ’74 when the outdoor “structure” was built, check this link. (The roof was added soon afterwards.)
http://www.images.act.gov.au/duslibrary/imagesact.nsf/Title/B09AC0EDFECC4CCE4A256B7A000AB792?OpenDocument#

Does any body have a photo from 1967 so we can all appreciate these comments?

Gus’s own website has a photo gallery showing the original premises and surrounding area, along with modern pics to helpfully allow a comparison.

If one were cynical one may suggest that the homestead site is worth countless millions if rezoned as residential.

does the kitchen also get heritage status too?

Yeah this place is definitely a Canberra icon and fought the good fight.

The food and coffee at the place now definitely don’t live up to the hype.

I went to Gus’ on Tuesday to meet with a colleague. Mid afternoon, maybe 10 people in total in the place. Still took them 15 minutes to turn out a couple of flat whites.

The coffee was OK, but the service was crap.

All those fences and barriers and perspex and god-knows-what. I was barely concious of all the hoo ha in the 60s, but it was just metal chairs from memory, and a few tables. No fences, no umbrellas, no silly bloody outdoor heaters either.

Does any body have a photo from 1967 so we can all appreciate these comments?

A. Gus’ is crap and has been for quite a while
B. The heritage council guy talked as though if it weren’t for Gus’ no-one would be eating/drinking outside..anywhere…ever. Please.
C. Gus’ is crap

“the whole thing looks nothing like it did in 1967. Pavement, seating, signage have all changed”

I find this amazing. The Heritage Council recently rejected the Uriarra settlement for exactly those reasons.

Gus (RIP) was an old rogue who frequently underpaid his staff (usually poor Uni students like me) and whose main motivation for outdoor seating was to increase his floorspace without paying for it, while pretending it was all about creating a cosmopolitan city. The dumb bureaucrats he warred with gave him untold dollars worth of free publicity, instead of just charging him a motza. That, he would have responded to.

Anyway, you are quite right to point out that what is there now in no way resembles the establishment they claim to be honouring. Another ACT heritage absurdity, like the story in the Crimes recently about Uriarra Village. 13 years after a heritage bid was lodged, and 8 years after it burned down, heritage approval has finally been refused. Given the Gus’ example, it is ironic that the grounds for refusal were that hardly anything of the original survives to preserve (and that took them 8 years to work out).

Marko Potrebica - 26 minutes ago
What a fantastic idea. Congratulations to the organisers. Thanks you🏁🏁🏁🏁 View
Michelle Ayers - 7 hours ago
Yes please 🙏 View
Alec Millett - 8 hours ago
And not forgetting roundabouts, Adam. 😵‍💫😄 View
News 21

Brendo Collins - 1 hour ago
Maybe cause no one went to this actual facilty it is closing. Maybe if you attended it might still be open. View
Mookie Moo - 3 hours ago
This is so disappointing. I have not used this facility, but I have done weekly aqua aerobics as my main form of physical fit... View
Anne Maree Crowe - 6 hours ago
I feel for these people who have lost their water aerobics classes. Many elderly and people with mobility issues rely on swim... View
Property 16