Hey, I was on Radio National 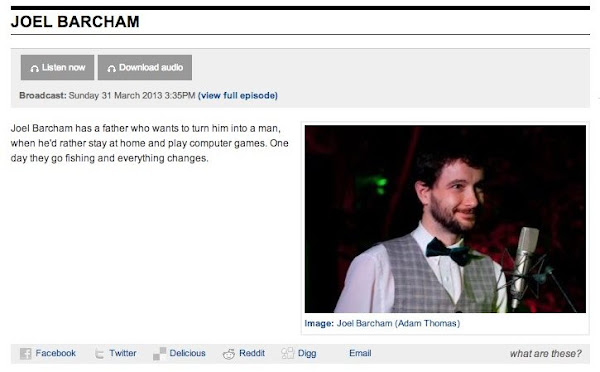 Now Hear This is a fantastic event conceived and run by Melanie Tait where a bunch of people get up and tell a story based on a theme.

During their ‘My First Time’ show last year I jumped up and told a story about the first time I caught a fish. The ABC describes it like this:

Joel Barcham has a father who wants to turn him into a man, when he’d rather stay at home and play computer games. One day they go fishing and everything changes.

My story was played on Radio National over the weekend. I was at the Folkie and missed it, but now it’s on their website so I can have a listen and cringe at how poorly I delivered my tale.

If you too were at Folkie, or were otherwise engaged, and would like to hear about how my poor upper-body strength caused me emotional damage when I was but a boy, you can listen to my story right here.

Yes I am shamelessly self-promoting my lack of masculinity, because there is something wrong with me.

[UPDATED] Johnboy says if I’m going to shamelessly self-promote on the RiotACT, I have to promote him also…

Hey! Did you know Johnboy was on Radio National also? He was talking about Open Journalism, and claiming that the RiotACT was created “largely to prove an ex-girlfriend wrong.”

We’re learning a lot about each other today.

6 Responses to Hey, I was on Radio National
Filter
Showing only Website comments

Joel, please take this as a massive compliment, but you totally look like Kenney Everett in that pic! Could you please do a rendition of Brother Lee Love? Awesome…

Yes – and can we also have Marcel Wave, and Hot Gossip!

BTW, I trust that’s a self-tied bow-tie (which your Dad taught you how to tie), old chap.

Interesting tale there JB junior.Ah well all is not lost for you can still get together with the old man and drink like fish if nothing else!

Hey man, don’t sell yourself short. That was a good yarn, and well delivered. I grinned all through it, and I may have lolled. 🙂

I’m divorced, and I have a young son who’s very very bright, and very funny. I don’t see him as much as I’d like. I’m a bit of a blokey bloke, and he’s not, and that’s entirely OK. I take him bushwalking and shooting and fishing, and he’s OK with that, but I know he’d really rather be at home reading and playing computer games. A couple of weeks ago my wife said “Have you noticed how mini-LSWCHP often leans back like you with his hands behind his head, and how he often closes his eyes like you and scratches the back of his head when he’s thinking about something and how he closes one eye and squints in the bright sunlight like you do…”

It was a good yarn. And I’m glad you get on with your dad and still see him. Be kind to him, eh?

who doesn’t love a good yarn?

Joel, please take this as a massive compliment, but you totally look like Kenney Everett in that pic! Could you please do a rendition of Brother Lee Love? Awesome…

Ha ha yes I heard this on RN the other day. I love the self-deprecating stories on Now Hear This.

May Agnew - 5 hours ago
MOST DEFINITELY -so many homeless -a national DISGRACE -and wealthy developers becoming wealthier still - causing a concrete... View
George Watling - 10 hours ago
A recent OECD review of 300 Urban Planning studies from across the world has demonstrated that increasing the compactness of... View
George Watling - 10 hours ago
This story is not based on evidence or research. Higher density planning policies have been driving up property prices around... View
Community 7

@The_RiotACT @The_RiotACT
More than 1000 Canberrans across six suburbs have been given the opportunity to change the look of their streets as part of a pilot forestry program. What trees would you like to see planted? https://t.co/dP9eU2Q2hq (14 minutes ago)

@The_RiotACT @The_RiotACT
The eight-year legal saga involving Witness K, which shed light on Australia's bugging of Timor Leste in 2004, has come to an end with the former spy sentenced in Canberra yesterday https://t.co/yIT4TW8TlT (24 minutes ago)