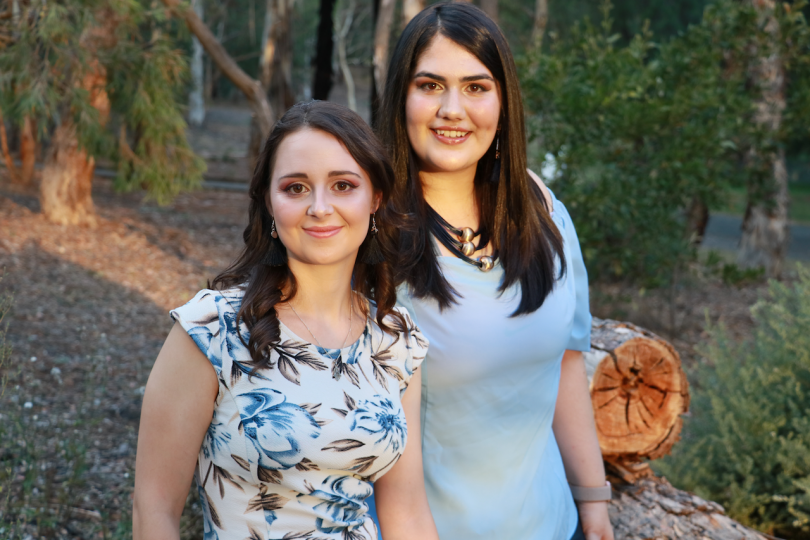 Caitlin Figueiredo realised the world wasn’t fair at a young very age, when her grandparents and parents told her bedtime stories of their lives growing up.

Instead of fairy tales, Figueiredo heard stories about the challenges her family faced growing up in India and Kenya and how they strived to overcome racism and gender inequality.

Figueiredo’s family stories taught her the importance of serving her community and even inspired her to dream of one day becoming Prime Minister of Australia.

The recently crowned 2018 ACT Young Woman of the Year’s passion to bridge the gap between men and women involved in Australian politics led her to forge a partnership with Ashleigh Streeter-Jones, who is the 2018 ACT Woman of the Year.

Together, they created the Girls Takeover Parliament program.

The program is designed to help young women fight for their political rights and to close the “dream gap” for Australian young women and girls while demanding a gender balance in parliament.

In Australia, women hold less than a third of all seats in parliament and fewer than a quarter of ministerial portfolios.

Reaching over 10 million people, Streeter-Jones and Figueiredo secured the involvement of every major political party in the ACT Legislative Assembly and Federal Parliament for their cause.

Their game-changing work was noticed by Forbes, who called them “youthful visionaries” and their program was ranked 10th on the Forbes Asia social entrepreneurs list, beating 2,000 other submissions.

The 22-year-old ANU student always thought she would be able to achieve her dreams until she became older and recognised that a gender gap existed between men and women.

“While on the outskirts it may appear that men and women are equal, once you adopt an intersectional lens, you recognise the ingrained barriers minority groups, in particular, Indigenous women, women of colour and refugees face every day. They often have to work five times as hard for half of the recognition – I am on a mission to change all of that,” Figueiredo said.

Figueiredo wanted to run the Girls Takeover program partly because of the US Elections and her desire not to have Australia follow down the same path.

“As a board director of the Australian Youth Affairs Coalition, the peak body for 4.3 million young Australians, I knew young people did not have a voice in parliament, we could not even get our foot in the door.”

“So if we wanted to drive change and have a say on the issues affecting women and girls, then we needed to disrupt the system and girls takeover did that. Ashleigh and I created our own seats at the table and we never took “no” for an answer. We ended up making history and influenced policy on the local and federal level.”

The two social entrepreneurs first met back in 2015, when Figueiredo and Streeter-Jones where state directors of World Vision for ACT and Victoria, respectively.

The two women worked closely together on campaigns to end child labour and to build a movement of ethical consumerism and increase Australian aid but only started partnering on projects when Streeter-Jones moved to Canberra to complete her Masters in Diplomacy at ANU.

“We’ve worked non-stop to reduce the dream gap facing women and girls both at home and abroad. I brought Ash on to a number of my programs I was already working with because I realised she had many of the skills I lacked. Whilst I was great at coming up with bold and audacious plans, Ash was driven by structure and management strategies. Together we made an unstoppable team and were able to accomplish more in two months than people in similar positions could achieve in a year. I always say that change starts with one, but a movement requires many – and with Ash by my side, we are creating a movement.”

Ms Streeter-Jones said the Forbes award opens up a world of possibilities for their work.

“While we need more women in politics, the voices of young women are almost totally absent, but we’re going to change all of that.”

“It is our hope, that we can use this new platform to grow the impact of Girls Takeover by demanding seats at the political table for young women and in particular women from multicultural and minority backgrounds,” Figueiredo and Streeter-Jones said.

Dan Rayner - 14 hours ago
Katie I had so much practice with you 😂😂😂 View
Katie Licciardo - 14 hours ago
Dan Rayner you love it don’t you View
Andrew Dale - 17 hours ago
Ash Claire dont you know anybody who has had problems with being able to afford to pay their rent. View
News 16

Vera Bachinger - 14 hours ago
So we are going to be the victims of more double dipping.. View
Slobodan Paunovic - 16 hours ago
Marc Edwards don't worry about it, can only be more expensive and some sort of public robbery...they need funds for parties a... View
Tom Adam - 18 hours ago
Jorge, yes I was basing my comments on the current claim. View
Opinion 19

Christie Le Goy - 14 hours ago
George Prasad hooray for you, no wonder you're such a gorgeous family xxxx View
Motoring 37