How can we vote knowing so little of candidates?

Perhaps three weeks out is too early but the electors haven’t heard much from the 141 people seeking our vote in the ACT Assembly election. Maybe we will be inundated with revealing information soon.

OK, there are plenty of corflutes around the neighbourhood and our letterboxes despite No Junk Mail instructions (election campaign material could not possibly be junk!) are the target of local aspirants. Some candidates even doorknock prospective voters.

Nevertheless most of us do not know enough about the individuals standing to cast a considered vote.

Most of the tried and true methods of reaching the electorate mentioned above are available only to the major parties who have the resources to engage, but even their candidates cannot reach everybody. Name recognition and a face is the best to be achieved, better than the virtual anonymity of a name on a ballot paper (the fate of many others), but still short of finding out more about the actual person.

Certainly we know something about their individual commendable background but not their political beliefs and particular interests. These are the Party’s preserve and their candidates sign up like a unity ticket in support. This is not to suggest pre-selected Party candidates should be promoting their own ideas, but it would be informative to learn if their special commitment was say education or law reform or whatever.

As it is, it’s like a package and you pick people in the order you prefer based upon a rather shallow assessment. Even public meetings do not do much to educate.

A chorus of candidates restricted in what they can say by time limits and usually with only one per Party to answer a question. Maybe 100-150 political tragics in the audience and most attention upon sitting MLAs, not new chums.

The media does not help or perhaps it is Party tactics, but most policy announcements seem to be made by the leaders or deputies. Smaller groups or independents often appear to be reduced to silly stunts or outrageous promises to gain attention.

We are not assisted in getting to know all of the candidates, an average of 28 per electorate, by the increase in the Assembly’s size, nevertheless it is a pity printed thumbnail sketches at best only can reveal our future decision makers and perhaps their policies. Worse, even with this limited opportunity how many voters will read them?

This is the dilemma every candidate faces: how to reach apathetic voters.

With no sure way of involving all of the community in exercising its democratic right and responsibility, we can only seek to help the process using the old approach to the national census.

A list of candidates in each electorate complete with personal details, Party affiliation if any and specific interests in government should be sent to every household. This would not preclude the other usual campaign activities but it would ensure all voters were reached and a more level playing field created for smaller groups and individuals. 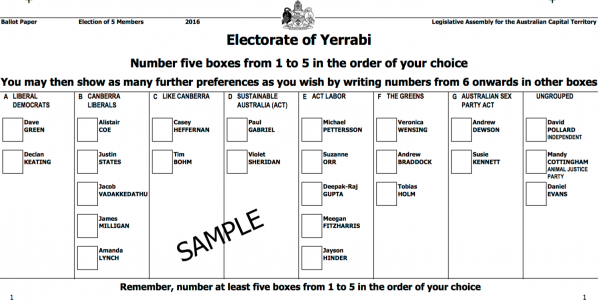 9 Responses to How can we vote knowing so little of candidates?
Filter
Showing only Website comments

Average voter will usually vote the way their parents did

“A list of candidates in each electorate complete with personal details, Party affiliation if any and specific interests in government should be sent to every household. “

Not a bad idea, Greg. But we need to completely eliminate the principle that whoever has the most bucks wins and replace it with a battle of ideas.

Who needs 141 candidates? Just have two boxes on the ballot marked “Tram” and “No Tram”. It’d make the voting and counting that much easier.

To find declared candidates for Light Rail look up

For anti candidates look at

We would all like to know more about the candidates, particularly if there are good reasons to vote against them.

But there is the problem of defamation law.

My partner worked with one particular major party candidate for a number of years and knew him to be particularly lazy, dim-witted, self-seeking and vain.

Unfortunately she is not a supporter of the party he is standing for. Neither is she in his electorate.

I have suggested she post along the following lines: “I have worked with X for a number of years and would recommend voters place him last in the order of his party’s candidates.”

After living in NSW I find it a strange system here in Canberra.

What’s the system in NSW? Any standout pros and cons?

I agree it is difficult to choose if we don’t know who they are. All very well meet and greet in shopping centres or door knocking but still no wiser about the person or party policies. After living in NSW I find it a strange system here in Canberra.

Who needs 141 candidates? Just have two boxes on the ballot marked “Tram” and “No Tram”. It’d make the voting and counting that much easier.

Judge a candidate on past actions, not embellished profiles, temporary promises, hidden agendas and party propaganda.

I assess a candidate on what they have actually done in the community for the last four years and ignore those promising what they think I want to hear in order to get themselves elected.

If I haven’t seen them active in my community then they can’t be trusted to represent my community.

Where’s ClueyVoter when you want it?

Samuel Gordon-Stewart - 26 minutes ago
It should be noted that 2CA is not, as described in the article, a commercial talk station. It is a music station. 2CC is cor... View
Nicholas Love - 3 hours ago
Chris Olsen I appear to be the person that listens to 2ca? Not many in my age bracket it would seem 😎 View
Kat Rothwell - 4 hours ago
Y'all just beige View
Opinion 61

Sam McCracken - 1 hour ago
Betty Meiksa I didn’t get that feeling at all from Jennifer’s comment. She’s saying that you should continue your tenan... View
B-rad McDonell - 1 hour ago
Housing should be a base human right. There’s zero reason we shouldn’t have basic public housing available to all that ne... View
Ruth Donnellan - 2 hours ago
Kerry Crampton the police can't force people out of properties, only if they've been evicted and don't leave. View
Food & Wine 46