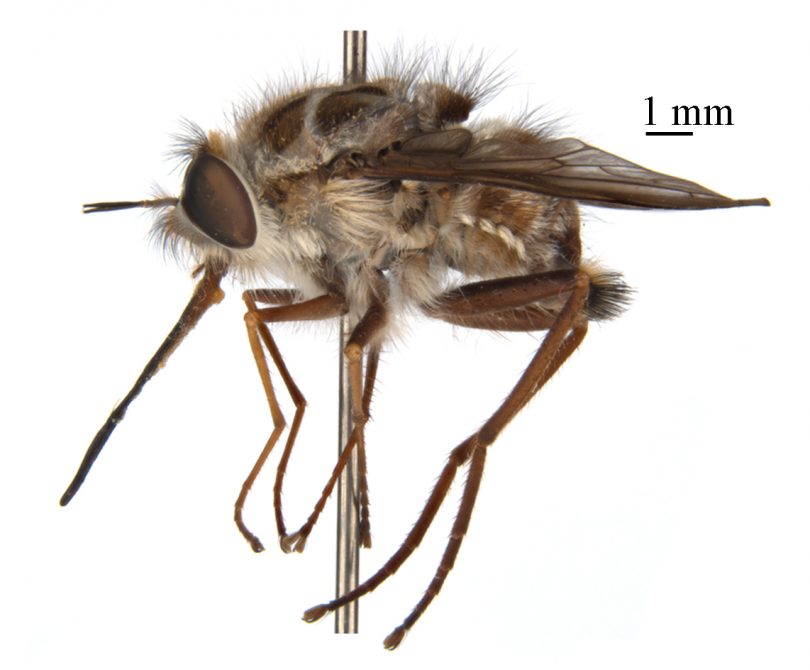 Canberra PhD student Xuankun Li named a bee fly after the Game of Thrones’ Night King because it reigns in winter and has a crown of spine-like hairs. Photos: CSIRO.

Have you ever wanted to name a species? According to Canberra scientist ‘Bry the Fly Guy’ (aka Bryan Lessard), it’s the “most fun a taxonomist can have”!

And it sounds like there’s been some fun to be had lately with the Canberra-headquartered CSIRO naming 230 new species during the past year.

Just one of those was a bee fly named Paramonovius nightking after the Game of Thrones’ Night King because it reigns in winter and has a crown of spine-like hairs. 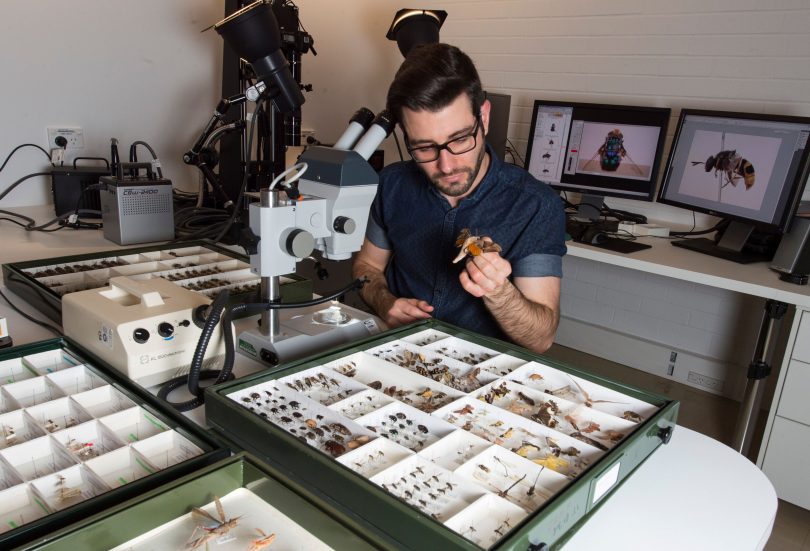 Canberra scientist ‘Bry the Fly Guy’ (aka Bryan Lessard) from the CSIRO has recently named two soldier flies and says it is a lot of fun but also has a serious side.

Dr Lessard, who is an entomologist at the CSIRO’s National Research Collections Australia, said that despite the fun involved, naming a new species also has a serious side.

This is because a species without a scientific name is invisible to science and conservation and Australia has only named 20-25 per cent of its half a million species.

“Scientists across the country name around 1000 new species each year. At the current rate it will take another 350 years just to know what exists,” Dr Lessard said.

“Australia needs a step change in biodiversity discovery and at CSIRO we’re pulling together many strands of science to deliver that.

“We’re using AI, machine learning, genomics, digitisation and big data informatics to change the way we use the 15 million specimens in our research collections.”

Dr Lessard said the driver of this action is the value of Australia’s biodiversity and its benefits.

“Our biodiversity runs the planet. It cycles nutrients, sequesters carbon, pollinates crops and cleans the air we breathe and the water we drink. We literally couldn’t live without it,” Dr Lessard said.

He said that Australia’s native plants and animals directly support billions of dollars of industries such as fisheries and forestry. They are rich sources of germplasm for crops like cotton, soybean and macadamias and can be explored to find useful new bioactive molecules and novel materials.

“Native plants and animals are of deep cultural significance to Indigenous communities and simply being out in nature has many health benefits,” Dr Lessard said.

One of the groups Dr Lessard studies, soldier flies, has an estimated 300 Australian species but only 150 of them have names.

Like many insects, some undescribed soldier fly species have waited in the insect collection for decades for a taxonomist to describe and name them so they can be formally recognised.

“One of the soldier flies I named is from Chillagoe in Queensland,” Dr Lessard said.

“It’s so different from other Australian soldier flies that it belongs to a new genus, which is the next level up from species.

“I named it Scutellumina parvatra – that means little black fly with no shoulder spines.” 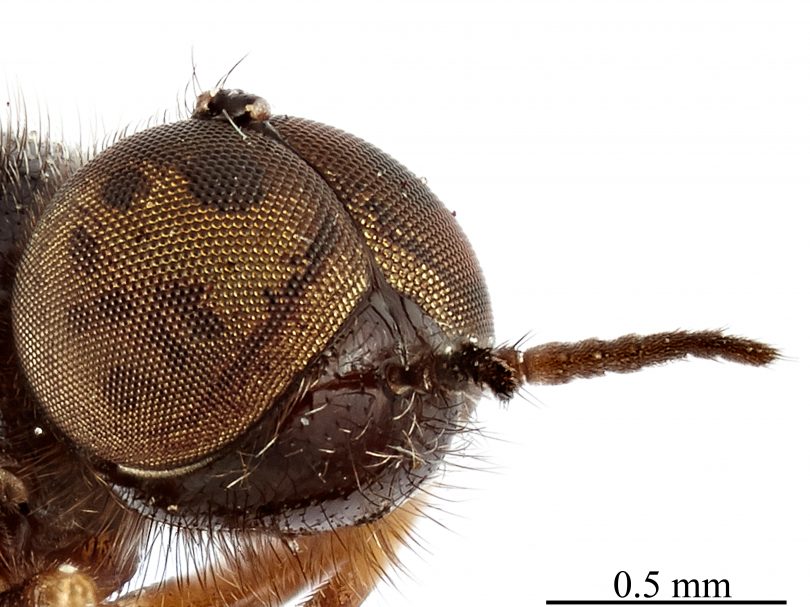 The scientific name has to be unique for each species and is made up of both a genus name, which comes first, and a species name.

Along with the new insect and fish species, staff of the Australian National Herbarium have named six new plants species, including two daisies, two orchids, a lobelia and a trumpet vine.

The next generation of taxonomist is also getting involved in the name game.

“Xuankun Li, who named the bee fly Paramonovius nightking, is a PhD student at CSIRO and a huge fan of Game of Thrones, proving that inspiration for new species’ names can come from anywhere,” Dr Lessard said.

Geoff Richardson - 13 minutes ago
Jack Hearps It was going on in the 90's with both Labor and LNP governments. Nothing new! View
Guy Manton - 40 minutes ago
Jay Kay pretty much the same across most of the proffesional fields. There needs to be a complete overhaul of the salary and... View
Liam O'Toole - 56 minutes ago
He's right. But the APS can't attract the skills it needs. It relies on contractors simple because people have realized they... View
News 132

Amy Clark - 40 minutes ago
Kirstin Maree we’ve (well Anthony) has been doing our nature strips and down along the walkway and next doors for a while n... View
Brian Kilgannon - 45 minutes ago
Rachel Greene Thats not really difficult to do. Other places do it so why not Canberra? View
Rachel Greene - 48 minutes ago
Brian Kilgannon not resistance....its just not as simple as hiring more staff...they need more mowers and at over a $10000 ea... View
News 16

Dan Cope - 2 hours ago
👏 well done Emma. View
Alexandra Mary - 2 hours ago
Jaimie-Lee Peattie it is! So awesome to see more being set up View
Montana ONeill - 3 hours ago
This is good to see and hopefully it grows throughout the region to other areas💙 View
Lifestyle 5

Tracy Noble - 2 hours ago
Oh my goodness! Squealllll! 🥰 View
Joe Logue - 2 hours ago
keep the noise down am up sharp in the morning View
Nicky State - 4 hours ago
Congratulations Jarrad! 😍😍 🎭 View
Opinion 51

Capital Retro - 5 hours ago
It was reported this morning that on some international flights into Paris, 10% of the passengers had tested positive for the... View
Futureproof - 6 hours ago
International arrivals = lockdowns, rinse and repeat. There's a lesson there, but no one seems to have learnt a thing... View
Breaking 2

Acton - 5 hours ago
Bats carry desease, shriek incessantly, spread fleas, stink, excrete copiously, but have been allowed to take over part of Co... View
show more show less
*Results are based on activity within last 7 days

With rain comes growth - and while no one would argue this is a bad thing, many agree it is...
Opinion 51

@the_riotact @The_RiotACT
In its day, the Gundaroo Wine Bar was the place to go in the village - and not just because it was the only place open. It was the #heart of the #community, thanks to the legendary hospitality of Matt, Beat and Kay Crowe https://t.co/fI1oW7BsAA (32 minutes ago)

@the_riotact @The_RiotACT
We've got all the hot news in this week's newsletter - from hot property, to hot-desking. Subscribe now! https://t.co/nl4QFZTDQW (2 hours ago)