Experts in buying, selling & renting
Your property, your future
13 September 2021

How far would you go to chase down your missing package? 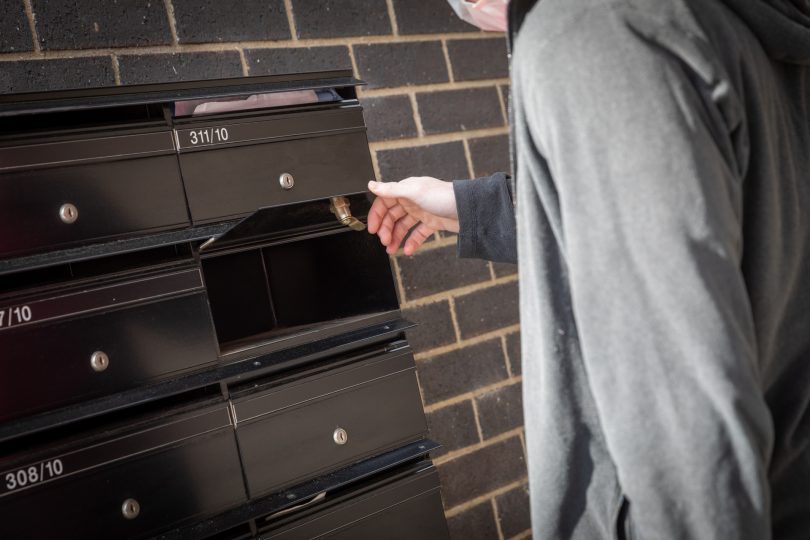 Opening an empty mailbox wasn’t quite what Tanya Wright was hoping for. Photo: Michelle Kroll.

When a package goes missing, it’s a pain.

When a package with sentimental value goes missing, it’s painful.

Palmerston woman Tanya Wright knows this feeling well. Since July – before the ACT was in COVID-19 lockdown – she has been expecting a package from her mother-in-law who lives in Hervey Bay, Queensland.

In the package is a handmade cardigan, a red beanie, a library bag with a dinosaur sewn on it, and some hand towels.

It should have been delivered on Thursday, 15 July.

Since then, Tanya has been on a mission to track down the items.

There have been phone calls, hours sitting on hold to various agencies, Facebook posts, tracking down people who think they might know something, letterbox dropping, and learning more about how packages are delivered than she thought she’d ever need to know. 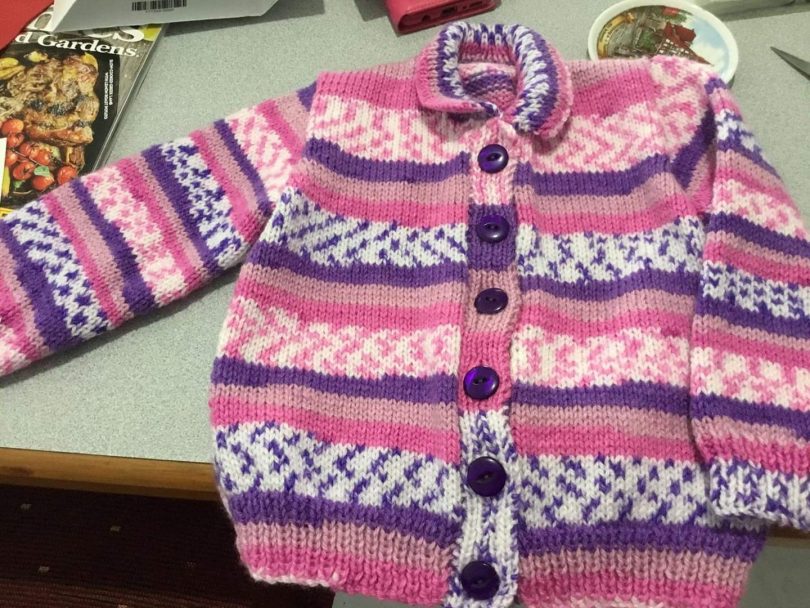 This is the hand-knitted cardigan that should have been delivered to Tanya’s family in Palmerston. Photo: Tanya Wright.

There have been hours spent learning about how many of her street names there are in Australia (there’s no others within Canberra, or within 100km of the ACT, in case you’re interested).

While there is a Palmerston in the Northern Territory, she is 100 per cent sure it didn’t end up there.

Tanya says she has exhausted pretty much all of her avenues. The last place the package has been tracked to is a GPS location near her home in Palmerston, but there isn’t a delivery photo to verify this.

She thinks it may have mistakenly ended up with a neighbour or another house in her suburb because her home recording system shows it wasn’t delivered to her own house.

“It’s a system that only records if there is movement or if someone rings the bell,” explains Tanya.

She’s been around to ask those neighbours closest to her and is now pleading with the wider community to “double-check your letterboxes, your houses, check in with your neighbours, friends and family”.

Some of the wackier theories she’s come across on Facebook include a warehouse in regional NSW that’s meant to be full of stolen packages.

Right now, Tanya isn’t concerned about who has got it, why they have it or why they might not yet have returned it.

“I have a four-year-old asking every day where his package is, and a one-year-old who I can’t dress in her ‘cardi’,” she says.

“I can’t even send my mother-in-law photos of the kids with their gifts from gran to proudly share among her friends.”

The hand towels were meant to have been Tanya’s birthday present.

She’s even offering a $100 reward for anyone who might be able to locate the package.

So far, the community response has been incredible, says Tanya. People have offered to knit her a cardigan just like the one the family is missing, and chip in for the reward.

“We aren’t going to take up any of these offers though because we count ourselves among the lucky ones with a roof over our head and we are able to pay the bills,” she says.

READ ALSO Nazmul Hasan is delivering free, hot halal meals to those in need this lockdown

In a statement to Region Media, an Australia Post spokesperson acknowledged the challenges of current circumstances, in which record volumes of parcels are being delivered.

The current protocol for delivering parcels dictates that posties and drivers knock at someone’s door three times and call out before leaving a card or safe-dropping a parcel.

The spokesperson said that reasons for a card being left without knocking would be access or safety issues, “such as an off-leash dog – and this could happen even when a customer is home”.

Customers are encouraged by Australia Post to download their mobile app which provides an option to have parcels left in a safe place.

If an item is incorrectly addressed or is unclaimed at the post office and can’t be returned to its sender, it is sent to a mail redistribution centre where it is opened, catalogued and stored for two months, during which time the customer service team will try to connect mail to customers.

If the two-month retention period lapses and the item hasn’t been claimed, all identifying markings are removed and the item will be auctioned, with 100 per cent of the proceeds donated to charity.

I complained and the retailer sent a replacement. About 6 months later I found the original parcel pretty much buried under a big bush in the garden.

Try the Nextdoor app. A few stray deliveries have been posted there.

I lost a parcel once…I tracked and rang the depot of its entire route and eventually it was declared stolen from the depot but at least I made them accountable and took it to management, I wouldn’t get off the phone until they talked to me. I even had them check cameras at the depots to track the driver you just need to act like the FBI hope they find the parcel.

I bought an ebay item recently that required signature on delivery so I redirected it to a parcel locker at Dickson post office through the Australia Post app.
Fyshwick depot seems to have returned it to the vendor because the redirected parcel locker at Dickson was different to the address on the package.
AP systems are full of holes where one hand does not know what the other is doing.

So many mistakes by delivery drivers but we are so lucky that the majority of Canberrans are so honest that they take it upon themselves to make sure the right person gets it . Australia Post take notice !!!!!

I’ve twice this year had cards delivered here at 78 when they were supposed to be 18. German/Dutch 1 looking too much like a 7 for our Postie. First time I knocked on 18’s door to make sure it was them. 2nd time I just dropped in their mailbox.

I will still hold Aus Post a little ahead of the USPS in America. A parcel sent to me from the U.S. East coast, clearly and properly addressed, was sent to Austria.
They sent it back.
So the imaginative types in the USA found a town similar to where I lived (not in Canberra at the time) ….. in Ireland.
Maybe someone in the Irish PO knew someone in Australia, because rather than sending it back they moved it directly here.
Only about three months in all.

We’re still trying to contact Australia post about my son’s 18th birthday gifts. I have the claim number from his grandfather, and the tracking number but the auspost system is completely automated and it keeps telling me to contact the sender. It’s sitting somewhere at the Fyshwick depot, but in lockdown evidently we can’t go there. And can’t call them. Sent emails and no response.

Nicole Baxter thanks. Will give it a try.

Over the years I have had 3 parcels left for me that were not mine. Have delivered them to their rightful homes. Usually the street number is wrong. e.g one was for 19 not 9. Such a simple mistake! Good luck.

Safer sometimes just to get a parcel box , one time I got 3 parcels in 3 different lockers . Has only been 1 time no lockers available . Great idea and free to use

Anything valuable, I pay for insurance. and a signature.. with AP. It’s well worth it…

Judith and use a parcel locker. They’re free.

Awol Wallis I think if you actually pay for insurance (I recently paid an extra $20) and required a signature. It is expensive, but what are sentimental items worth ?? I think Aust. Post are pretty careful if you pay enough money…

Jasper Roo Yes, the expensive parcel I sent recently went to a Post Office parcel locker. Went from Canberra to Melbourne in about 2 days.

Have had two deliveries last week not belonging to me.Drivers need to pay more attention to details

Australia Post is unfortunately no longer a reliable deliverer of parcels to residential addresses. In many cases delivery is not even attempted, as CCTV proves in this case. Cards are not left. The problem is worse if it is raining. Mind you Amazon and other couriers are no better. Post Office “Parcel Collect” works.

You aren’t wrong there. I’ve had Australia post send a parcel back to an international sender, stating that my address doesn’t exist (they obviously didn’t look very hard).
I managed to have it intercepted in Sydney, only to have the guy in the parcel office tell me that maybe the delivery driver didn’t know where Queanbeyan was.

The large majority of Amazon parcels are handled by Australia Post….

The use of contractors for parcels means service delivery quality varies wildly – we have a magnificent guy at the moment here in our suburb – always rings the bell, always leaves parcels inside the secure front door (apartment building) if he can rather then carding, always super polite.

He had someone else helping out the other week however due to massive volume – complete opposite. 3 times had to go to post office to pick parcels up, when every time we were at home and he didn’t ring the bell.