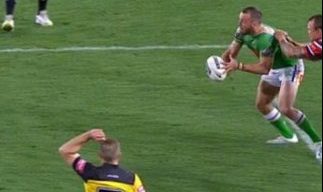 It was the moment that left many puzzled. Players turned to Ben Cummins for an explanation, but there was none forthcoming.

Mere seconds after signalling six again, the referees changed their mind and the ball was handed to the Roosters. The Roosters scored off the next set with fullback James Tedesco diving underneath the posts.

Social media erupted as journalists, athletes, celebrities and fans expressed their anger and disbelief. Here is a sample of how the world reacted to the controversy:

How much did the Roosters win by?

Just checking that Jack Wighton is still the Clive Churchill winner and they didn’t change their mind again? ????#NRLGF

For years, critics have asked "what if that happens in a grand final?" Tonight, we had that grand final. #NRLGF

Absolute joke @nrl
Your refs have ruined this game!!! What an absolute joke!!!

This is a joke. What a circus act. #NRLGrandFinal

Not into ref bashing. But that is one of the worst calls in history. You can't change your mind. It's criminal for the Raiders #nrlgf

I don’t mind getting beaten if it is fair and square. That wasn’t! #fnrefs

I'm a neutral (baracking for a Canberra win) and I'm seething with rage.

That could go down, no exaggeration, as one of the biggest refereeing howlers in Australian sport.#NRLGF

“Excuse me, 000, I’d like to report a robbery at ANZ Stadium. The thieves were a trainer and a referee.” #NRLGF #NRLGrandFinal 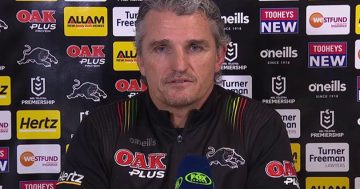