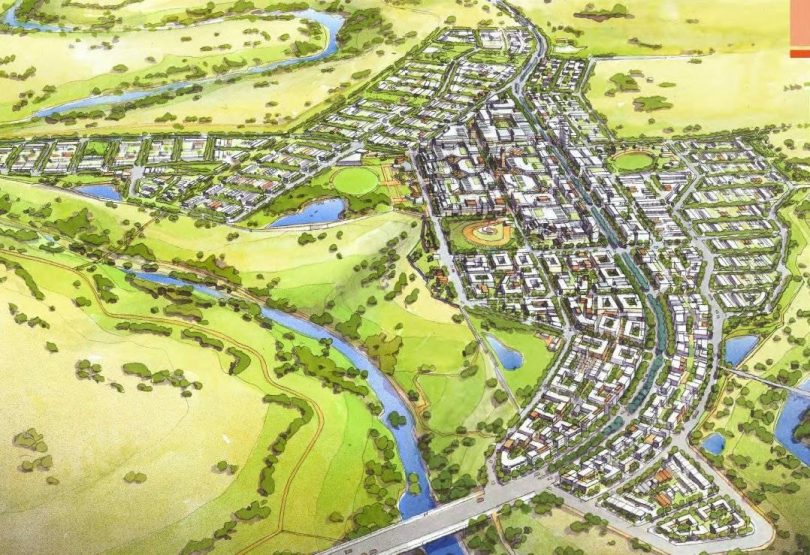 Planning for Canberra’s first gas-free, all electric town centre is underway with a consultant hired to advise the Suburban Land Agency on building the suburb and how to help its occupants adapt their business operations to that environment.

The Molonglo Commercial Centre in the Molonglo Valley will be the heart of the emerging district and will accommodate commercial, retail, residential and community facilities.

The Labor Party promised to fast-track development of the centre during the 2020 ACT election campaign.

Molonglo Community Forum interim spokesperson Ryan Hemsley said the awarding of the $80,000 contract to Arup Australia was the first significant progress in a number of years towards a start on the town centre.

He said the first land release for the town centre is due in 2021-2022, and the community is looking to the ACT Budget later in 2021 for confirmation of this.

“We expect that timeline to be adhered to because anything further into the future is a clear-cut broken promise,” said Mr Hemsley.

But nothing can happen until the ACT Environment, Planning and Sustainable Development Directorate releases concept plans and a Territory Plan variation, which is expected mid-year.

“We can expect shops operating in the town centre sometime in the late 2020s, by which time Molonglo’s population will be larger than Weston Creek’s,” said Mr Hemsley.

“Any delays that happen now will have flow-on effects half a decade or more into the future.”

The move to a gas-free development is part of the Labor-Greens parliamentary agreement, and the project is seen as a model for the planned phase out of fossil fuels as part of the ACT’s bid to cut its greenhouse emissions from 1990 levels to zero by 2045.

While there will be no new connections to the natural gas mains network, the centre will have access to transitional arrangements such as tanks. 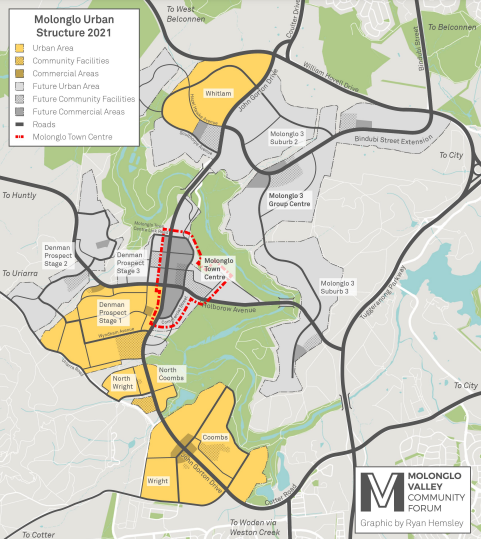 Map of where the Molonglo Town Centre will be located. Image: Supplied.

Arup Australia will look at the barriers and issues for businesses in a gas-free centre, such as the cost of commercial induction cooking, cultural preferences for gas cooking, and whether electric systems have enough capacity.

The ACT Government wants to know how to overcome these problems through innovation and possible financial incentives that may ease concerns and support adaptation, and how much these would cost upfront and into the future.

Arup Australia will identify typical uses in a commercial centre, including restaurants and cafes, shops and supermarkets, schools, offices and residences, and analyse ACT attitudes towards gas and electric services.

It will survey and consult with relevant stakeholders such as the Green Building Council of Australia; the Restaurant and Catering Industry Association of Australia; Canberra Institute of Technology’s catering school; local businesses; commercial suppliers; and building and plumbing organisations.

Arup Australia will also look at other similar sized centres in Australia and overseas that have gone down the gas-free route and how they were built and operate.

It will submit two interim reports to the ACT Government by 11 June and 25 June, and a final report by 30 July.

Easy. Just keep adding more taxes to the gas bills. $145 to turn off the gas at a suburban house or $740 to have the meter removed. Stupid— an incentive would be to make these free

So how will this substantial usage of electricity be generated probably through gas..

I attended a meeting where Shane Rattenbury & Evoenergy were guest speakers. They mentioned their aim was to remove Gas completely in the ACT.
I questioned them about apartments where we rely on one boiler system & do not have individual gas outlets, as I have looked at changing to electric & have been told I can’t.
I was then told gas prices will increase, due to pushing people to change to electric. Incentives will be given to those people willing to change. I asked what will happen to those who can’t change….not much of a response!
I also asked, will our gas prices increase & was told ‘yes’!

Sharee Schultz replace the shared gas boiler with an electric heat pump. You can sleep now

Jeff All maybe you should do some homework on heat pumps.

Jeff All if that was true, why was it not suggested? 🤔

Lee Eliadis are you saying there isn’t a commercial heat pump? For shared hot water systems?

Jeff All correct and we don’t have the infer structure to sustain it wind and solar do not work. Canberra is Allready looking at mandatory blackouts. So we’re does the power come from

Lee Eliadis are you legit?
When was the last blackout you had? Canberra infrastructure is better than anywhere???
Mandatory blackouts?

Let’s wait until the cost of deconstructing the gas network hits the pockets of average income Canberrans.

Mark Whithear this is new suburbs, which will cost less due to increased simplicity of piping etc

Any government worth their salt should be looking to set up our future with modular nuclear reactors.

Chris Newman what do you use for heating etc…electricity generated by burning coal or wood fired or are you self sufficient.

Chris Newman so how is it working now…batteries or are you cold…PS I also have rooftop solar as I have benefitted from middle class welfare..not everyone is so lucky…

Adrienne Sykes keep researching then… the grid is more than capable, with current technology. That is cheaper than gas and coal.

Adrienne Sykes we have electric wall heaters in each room and an electric (not induction) cooker. I think gas played a role when electricity was less efficient, but now I think it’s been overtaken again.

Adrienne Sykes it’s a temporary solution with no downsides, except that you can only do it when there’s someone to swap with. Eventually it’ll no longer be a problem.

“The ACT Government wants to know how to overcome these problems through innovation and possible financial incentives that may ease concerns and support adaptation, and how much these would cost upfront and into the future.”

This simply tells me that the ACT government are so incompetent that they made a decision to make the area gas free before ever considering how that would work.

I wish I could say I’m surprised, but poorly thought out virtue signalling appears to be standard operating procedure for them.

But will it have a supermarket?

Big cables and substations to run all the electric heating, cooking, hot water and EV’s.

Like your fellow Finns Marko, nuclear all the way.

Why did you spend all that money laying pipes for natural gas to Canberra???
.

Little chance that the Barr government and the woeful Planning directorate will deliver a decent outcome for Molonglo Valley residents. Their track record in the area has been appalling.

Anyone who can see how vulnerable Australia now is to economic and civil disruption (the ongoing pandemic has highlighted that) should have bottled gas, bottled water, a generator, 100 litres of motor spirit and lot’s of toilet paper because when TSHTF there will be none of the aforementioned items available from the usual sources. And you won’t have to worry if the electricity is renewable or carbonised because there won’t be any!

Just watch the bottled gas cylinders appear on the homes wanting gas stoves for cooking or gas log fireplaces. The old concept of bottled gas in the years before the Natural Gas network is new again!