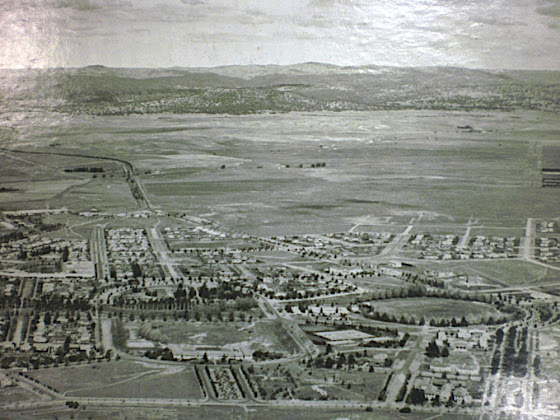 Aussielyn has sent this photo in with some questions:

— Can anyone date this photo of South Canberra?
— It is from a series that Archives ACT hope to have restored.
— The housing on the south side of Barrallier St Griffith is not yet constructed.
— The southern background is Murray’s Dairy farm “Kurrumbene”.
— I have dated it c 1930s. Can anyone add light?

Better be careful, this could easily end up in the ‘grey’ literature and be cited in IPCC publications (much like a now-discredited piece on Himalayan snowmelt).

Poor buggers, the drought is so bad the lake is gone!

global warming must have been bad back then!!

yes, i do indeed believe it was the style at the time 🙂

I heard Menzies drank it dry after somebody told him the pub was closed.

I heard Menzies drank it dry after somebody told him the pub was closed.

I hear that particular drought lasted until the mid ’60s. And to think people complained about the one just finished.

Poor buggers, the drought is so bad the lake is gone!

Its an aerial photo taken in the early 1940s most probably by the RAAF.

The circular patch of grass surrounded by trees is Manuka Oval. Stuart St Griffith is on the middle left. Another photo in the series shows the southern part of Griffith/Narrabundah (South of Bannister Gardens) yet to be developed. Houses in Bannister Gardens were completed in the early 40s.

Of course I should have written “Stuart St Griffith is on the middle right.”

The original photos can be viewed most weekdays at the ArchivesACT Reading Room upstairs at Woden Library.

Hotel Kingston didn’t officially open until Monday, 20 July 1936.
Supportive text from Wednesday 22 July 1936 edition of Canberra Times:
HOTEL KINGSTON
The transfer of the licence for the Hotel Kingston, which was opened on Monday, from Walter Patrick McGrath, of Griffith, to Alexander James Kay, of Canberra, was gazetted yesterday.

Context:
(Click here for relevant Canberra Times page, see bottom of middle column, just above the MAKE YOUR OWN COUGH REMEDY AND SAVE MONEY ad)

Lyn, I have attempted to identify some of the landmarks on the photo and have uploaded an enlarged version to here: http://vk2ce.com/South%20Canberra%20c1930s.jpg” here.
I have a 1933 map and the Hotel Kingston is not on it neither are the finished streets in Griffith so the photo is definitely after 1933, probably early 1940’s. If you can find out when the “Kingo” was built you’d have a better idea of the date of the photo.

…which was the style at the time?

The photo’s black and white?

You couldn’t get white onions, because of the war. The only thing you could get was those big yellow ones.

Just left on centre down the bottom, flat building with 2 seperated lanes leading up to it is Telopea Park School.

Thanks Skid for the advice & great nla hyperlinks. The date was just a rough guess.
I think I should now date the photo early 1940s, it was taken from an air force plane.

The book on the Narrabundah Prefabs is being put together by
Allan Foskett.
We are looking for corporate support to top up the heritage grant. Anyone able to help out please email me:
austinlynch60@gmail.com
Website: http://www.narraprefab.org/index.html

Its an aerial photo taken in the early 1940s most probably by the RAAF.

The circular patch of grass surrounded by trees is Manuka Oval. Stuart St Griffith is on the middle left. Another photo in the series shows the southern part of Griffith/Narrabundah (South of Bannister Gardens) yet to be developed. Houses in Bannister Gardens were completed in the early 40s.

The photo’s black and white?

The southern end of Barralier St wasn’t yet developed at the end of 1940.

Other than ‘Barralier St isn’t fully developed’, what else gives the impression that it was 1930s?

Alan Sargeant - 52 seconds ago
Ross MacPherson There are some government services that have tobe provided - health, schools, garbage collection and so on. I... View
News 64

Annie Wyer - 58 minutes ago
Mark Ryan actually no, I don’t. But it sounds like you’re a liberal voter who hates contributing towards the common good,... View
Margaret Freemantle - 1 hour ago
Got to be kidding to vote Libs in Canberra!! View
Mark Ryan - 4 hours ago
Annie Wyer sounds like you know someone who got let go from an over inflated over funded lazy parks n gardens service. Vital... View
News 4

Vicky Gregory - 1 hour ago
Why didn’t they look at the Qld model? Thousands of apartments on the Gold Coast , why be different? View
Nathan Giannasca - 2 hours ago
20yrs to late! View
k452 - 3 hours ago
You can read the debate by logging into the ACT Parliament website. I'm not sure when it was debated but there were sittings... View
News 12

Bella Twine - 2 hours ago
i should hope not its not humane ot legal to bury living people. View
Phil Andrews - 3 hours ago
Or anybody living outside the 10km radius Michael Ward 🤣 View
News 14

Fiona Dickson - 4 hours ago
Really the only answer is to stop logging. Removing debris is also damaging. View
Community 19

Michele Gorman - 6 hours ago
Ross MacPherson G Spot have done an amazing job, totally agree. View
Tenille Noja - 9 hours ago
Clearly stated on her page that it would ALL go to RFS trust. View
show more show less
*Results are based on activity within last 7 days

@The_RiotACT @The_RiotACT
From an all-local lineup bushfire benefit show to Abbey Road Live, here are the gigs worth catching in #Canberra this week https://t.co/ga0VbqGlcI (1 hour ago)

@The_RiotACT @The_RiotACT
A rock blasting company has turned the two boulders that blocked the Snowy Mountains Highway on Brown Mountain into rubble. Here's how they did it https://t.co/PBvLmAUWtR (2 hours ago)