Images of Canberra – Sunset on the Hume

Humbug sent in the following ripsnorter he shot at sunset along the Hume Highway. 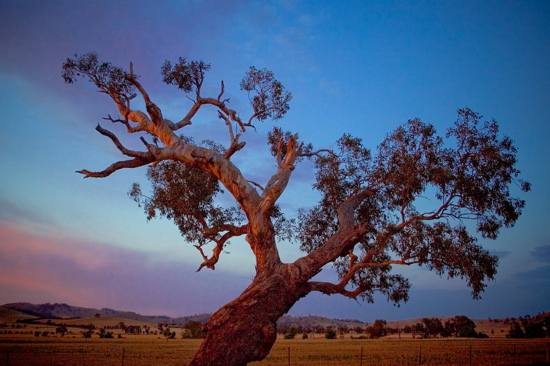 ok…If I take ISO 100 film and push it to ISO 400 then take an exposure, I need to develop the film as ISO 400 otherwise the image will come out undereposed. I need to leave the film in the developer longer. What I’ve done digitally is essentially the same. I shot at ISO 100 then in Adobe Lightroom I’ve increased the exposure…left it in the ‘virtual developer’ a bit longer if you will…increased exposure….pushed. If you use lightroom (try it…it’ free beta ATM) they refer what you do to a RAW file as ‘developing’ as that is what you are doing. In the film world the developing happens between taking the shot and viewing the image. Digitally it’s the same thing except we get the opportunity to muck around with things until we like what we see. It’s like developing film then changing your mind and re-developing it.

What you want to call it is up to you…digitally I increased the exposure 2 stops. The only other adjustments made is to dcrease luminosity of blue a notch, increase overal saturation, rotate to straighten the image and add a slight vignetting effect.

Whatever I’ve done to the image, I hope you like it.

still dont understand how you “pushed” it.

Did you make it lighter in photoshop ? adjust contrast brightness?

Is that what you mean ?

That is superb. Great catch!

oh….I managed to change my name from humbug to Bartron….1) this matches my flickr account and 2) it’s the name of my original account on riotact that I lost the password to and WordPress is having issues deciding if the name is registered or not.

Isnt pushing when shooting and developing film at a higher rated speed than what is marked?

Yup, and so I’ve done the digital equavelent here. The photo was shot at ISO 100 (same as shooting ISO 100 film) and the result adjusted 2 stops, so the same as developing that 100 film as ISO 400…i.e. pushed. At least that’s how I refer to it.

If I had the time I would have stayed another 10 minutes or while the light lasted. This was the only shot I got of the tree. As it was I had a child and pregnant wife in the car wanting to just get home.

Danman, you’re a film-man like me. That’s how I understand ‘pushing’ too. Things have moved on since….Interestingly, Humbug’s Canon 350 is what Santa’s bringing into the terubo household shortly – looking forward to finding out more about these new-fangled digital things!

Isnt pushing when shooting and developing film at a higher rated speed than what is marked? (ie longer time in chemical bath – warmer water etc)

Not too familiar with pushing on a digital.

All I do is keep the ISO at 100 (for my night photos) and shoot between f3.5 and f16 – and stopwatch it from there and make further adjustments after the shot.

Yeah, interesting. Years since I did any ‘serious’ photog. Would love to get back into it, tho’.

as far as noise is concerned I find that noise introduced via pushing is greater than by setting a higher ISO. I could have gone to ISO 400 on my camera and not introduces as much noise as by pushing by 2 stops (which is what I did to get this)

You dont want to raise the ISO – that would lead to un-necessary hot spots and grain.

f3.5 makes more sence than my f1 – I can see teh depth of field now that terubo mentioned it.

Good to see that the pictures of canberra have had the ante upped.

ok…for the photo nuts.
ISO 100 1/60 at f3.5 handheld looking over the car bonnet. I snapped it just as I was getting back into the car. If I had the patience I would have upped the iso but there you go. The original shot is quite dark…lots of pushing to get some detail and some noise reduction.

I also adjusted the colours a bit to get the blue sky and the red of the sunset.

I’d say 1/8th sec at f5.6 – background land ever so slightly soft, thus helping tree to ‘stand out’. Lovverly pic, Humbug, but if I may be so bold as to suggest a slight tilt-down would’ve shown the tree trunk on the ground which might have helped the overall composition…
-But there may well have been a fence or something in the way.

I’m just here in appreciation of the word ripsnorter. You don’t hear that enough.

Rauny Worm - 14 hours ago
Tom Porter ..there is a youth specific faculty but only for emergency treatment not for therapy. There are still so many gaps... View
News 6

Jacqui Donegan - 15 hours ago
Cooleman Court could (again) be a wonderful local precinct ... but it’s a mess - no parking, scrappy streetscaping, and a s... View
Angela Davey - 18 hours ago
Why not open shops in Coombs. Wright Denman Prospect before building more car parks. View
News 9

Conrado Pengilley - 16 hours ago
And how big is your risk fund on your investment property? View
Ashley Latimer - 1 day ago
Imagine investing in property and not having a risk fund set up lmao View
News 35

Chris Kubank - 18 hours ago
Lauren Ogden well said View
Randy Goldberg - 1 day ago
Domenic Fabbo three to six months or more. Basically, it'll be in place (if not stronger measures) until there is a working v... View
Lauren Ogden - 1 day ago
It is a shame that these stories are provoking aggressive reactions when we could be working together as a community. "One st... View
News 18

@The_RiotACT @The_RiotACT
It’s a long way from Young to Nashville, but 17-year-old Harry Cleverdon has been selected as a finalist in the 2020 International Songwriting Competition & you can vote for him in the People’s Voice award https://t.co/4EQKs7bIfT (4 hours ago)

@The_RiotACT @The_RiotACT
After a summer we’d probably rather forget, it’s time to turn the clocks back one hour as daylight saving ends https://t.co/JE6xNqRFsZ (6 hours ago)